Paul responded well by cobbling together a strong line behind the ridge.
I sent forward a formidable combined-arms attack, and both lines clashed with an immense ferocity.
The Brunswickers and Hanovarian Landwehr units fought like lions with support from British Heavy Dragoons and Dutch Hussars, and Horse artillery, and my attack was beaten back. 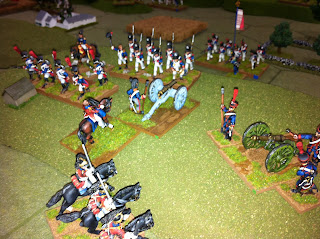 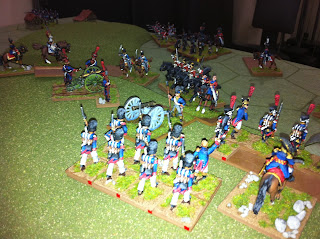 Now the pressure from the Prussians started to exert itself again. I was tempted to fall back to reorganize again, but realized that if I did, I might never regain the initiative, and would be ground down by superior numbers. Instead, I gambled with an 'Out of Ammunition' card, which allows me to move any five units, but afterward I must remove 2 artillery units from the battle. 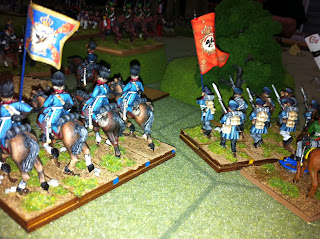 I moved my weakened cavalry forward again against the British right flank, supported by what was left of my infantry, and drove them back.  When Paul tried to counter with 2 fresh units of British infantry from his center, my Chasseurs heroically shot them down and forced them back as well. 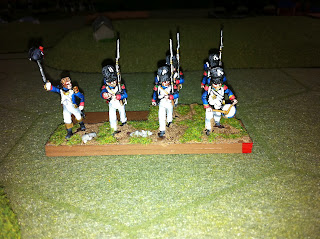 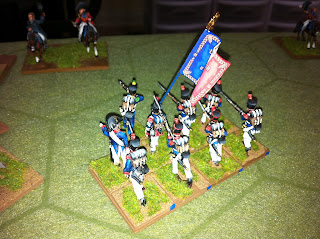 A half broken line of weakened militia grade infantry and Dutch cavalry clung to the edge of the battlefield. I knew that one more push could drive them off and break the British army's morale.  The infantry went forward once again with the skeletal remains of my heavy cavalry supporting it's attack.
The only fresh unit of infantry in that part of the field was French, and it marched to within 30 yards of the Brunswickers' square and fired... 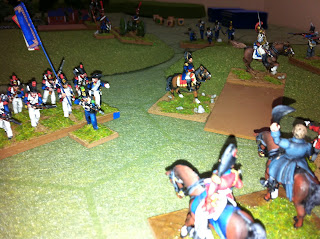 As the Brunswickers fled the field, they swept Wellington along with them and all cohesion went out of the British/ Allied force in that sector of the battlefield. The stream of retreating men soon became a raging torrent as the realization that the battle was lost spread from the broken British right to their center and then on to the left.  Soon, the Prussians saw that they stood alone on the field, and tried to retreat back from where they came.  Unfortunately Grouchy had been victorious at Wavre and they had no escape route. Those that did not flee, were soon rounded up.

Napoleon marched his victorious army into Brussels the next day. 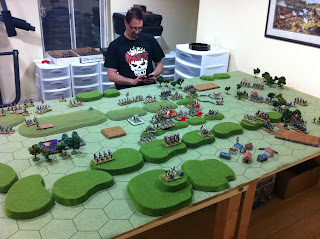 Paul texting about the game...Not sure his wife really cares, but who else is going to give him comfort?
Posted by Glenn at 8:29 PM 6 comments:

The movement of D'Erlon's Corps forced Paul to move more and more of his forces away from his right to support his left.  Therefore, I decided that I would leave D'Erlon's troops in position to strike and put some pressure on his weakened right. 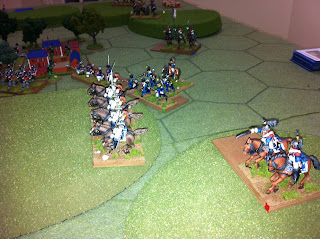 I moved 2 infantry and 3 cavalry units to my left and drove back the defenders that Paul/ Wellington brought forward to stop me. 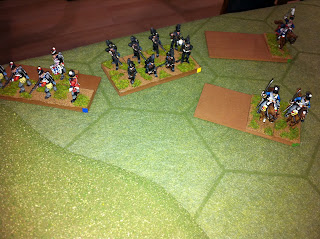 Unfortunately, Paul rallied his troops and pushed me back in turn.

Meanwhile, off to my right, the Prussians started to arrive on the battlefield.  my careful maneuvering had consumed a bit too much time. 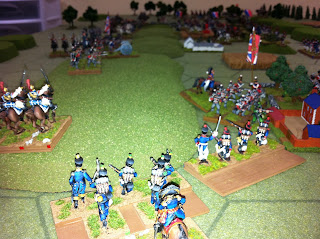 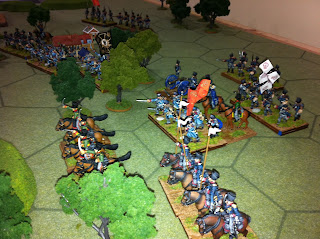 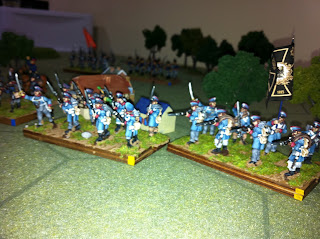 I knew that I needed to buy some time while I moved up reinforcements for a renewed effort on the left, so I organized a strong cavalry attack on the Prussian vanguard.  A vicious little cavalry fight developed. Charge and counter-charge occured, with both sides losing heavily. 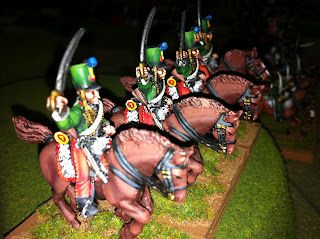 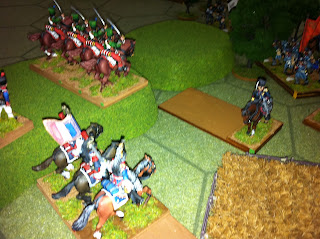 With the Prussian advance halted, I ordered up the Imperial Guard.  The Middle Guard and the Chasseurs rolled forward along with a division of line infantry and the Grenadiers a' Cheval to strike to the right of Hougoumont while, simultaneously a re-organized force attacked from the left. Both converged on the British Infantry holding the ridge behind the chateau.

The combined attack was too much for the British Infantry, and two Guards units broke and fled to the rear. 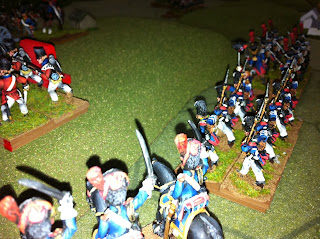 Today we used my House Rules version of Command & Colors: Napoleon to refight the Battle of Waterloo. 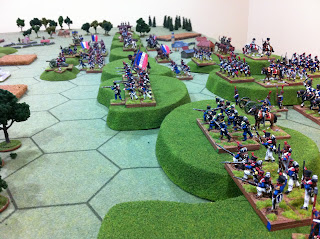 I was Napoleon, and my buddy Paul Niemeyer was Wellington.  The view above is from the French left (just in front of Hougoumont) looking toward the Grand Batttery. 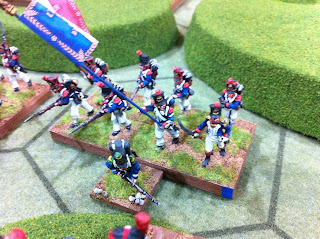 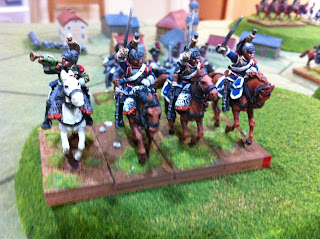 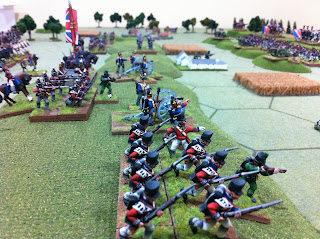 The British Line ready to receive the attack. 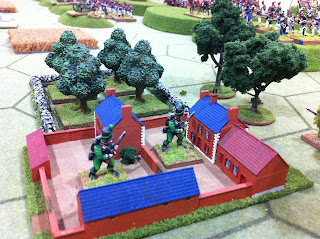 Skirmishers infest the Chateau, ready for the enemy advance. 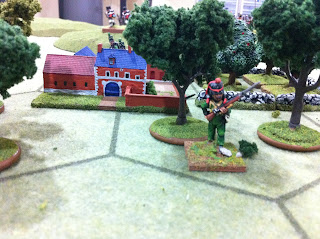 TURN 1 - 5  THE FRENCH ATTACK COMMENCES
The first few turns saw me moving D'Erlon's Infantry forward with cavalry support on both flanks, while the Grand Battery drove the Dutch/ Belgians and the British artillery off the ridge in front of them. 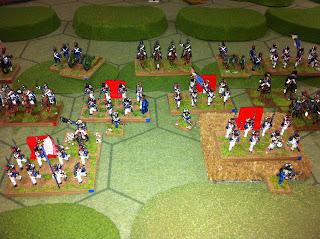 The red markers show that I formed the infantry into square near the base of the ridge; a necessary precaution as Paul had moved several units of British cavalry up to support the infantry just on the other side.
Posted by Glenn at 7:45 PM 3 comments: