Paul and I reconvened on Friday for Sushi and Gaming, and finished our re-fight of Eylau. 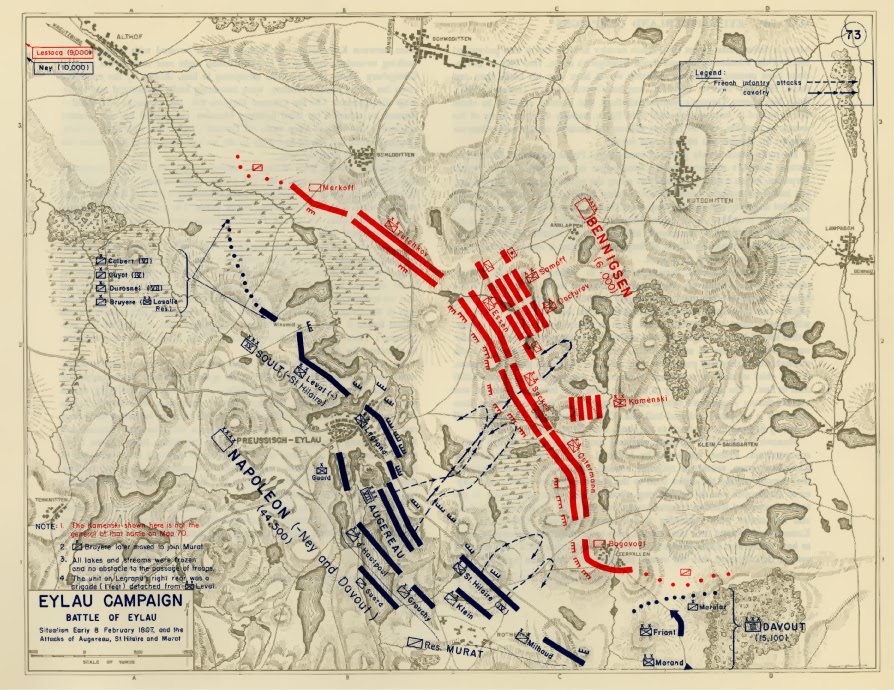 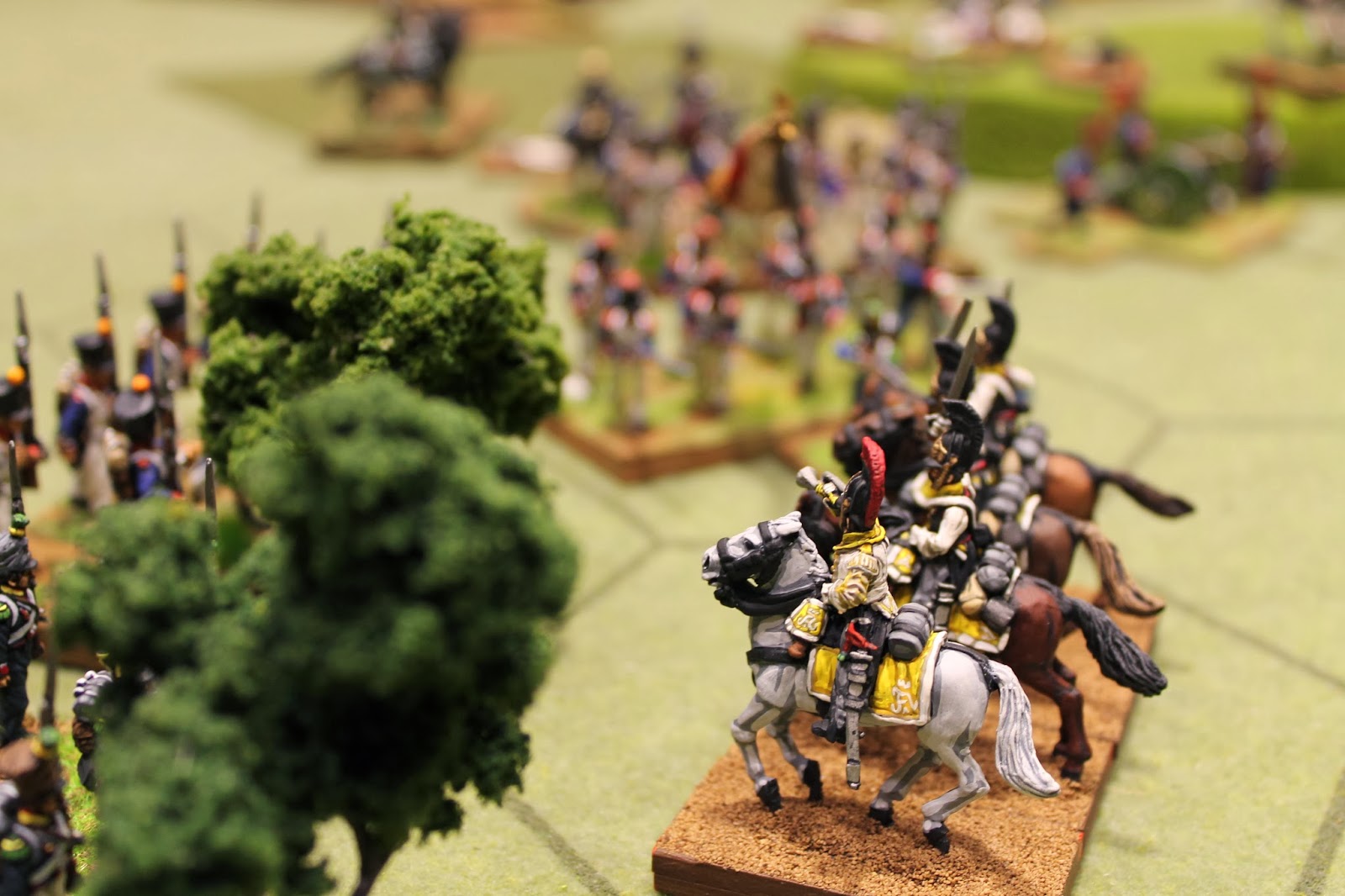 Steady fire from Davout's infantry drives off the Russian Cuirassier. 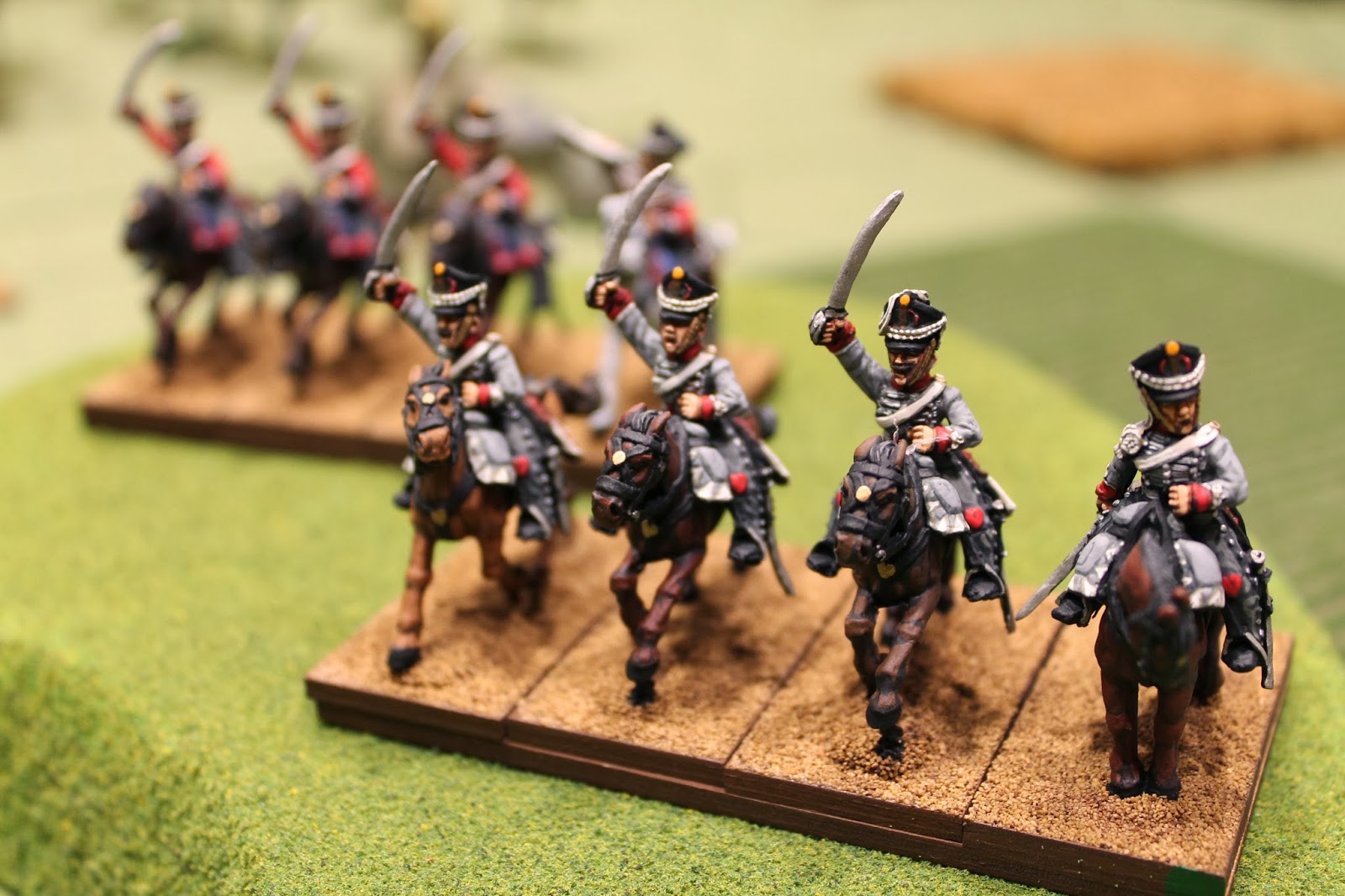 The Russian Hussars withdraw to the flank. 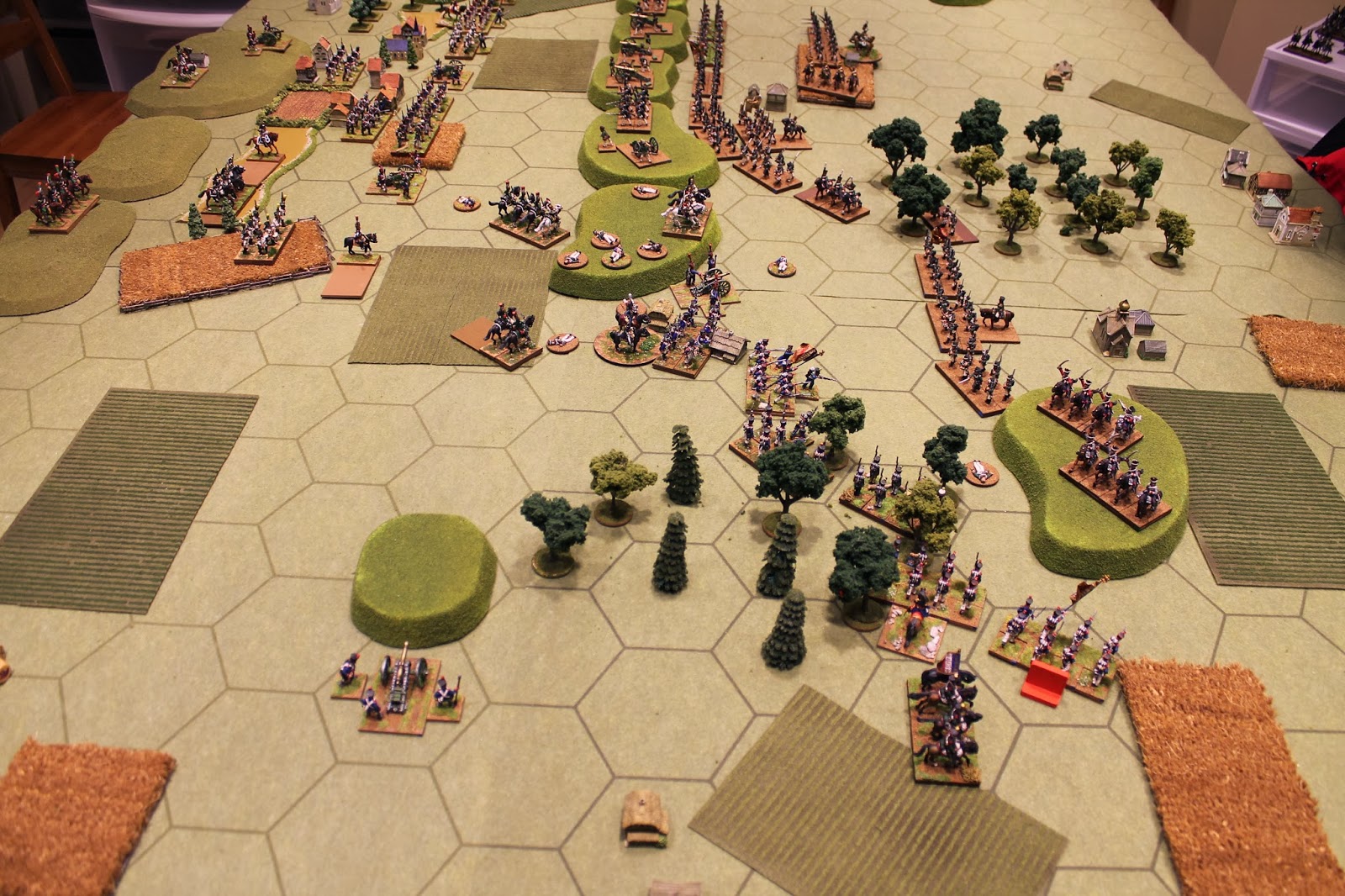 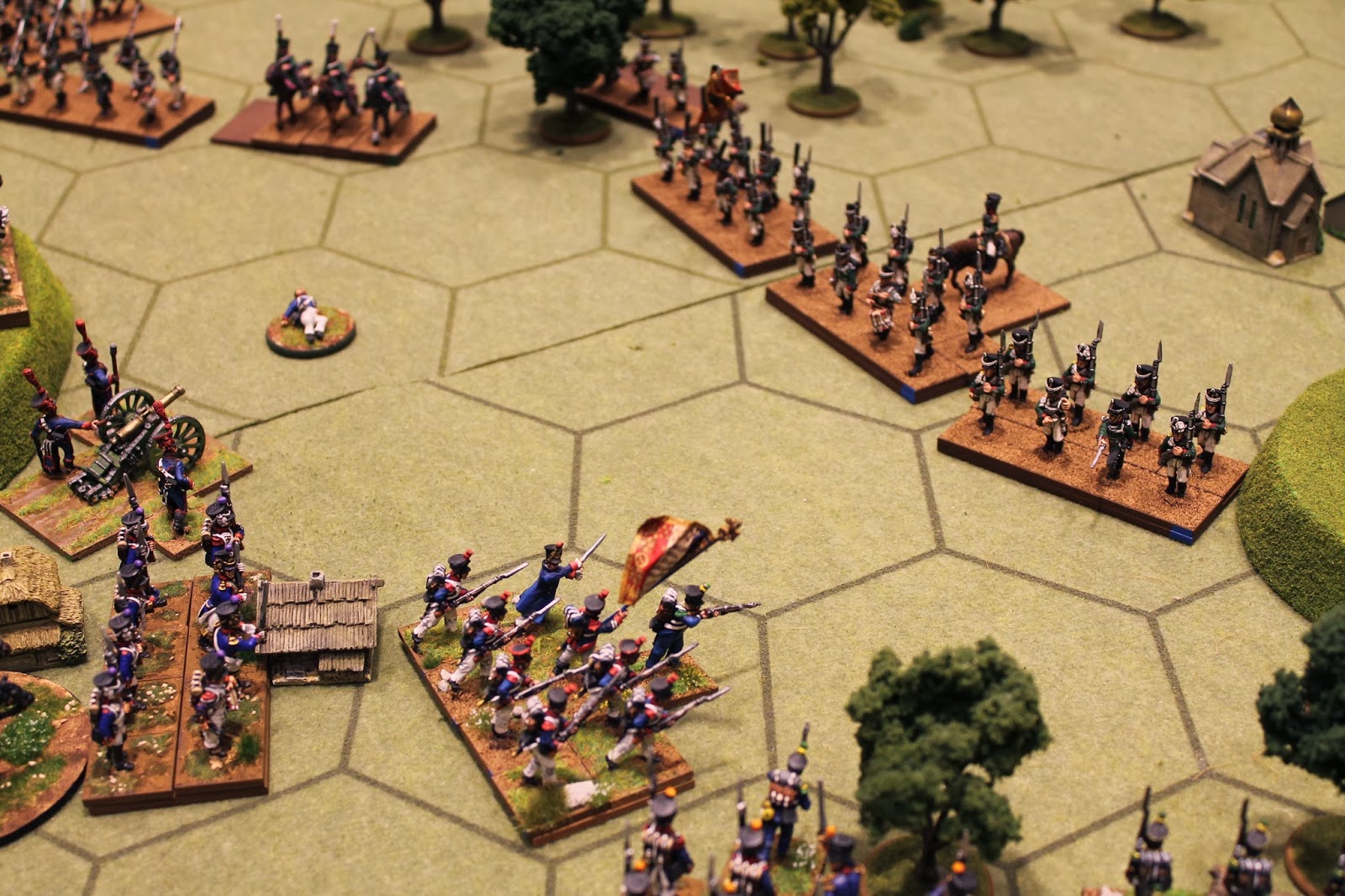 Davout's Infantry and the Russian Infantry face each other while the French cavalry is rallied and re-organized in the rear. 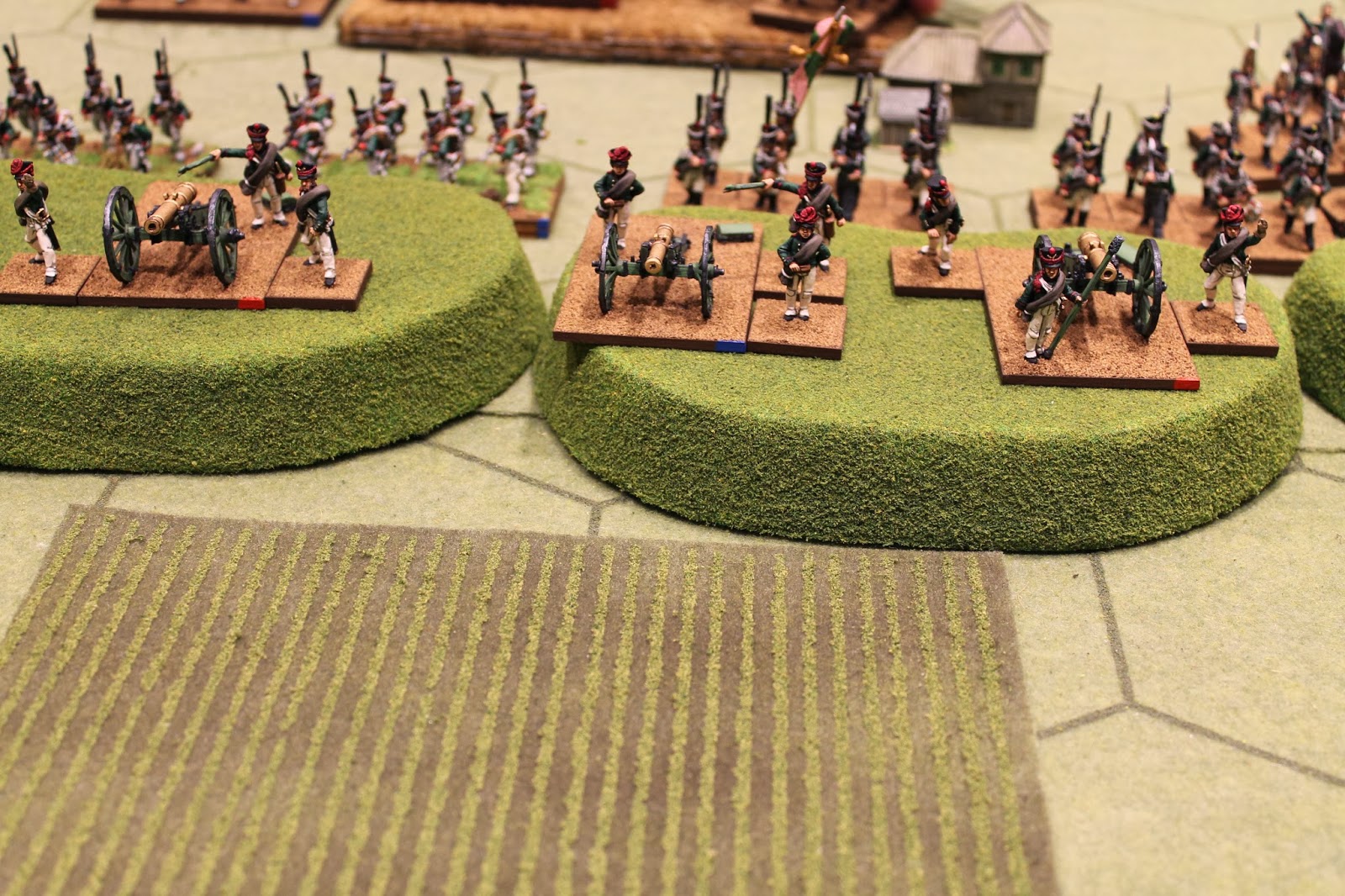 Meanwhile in the center, the Russians take advantage of the lull to launch a furious cannonade on the French Infantry in position in front of Eylau. 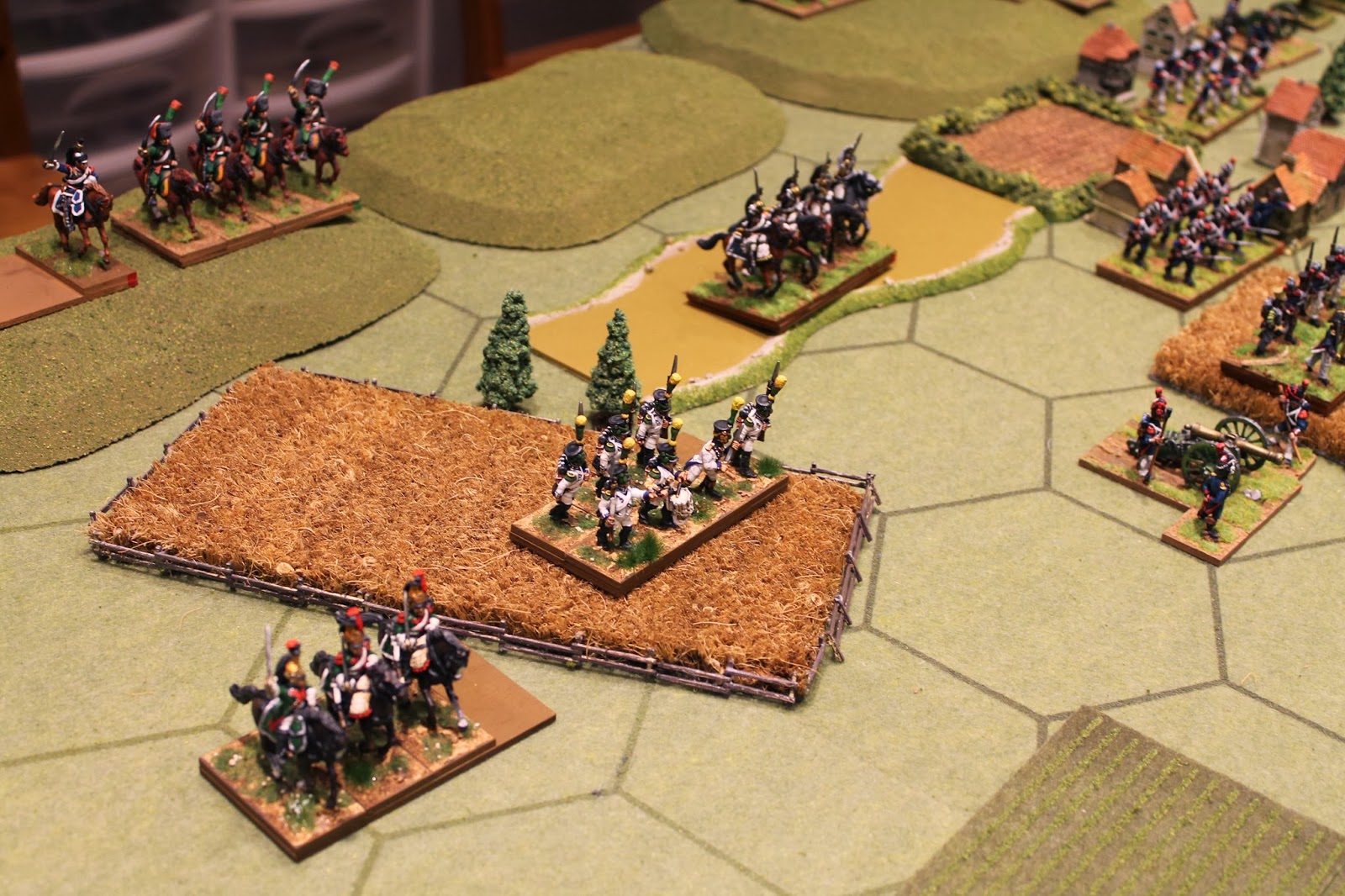 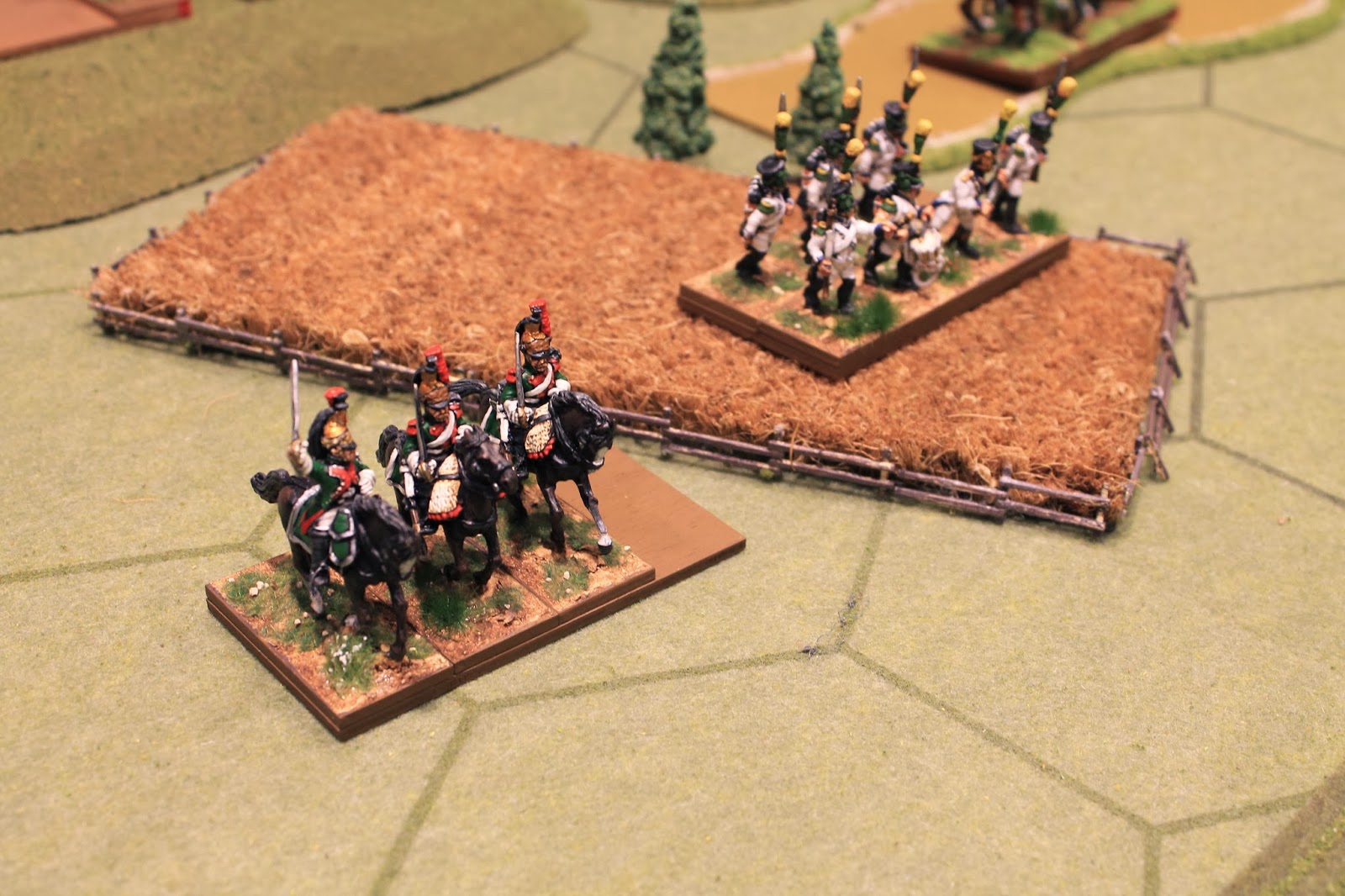 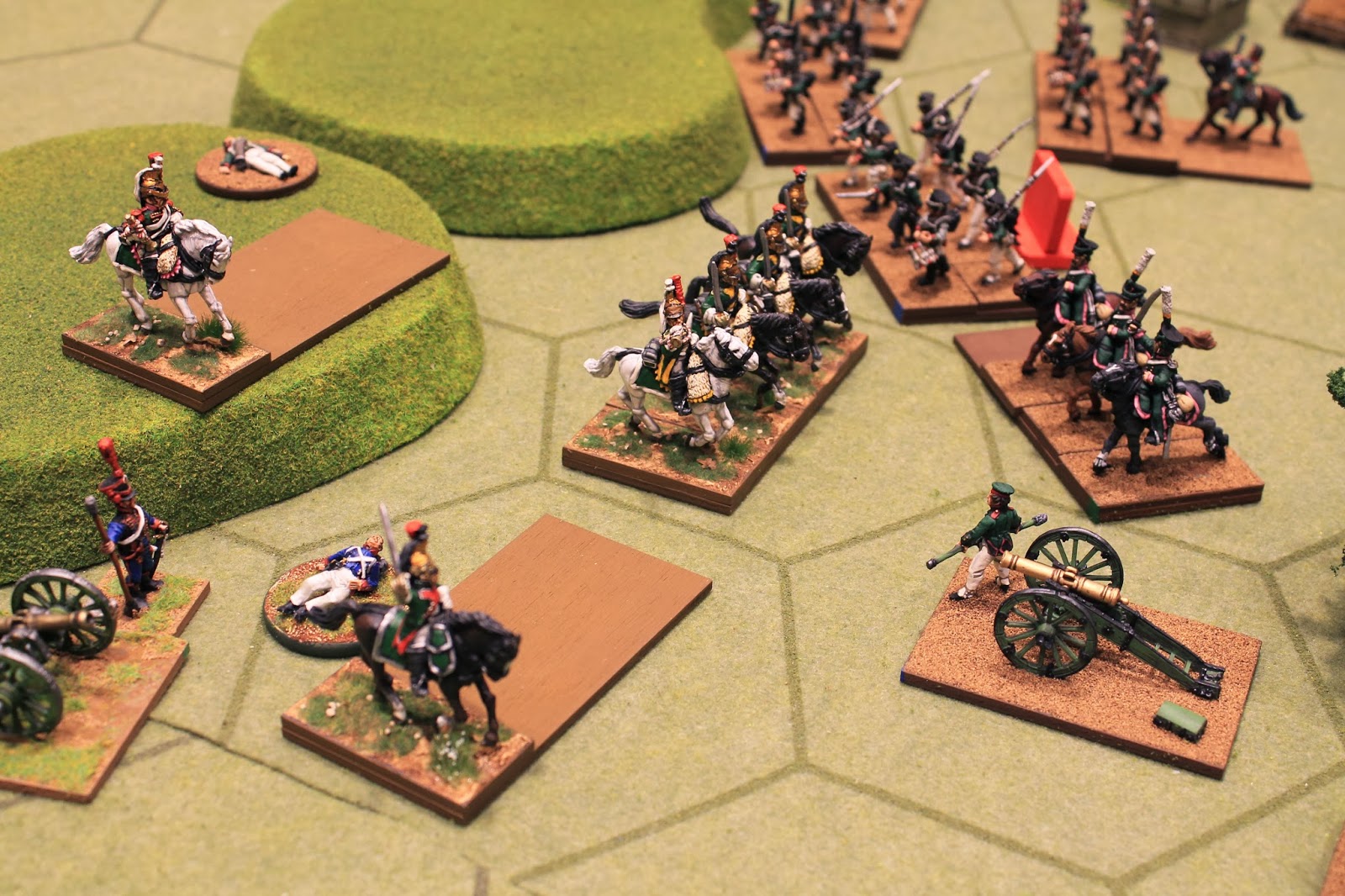 At 2:00 the battered, but re-organized French cavalry launches a new attack. 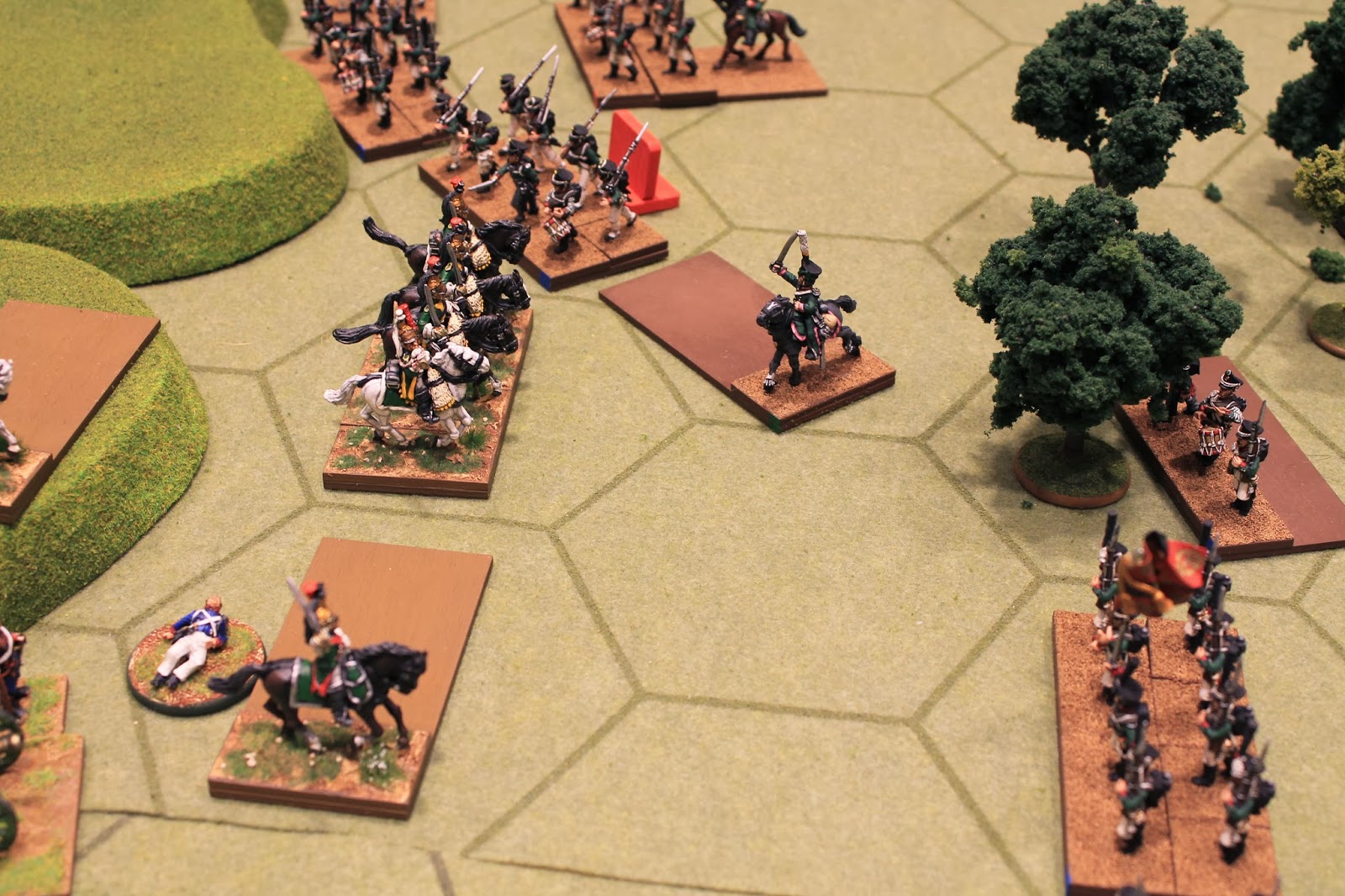 The attack overruns the last Russian battery in the south and inflicts heavy casualties on some Russian Hussars. 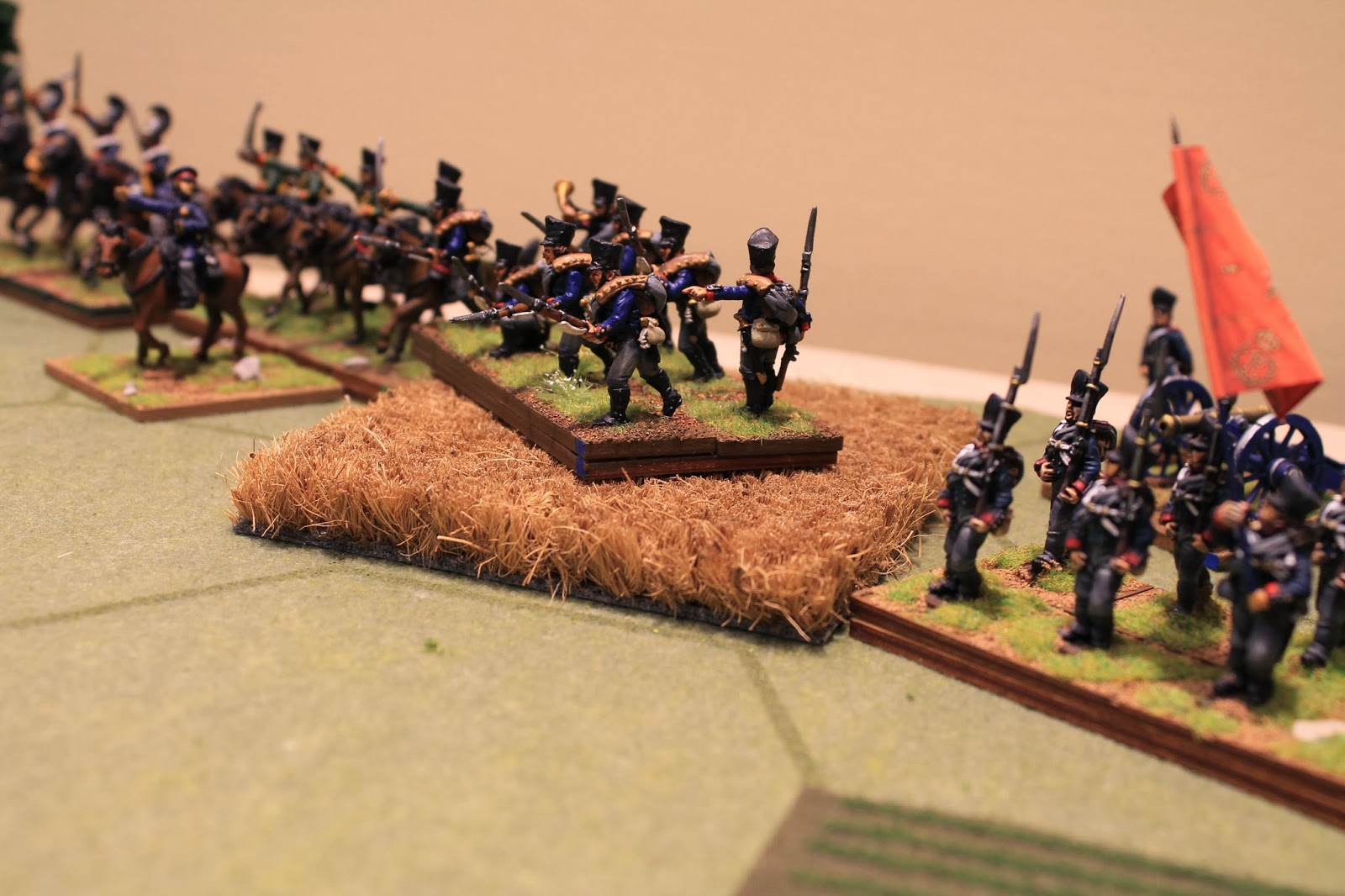 Meanwhile, on the north end of the battlefield, Lestocq's Prussian Corps arrives on the battlefield having left several battalions along its route of march to delay Ney's pursuing Corps. 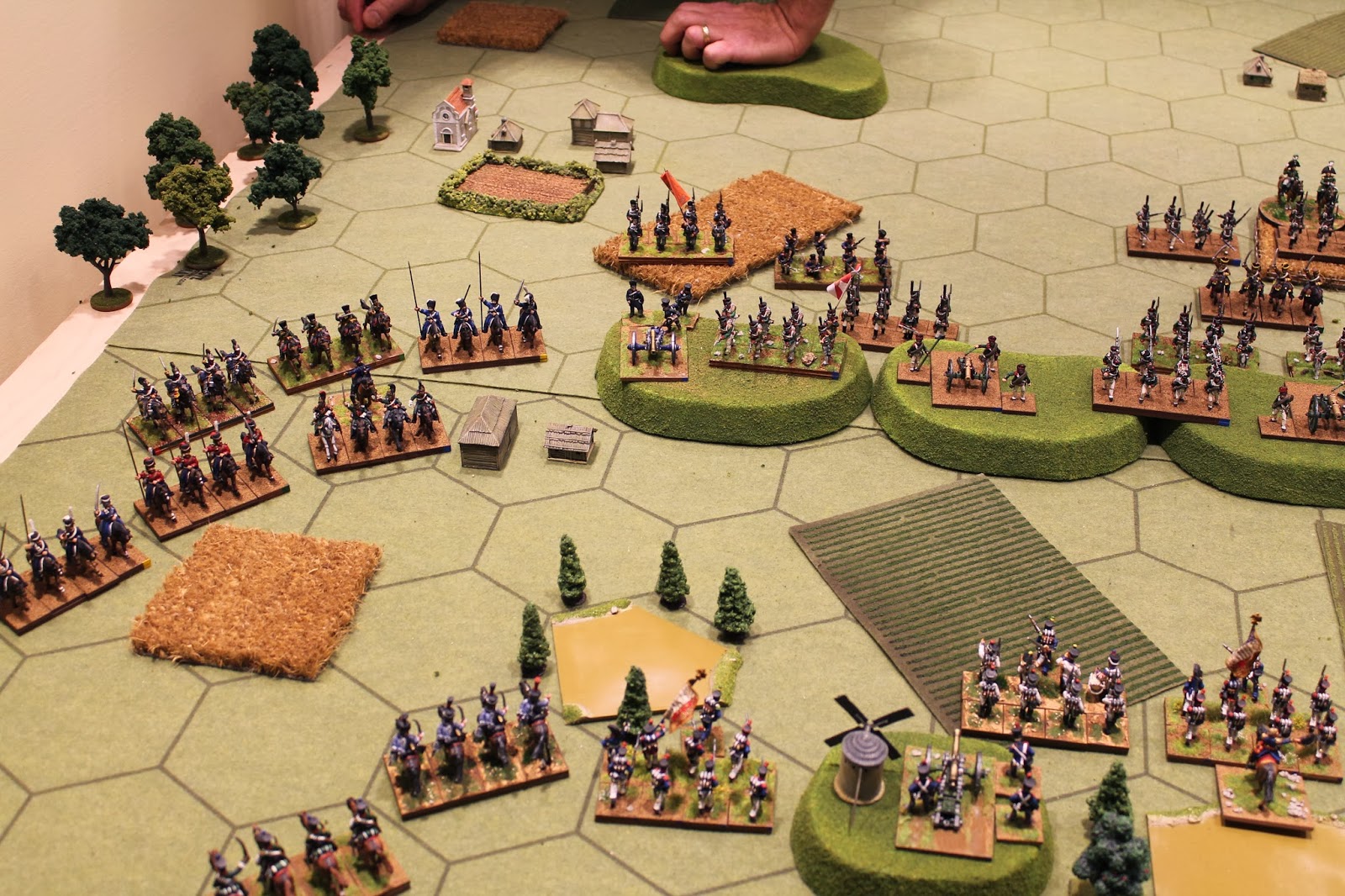 The Russian commander decides that despite the bloody battle raging in the south, that his new troops would have the most immediate impact by supporting an attack north of Eylau. Here they are coming into line between the Cossack screen and the Russian gun line. 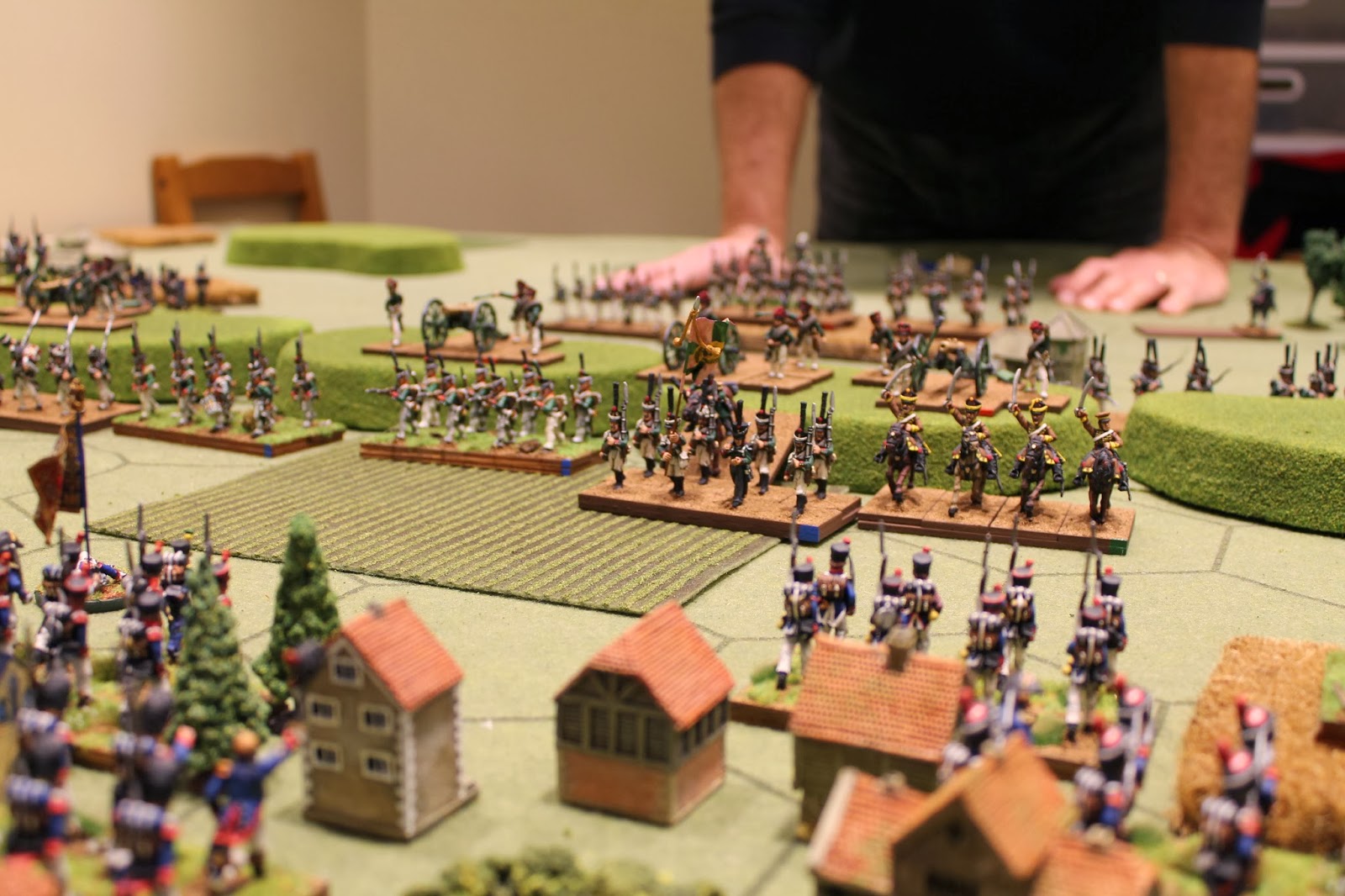 The Russian Infantry behind the gun line starts to deploy for the big attack. 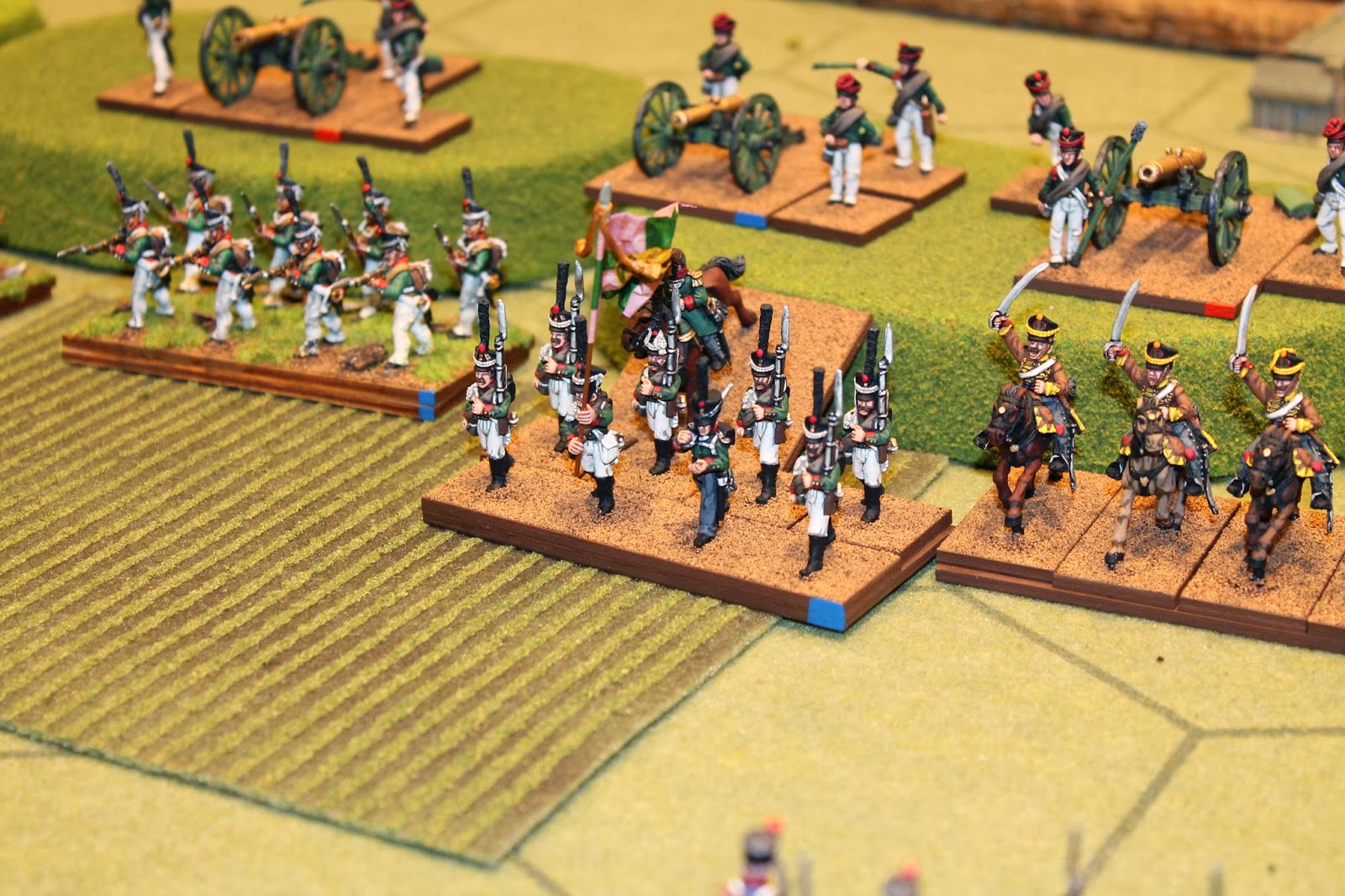 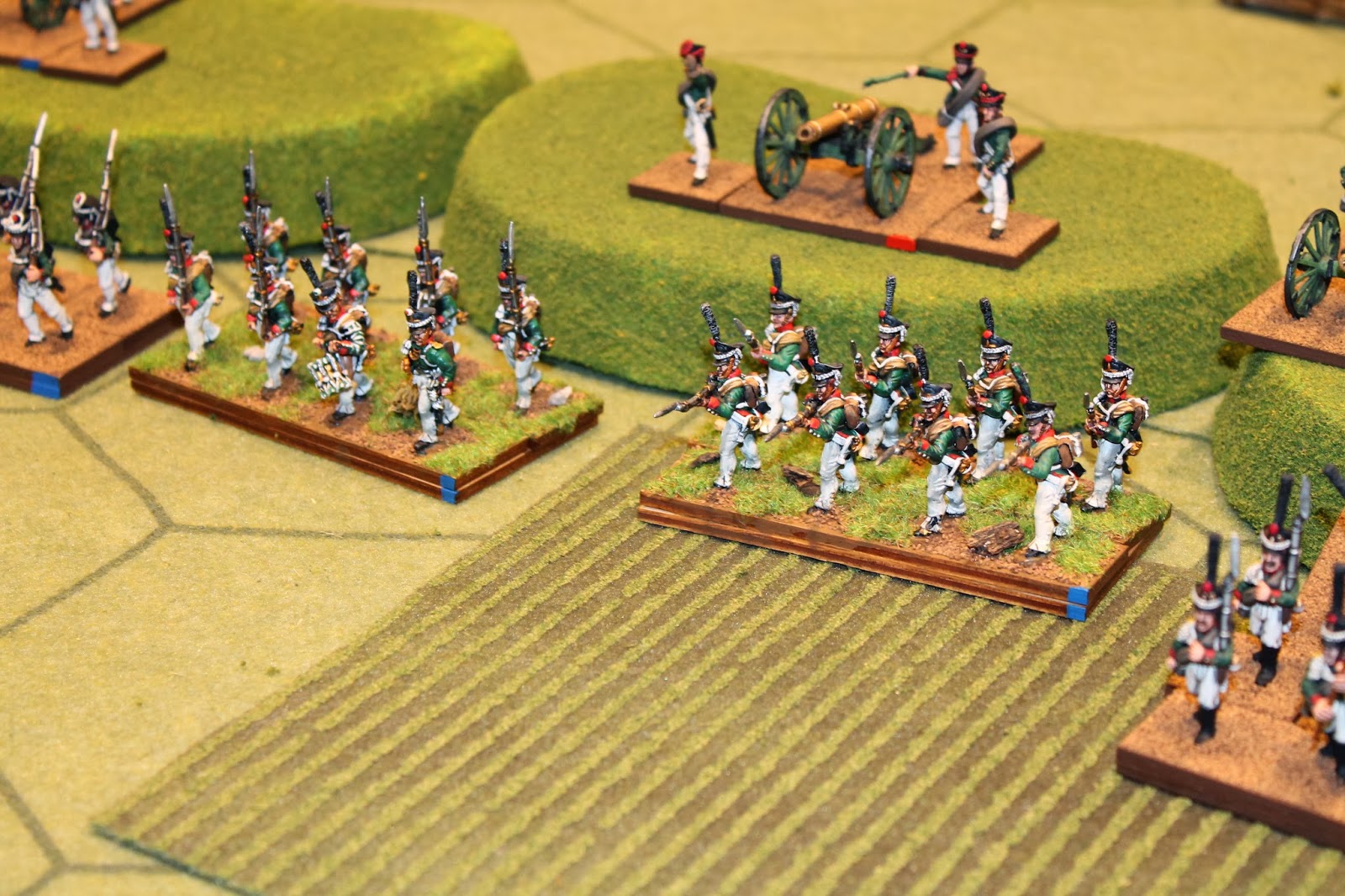 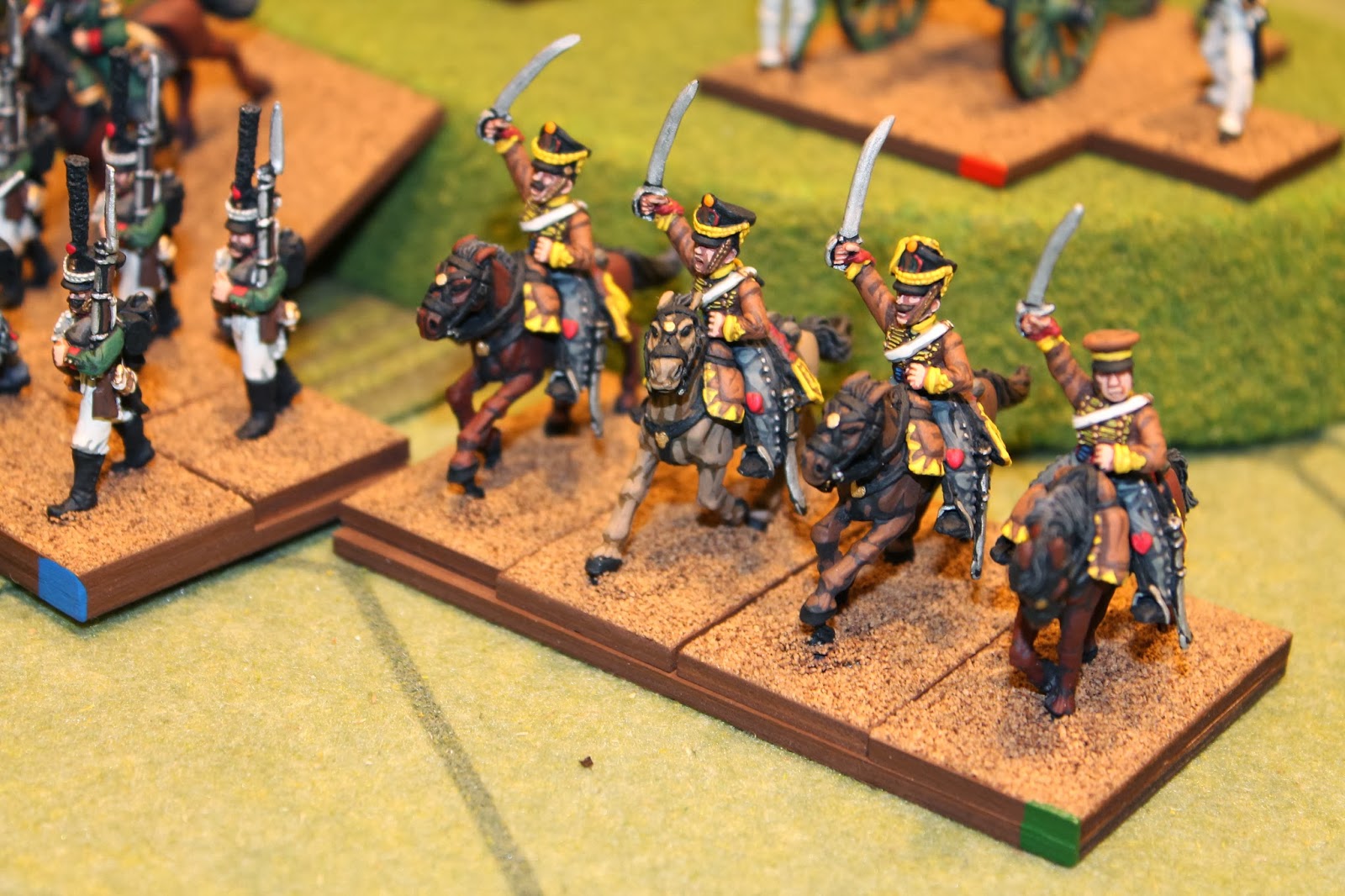 Napoleon starts getting nervous as the forces arrayed across from Eylau look imposing and the Russian artillery barrage has been taking a toll for two hours. He pulls back his infantry into the town and refuses his left flank. The best hope for a French victory is for Davout to finally break the Russian left flank and for Ney to show up behind the Russian right before the French center can be overwhelmed. 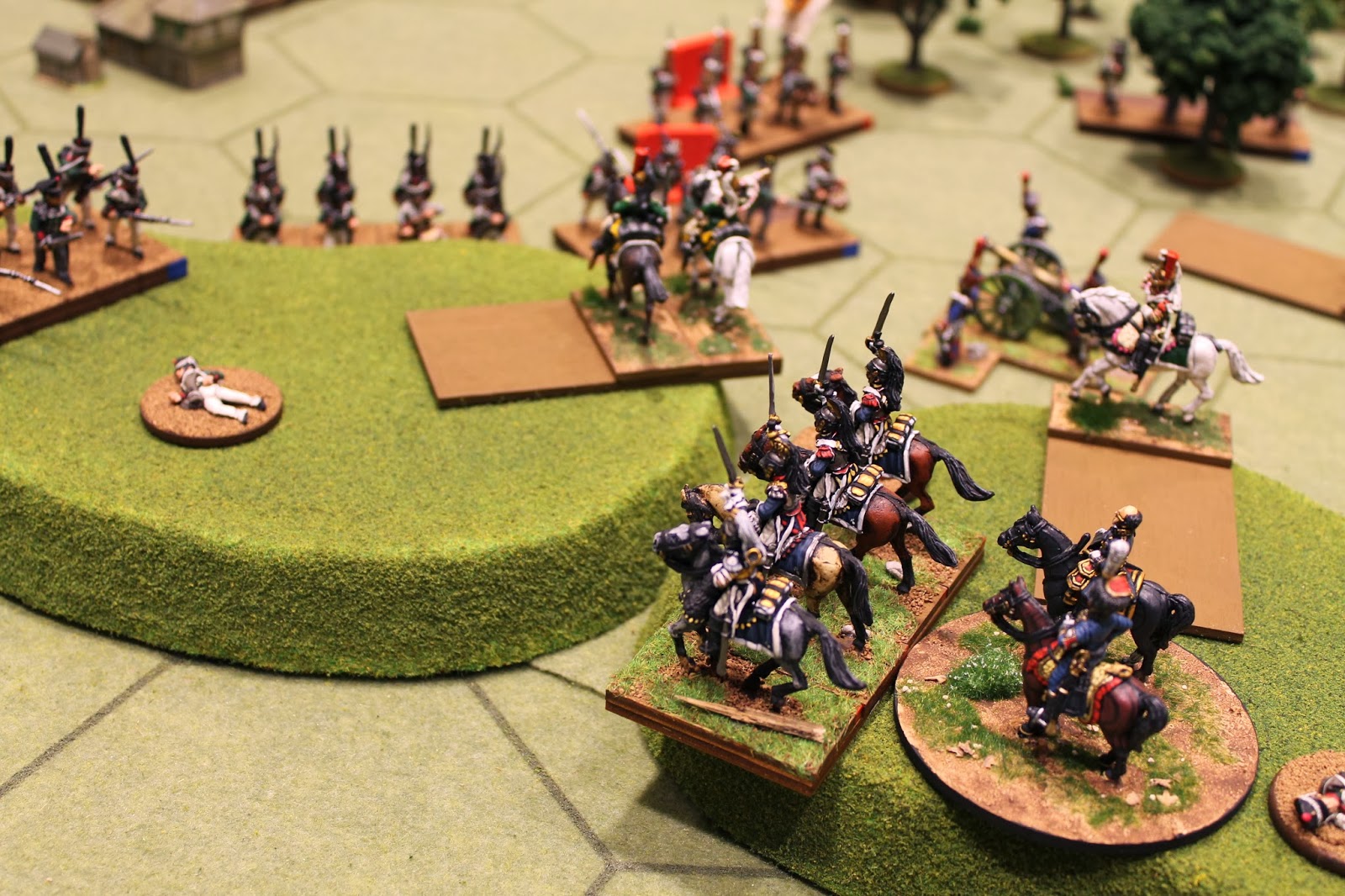 Back on the south flank, Davout has finally got the French cavalry re-organized and committed to the attack again. 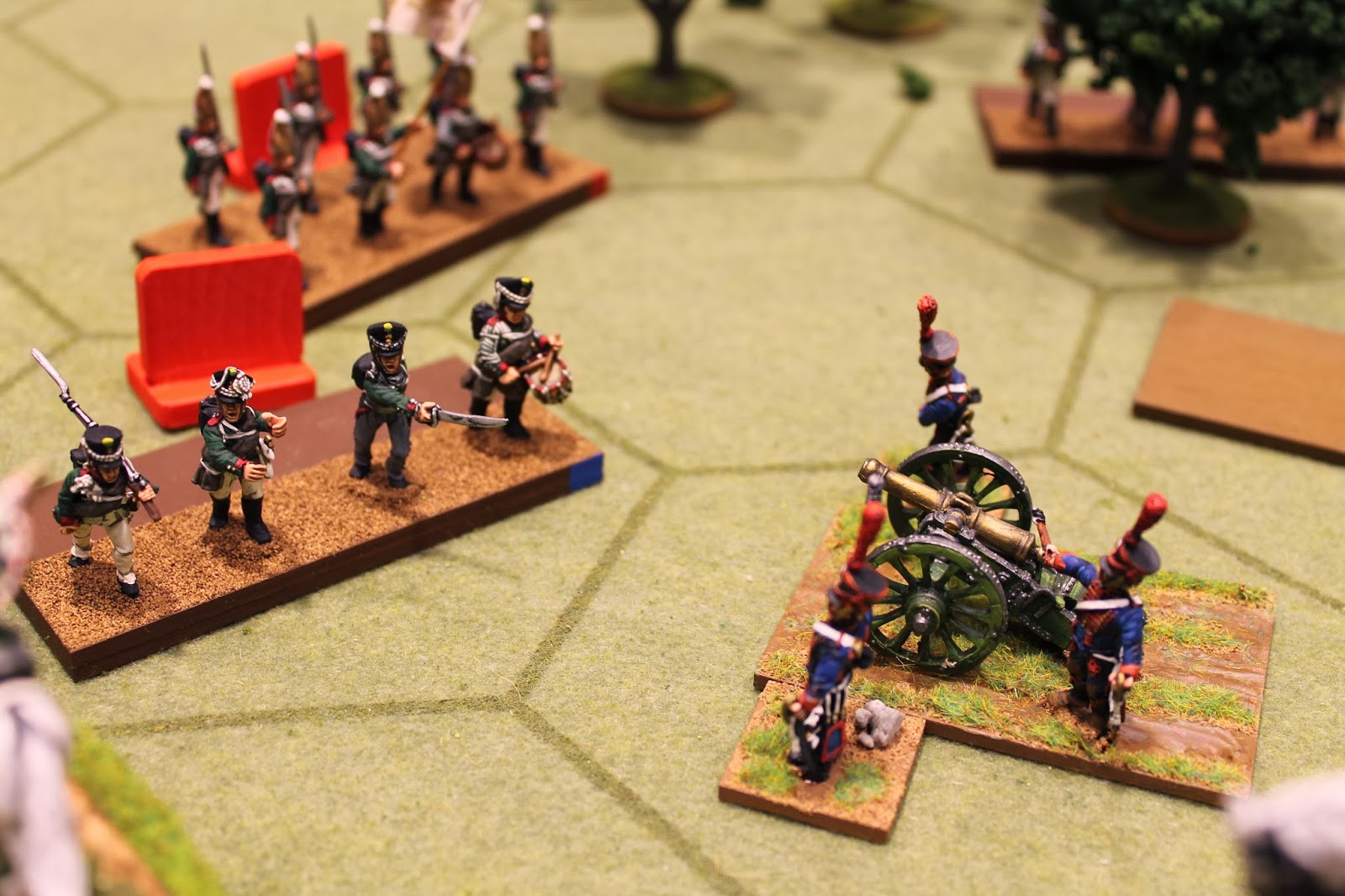 Here a French horse artillery unit blasts a Russian Infantry unit that has been forced into square.
The casualties are immense and the unit is nearing the breaking point. 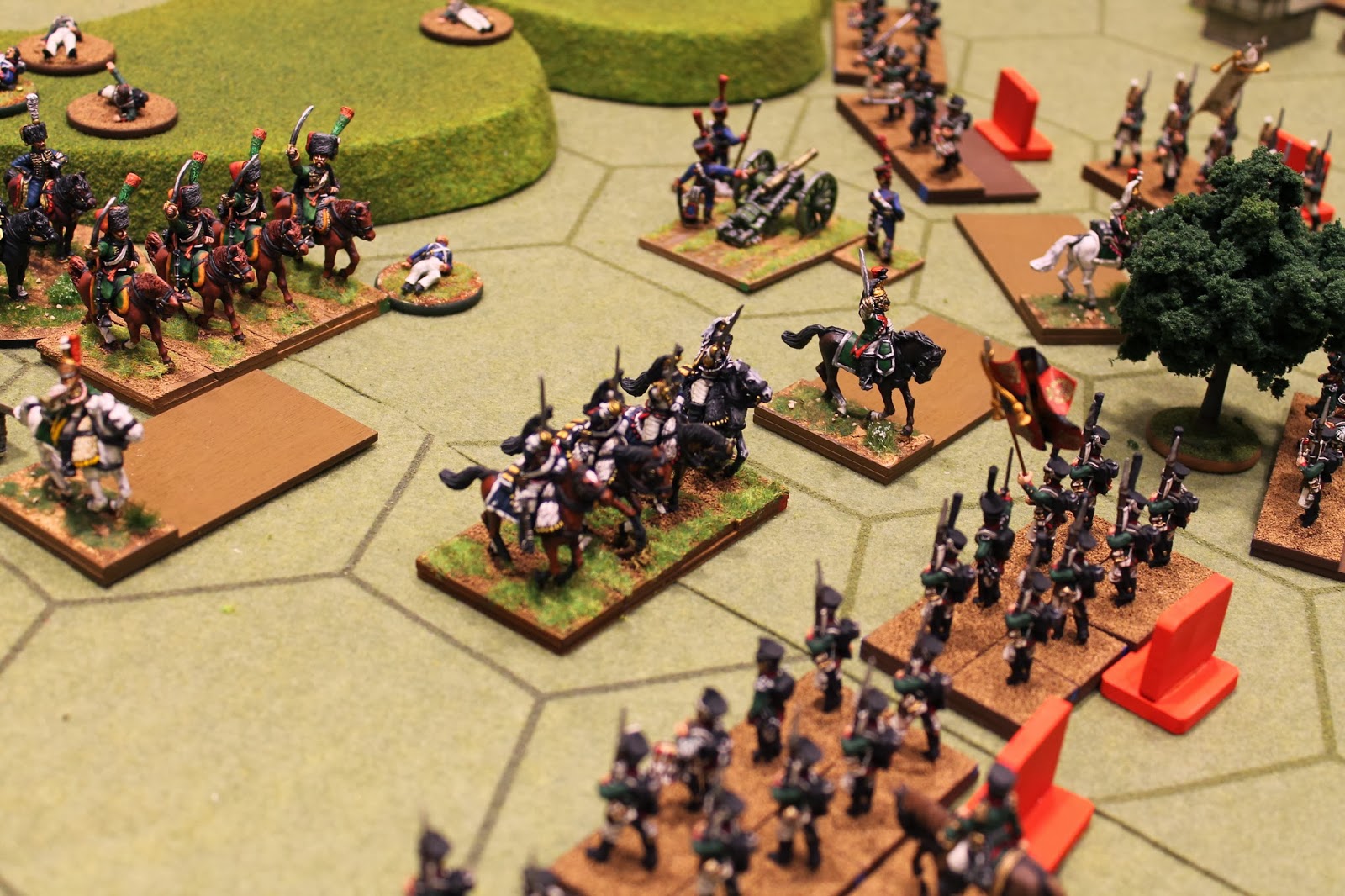 Charge'!
Form Square!  The Russian line, now without artillery support and without significant cavalry support is helpless to do anything but form square and hope. 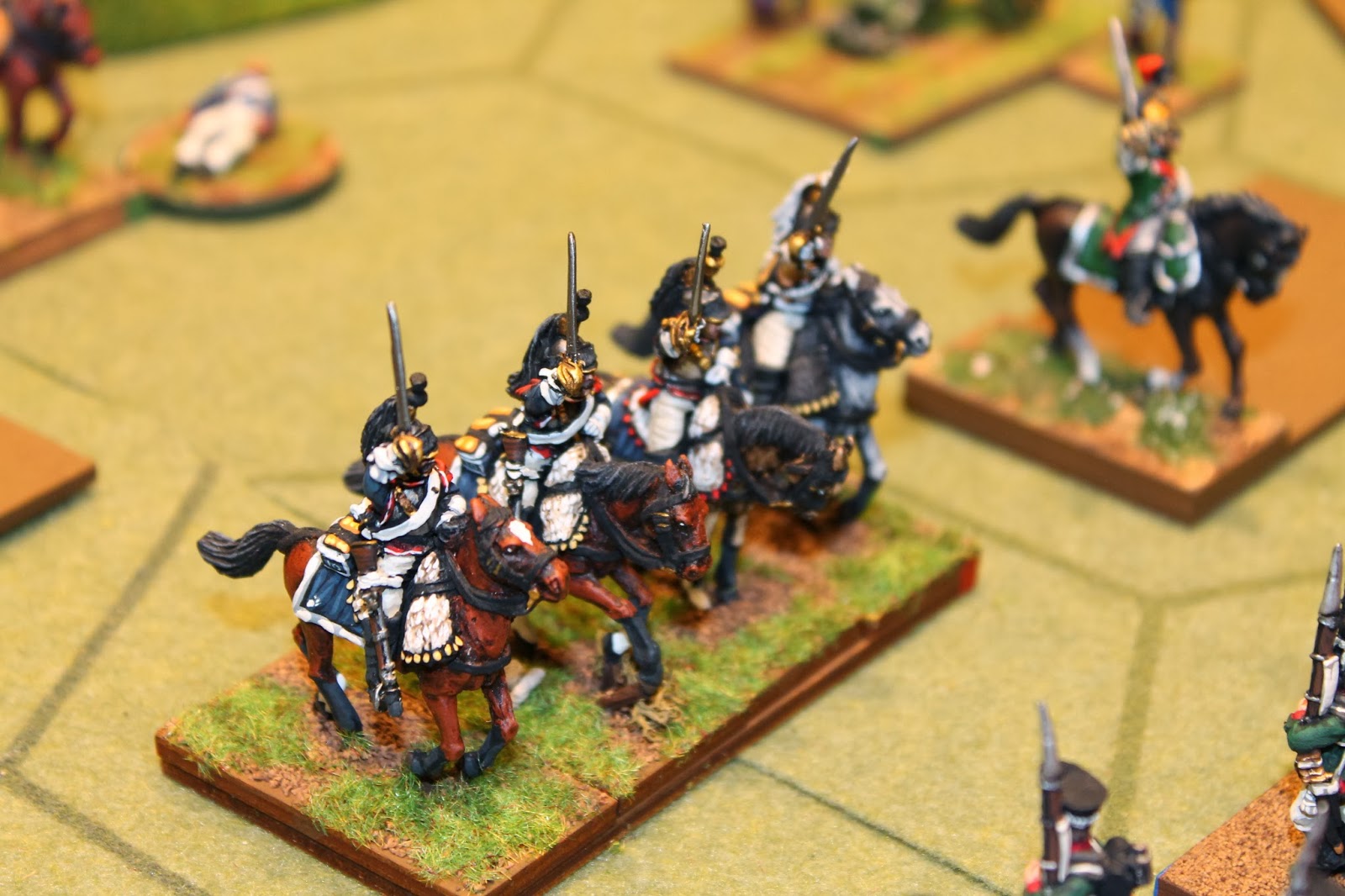 Unfortunately my camera somehow lost the pictures from here. Not sure why.
Here is a chronology of the rest of the battle:

4:00 The Russian artillery continues to punish the French near Eylau
In the south, Davout moves up his infantry to attack the Russian infantry now trapped in square.

5:00 The Russian line in the south cracks and flees north and east.

6:00 The French mop up the remaining Russian forces in the south and drive toward Lampasch and the main Russian line of supply.

7:00 The Russians launch a counter-attack with their infantry into the woods west of Lampasch that drives the French out, but Davout successfully seizes the town with a force of 2 infantry divisions and two somewhat battered cavalry divisions in support. They are now separated from the main French line, but are in a strong position to fend off Russian attempts to re-open the main route of retreat.      In the north, Ney's Corps arrives and seizes Schmoditten to the right rear of the main Russian position.

8:00 The Russians pull back their forces that were forming up for the attack on Eylau and face off the new threat from Ney. Lucky for the French they waited too long to launch the attack.

9:00 French forces from the south and west converge on the woods west of Lampasch and threaten the Russian forces there.  Fighting finally sputters out with the Russian army completely battered and almost completely surrounded. The Russians ended the fighting with 17 units eliminated and the French 8. Complete victory for the French. Vive le Emperor!

Post Script:
The Russian commander, desperate, orders his army to attempt to break out to the east and to re-form as best they can at Friedland. Some units blunder into Ney's forces around Schmoditten or Davout's men near Lampasch. They are rebuffed in disorder, adding to the confusion of the retreat. Others are lucky enough to head cross-country between the French forces and escape. However the confusion and disorder wrought on the remaining Russian forces makes them easy fodder for the pursuing French cavalry the following day. The harassed and demoralized Russians that manage to trudge, exhausted into Friedland are easily defeated and scattered by Soult and Ney's fresh Corps over the following days.
Posted by Glenn at 8:39 PM 4 comments: