Here are the other units in my Bugbear army waiting to be painted (plus 2 more crossbow units). 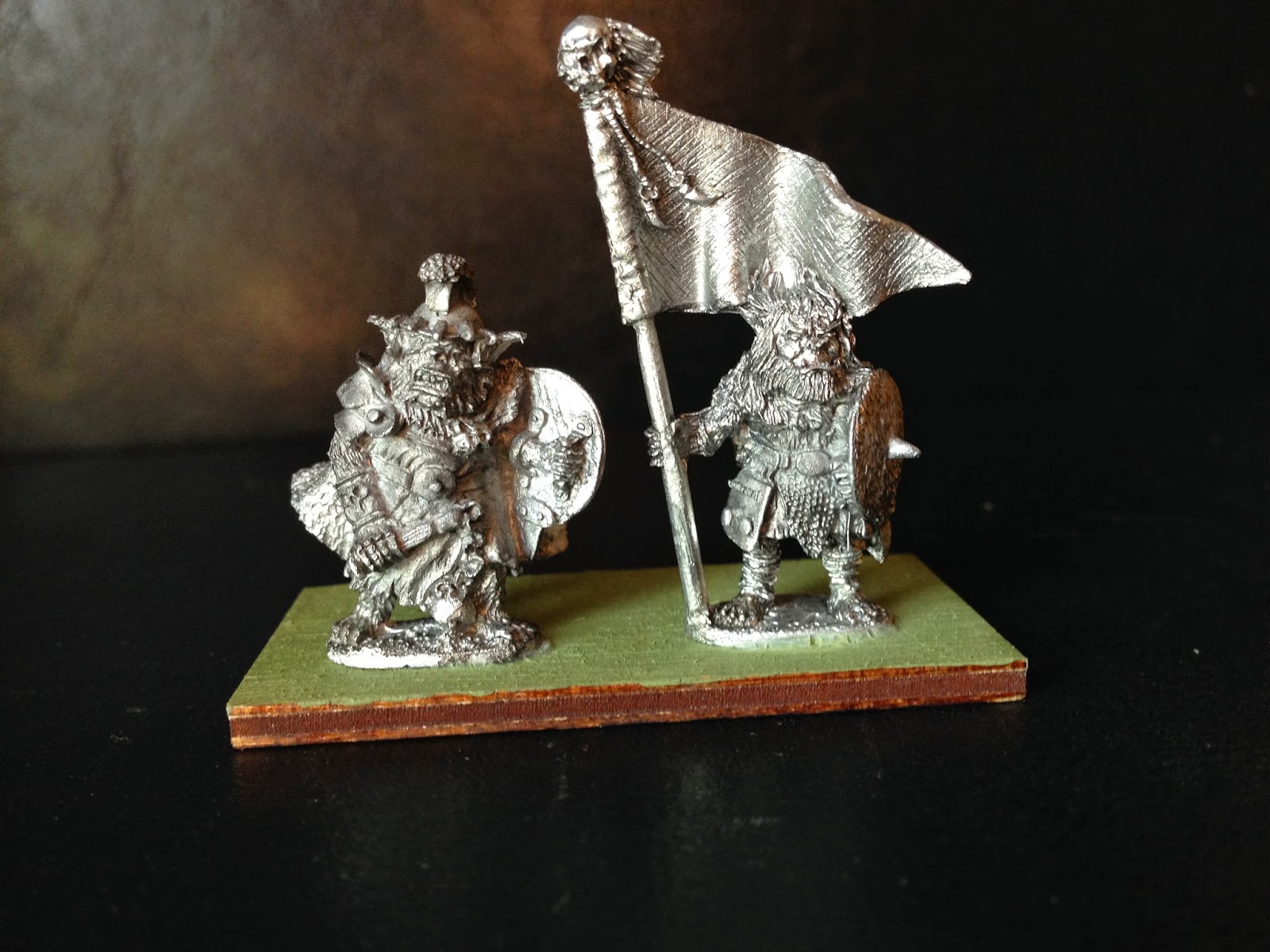 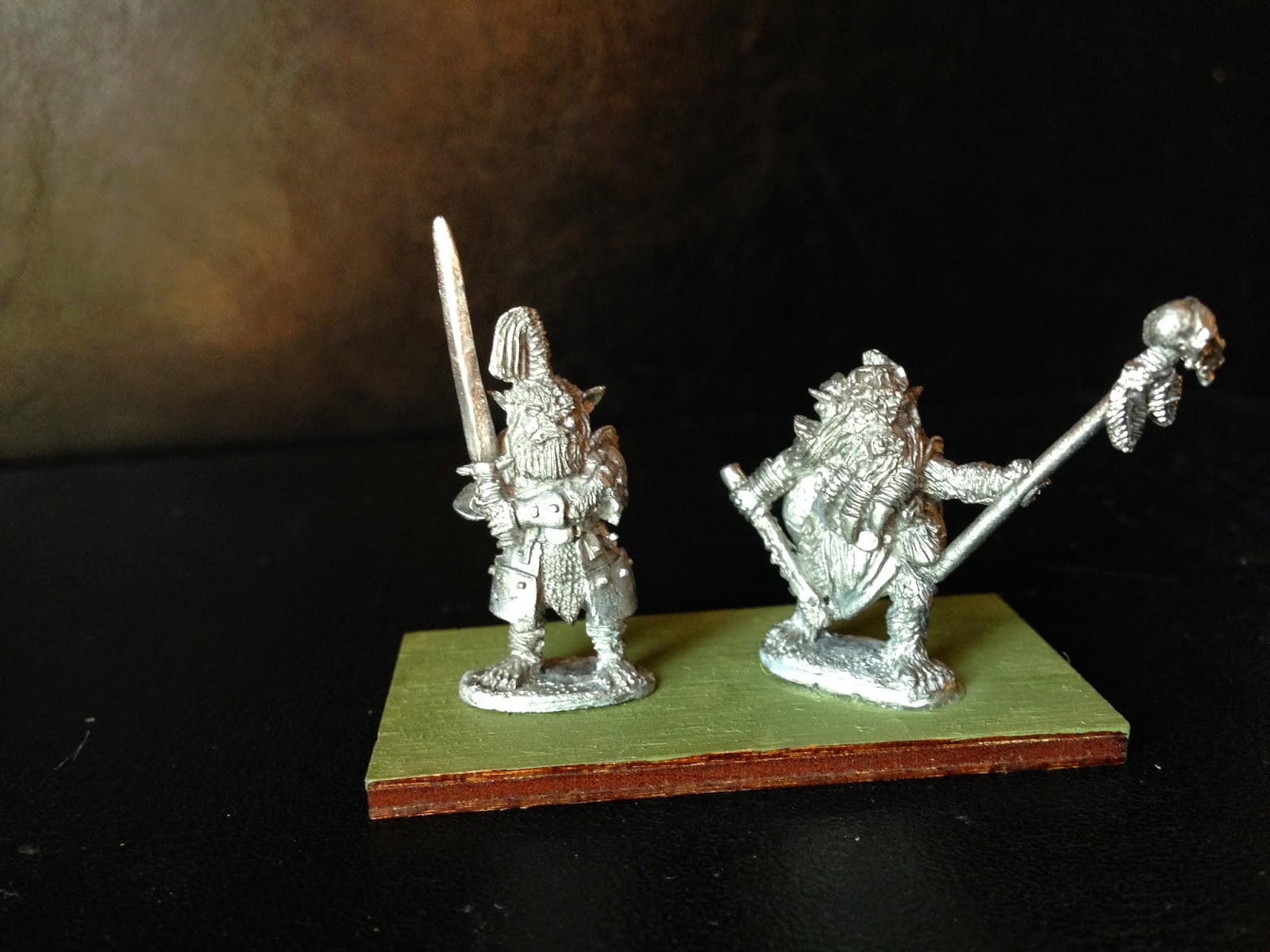 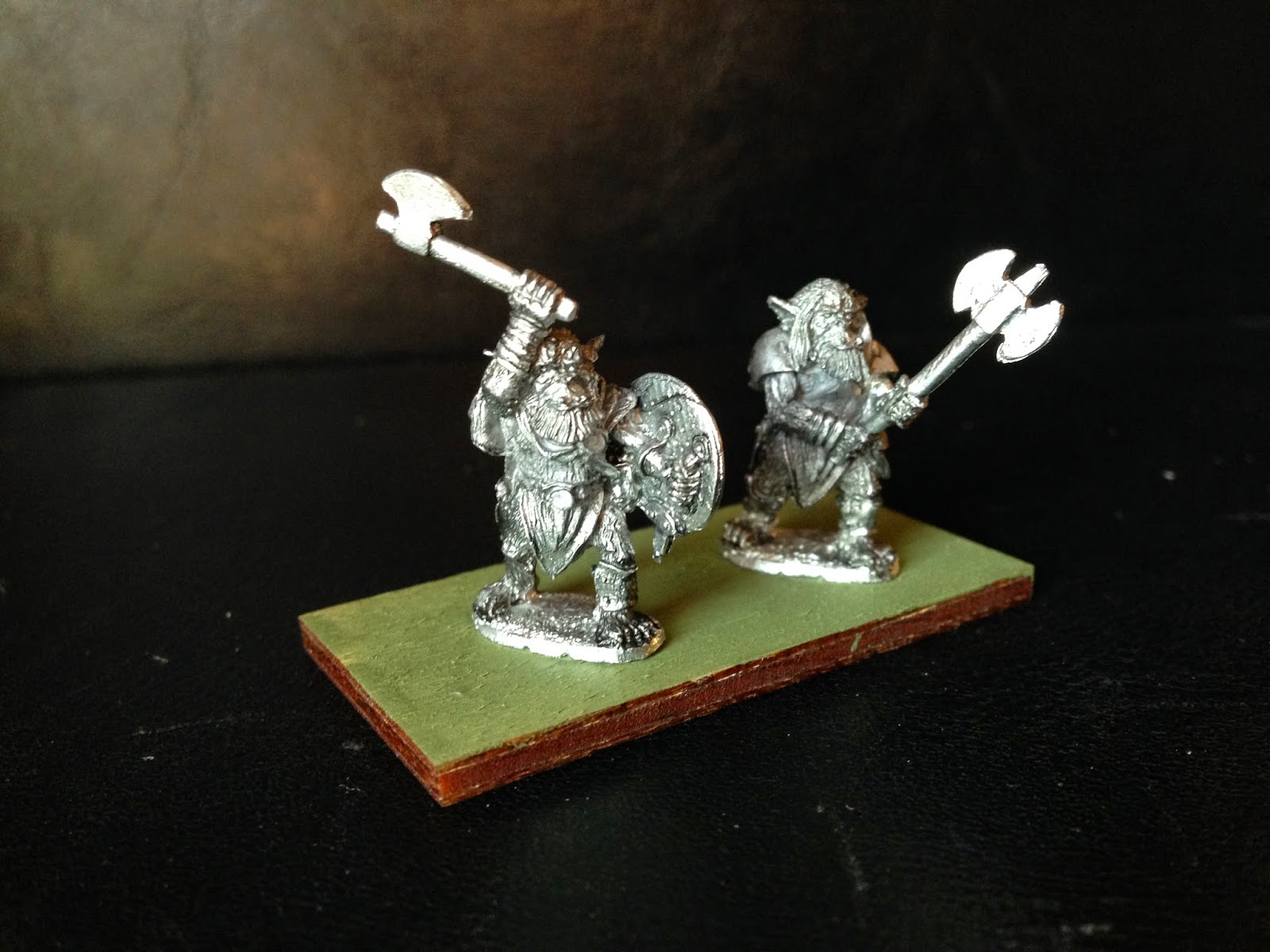 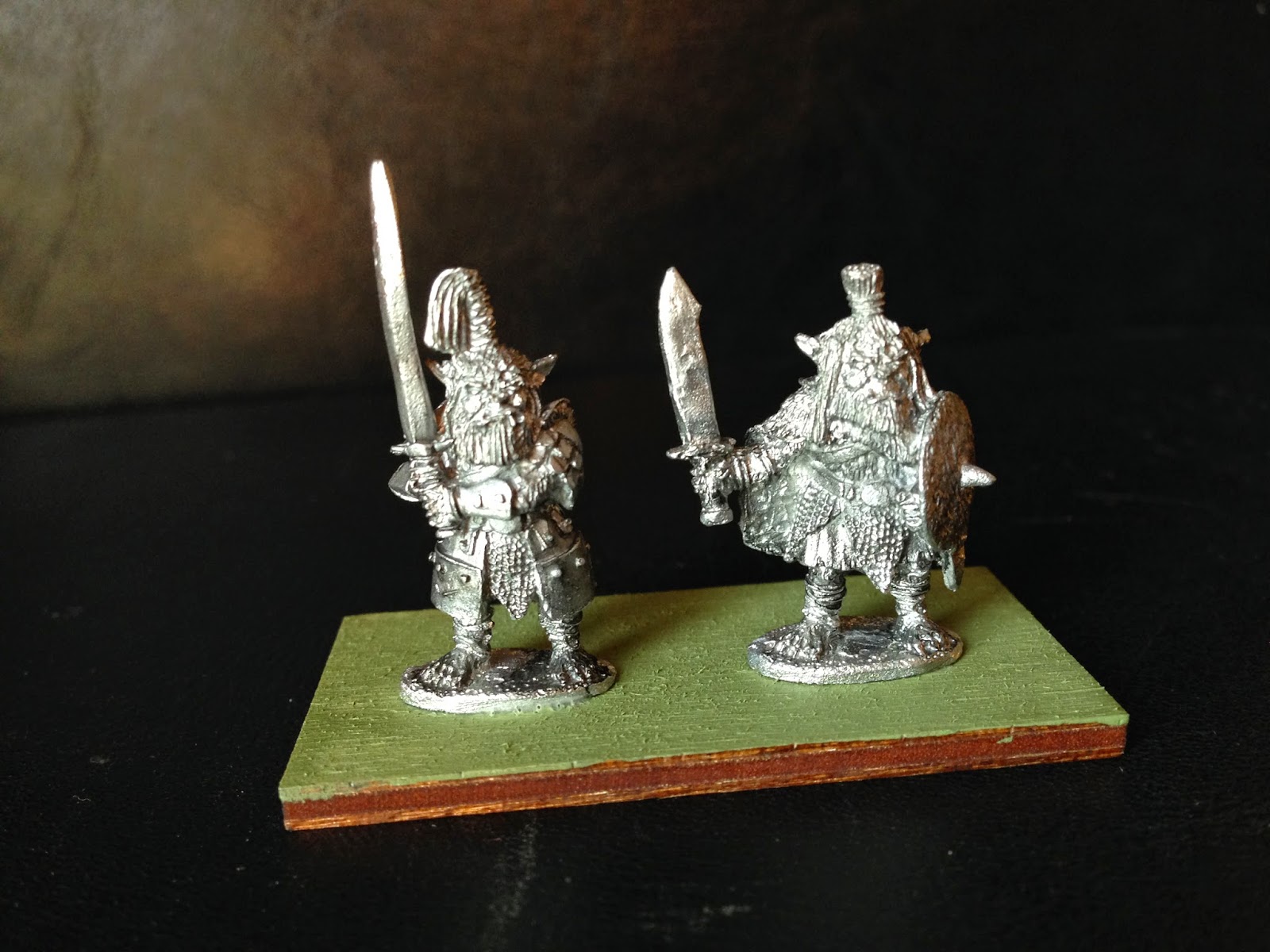 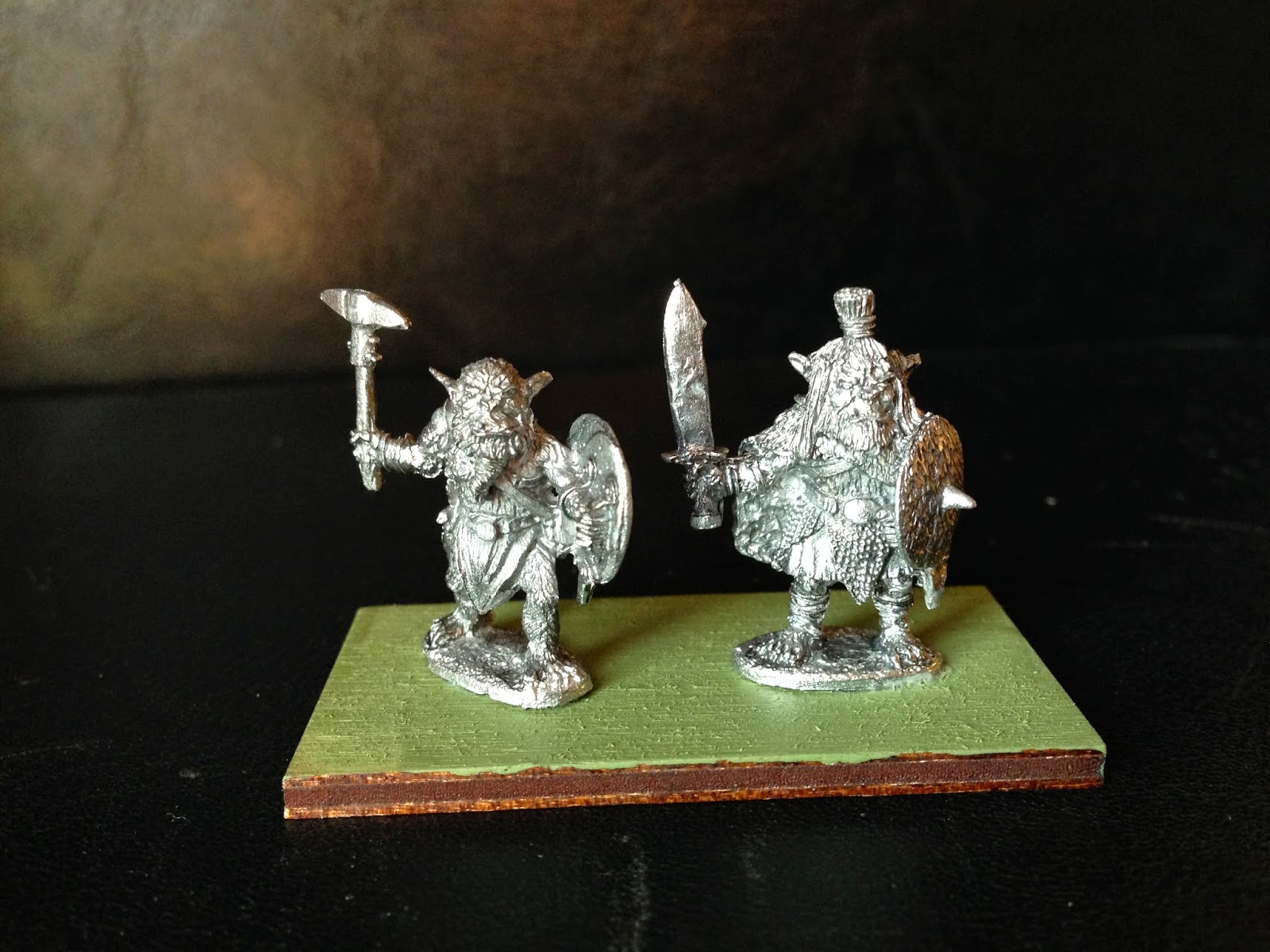 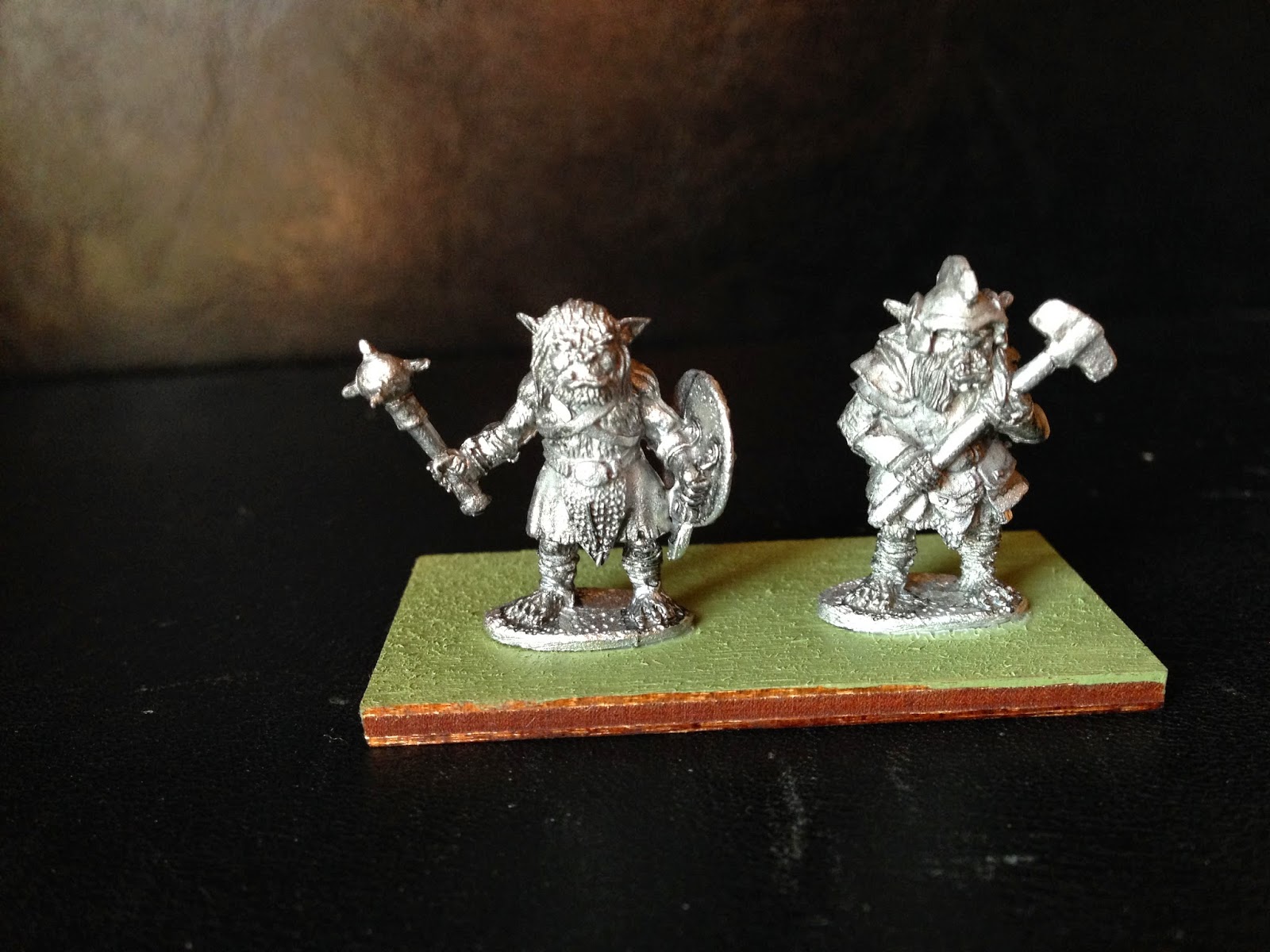 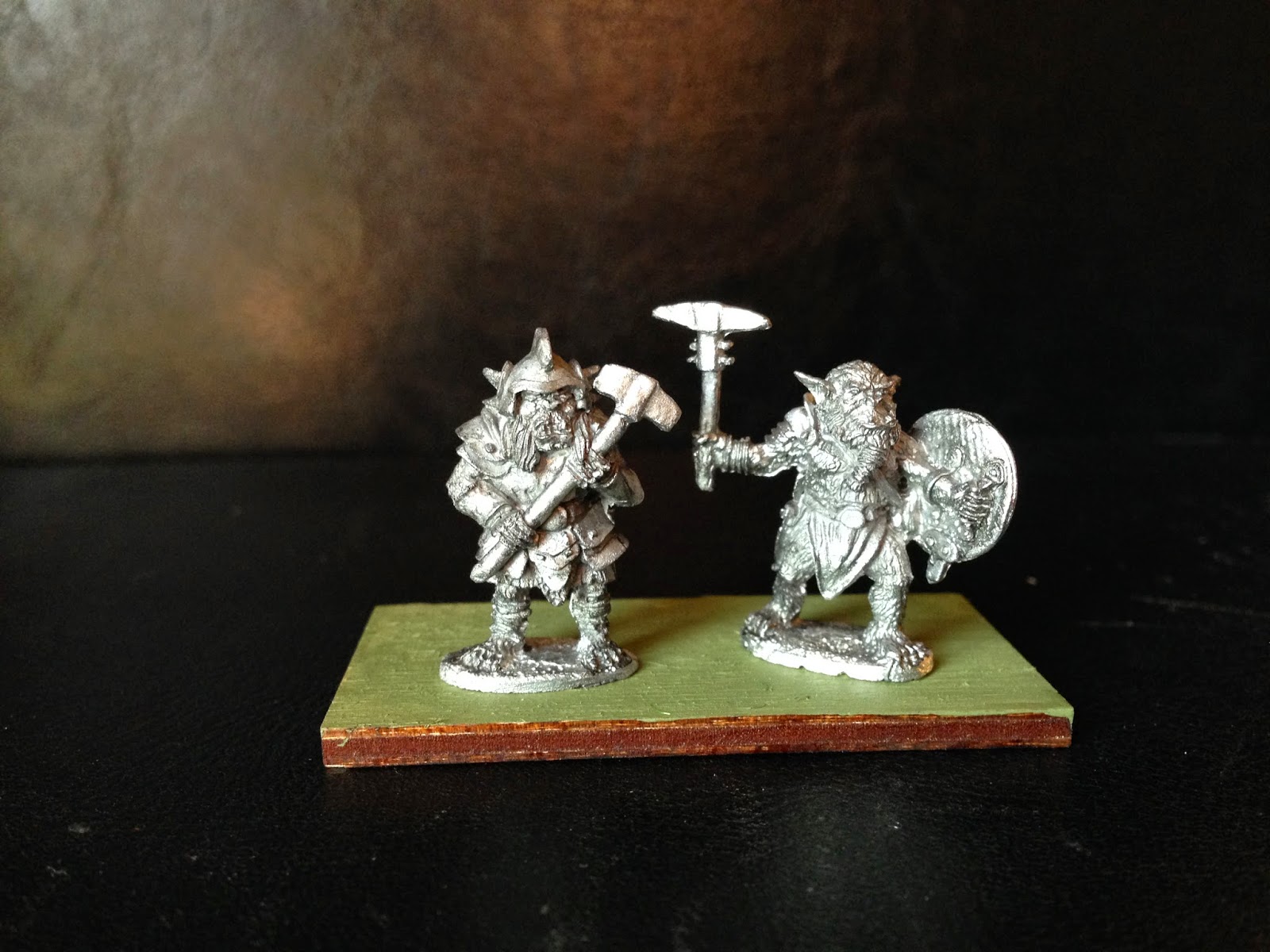 A week ago I was inspired to design a new board game. It's a game of fantasy armies, battles, conquest, and heroic quests. I've been working on the rules all week and am really excited about the results. I think that its going to be a lot of fun. The working title is either:     Epic!  or Warquest. (Feedback?)

The next step in the design process is to create a prototype and playtest it. This is a critical part of the process as it tests all of the assumptions and mechanics, and allows me to tweak the game until its finished.

Since this is such an important task, I want to make sure that it's fun and looks great. To that end I have been ordering miniature fantasy armies online to use as pieces. When determining which miniatures to use, scale is always a question. There are many great 28mm fantasy figures out there, but they may be too large to work as board game pieces. 15mm are a little small and the detail can be hard to see much less paint well. I settled on 20mm, and started looking. In my search I found a very cool line of 20mm miniatures called Splintered Light. They have Dwarves, Goblins, Beastmen (Satyrs, Fawns, Minotaurs, etc.), Bugbears, and even a few Ogres.

They can be found here:

I placed my order and received the figures very quickly.

This morning I painted up a stand of Bugbear Crossbowmen. 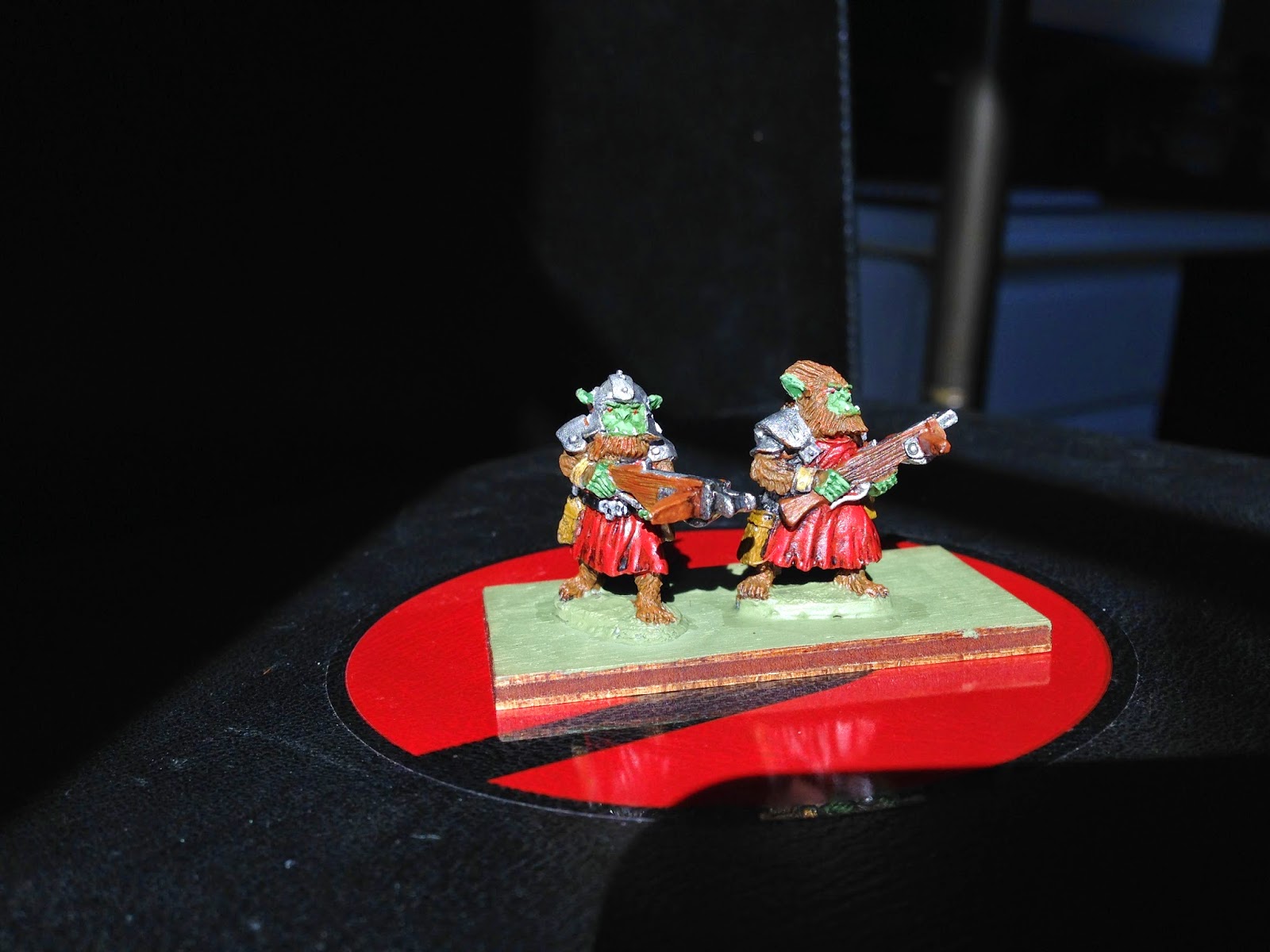 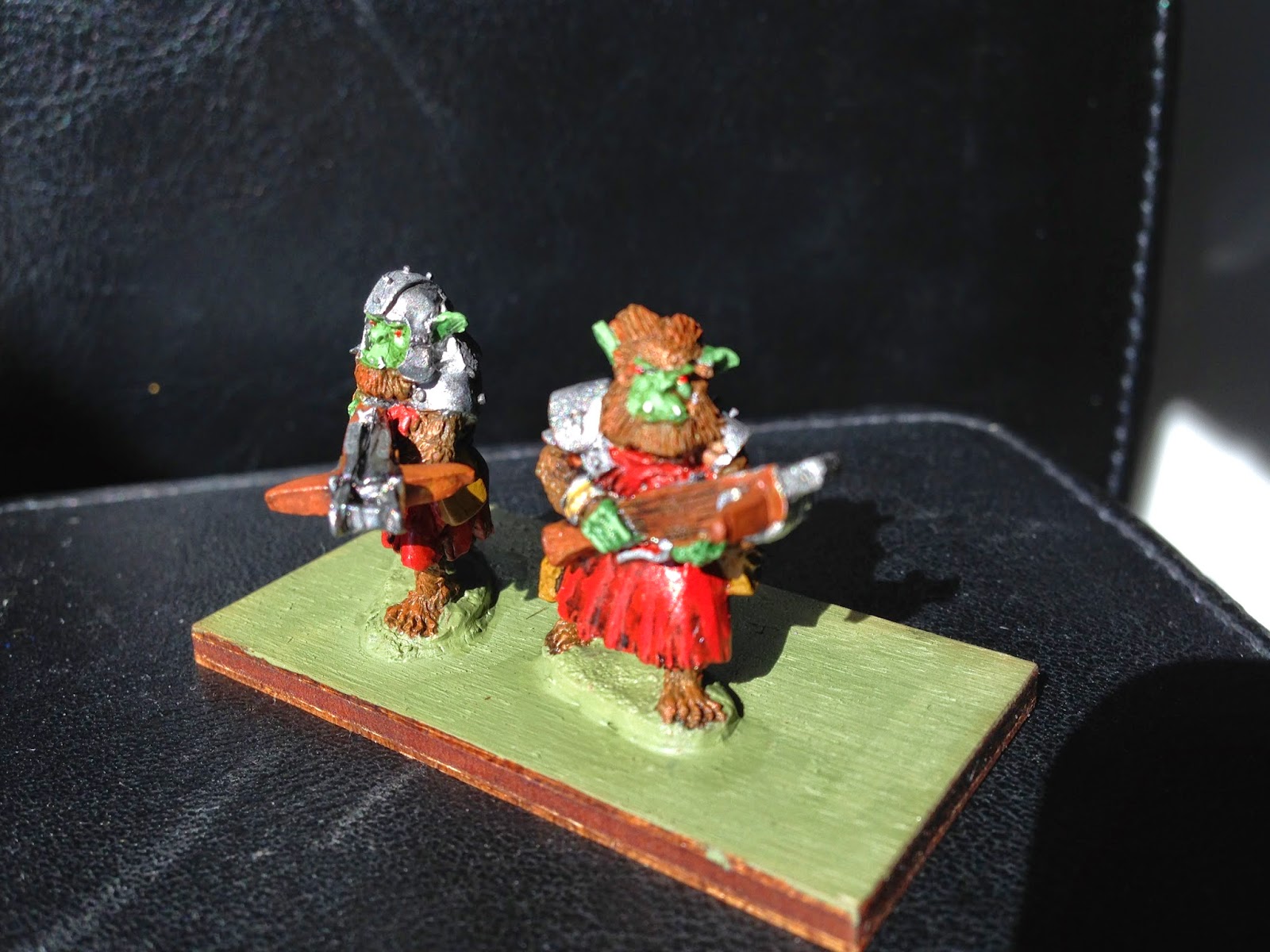 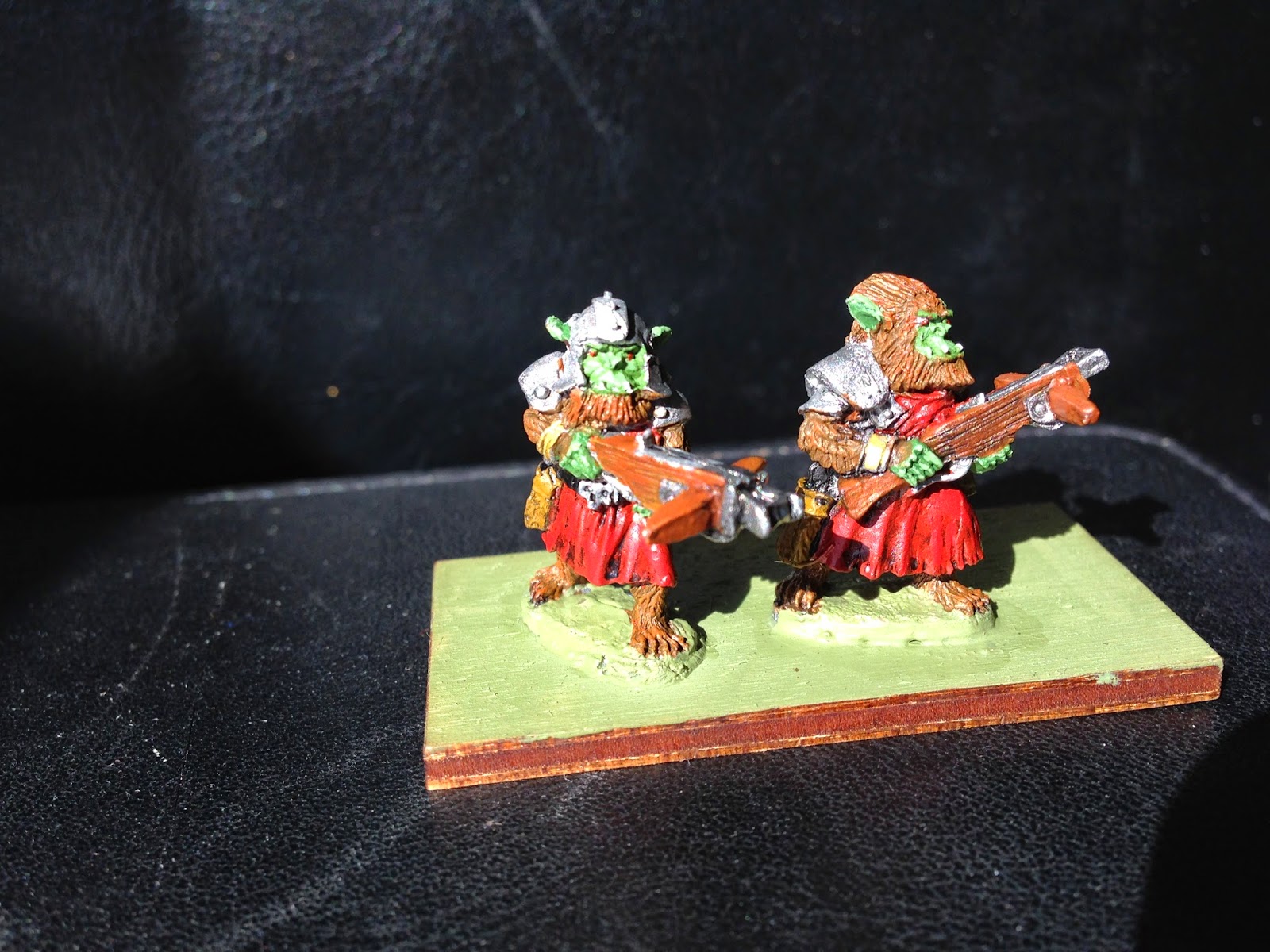 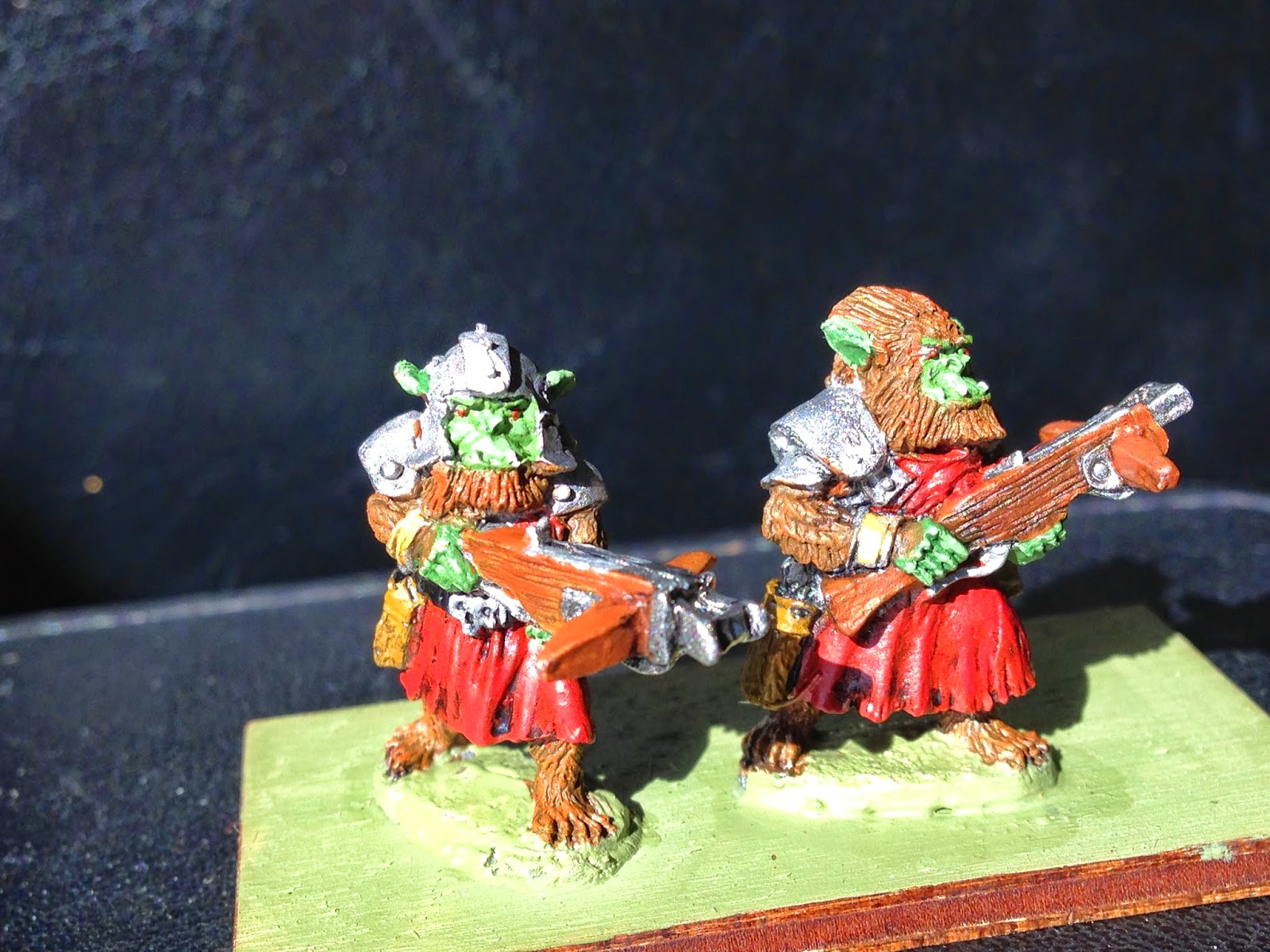 I really like the figures. The entire line was sculpted by Bob Olley, who is widely known in the miniatures community for his unique style. He is a genius in giving his sculpts character and individuality.

I can't wait to get to work on the rest of these great figures.

I usually post gaming and miniatures projects here, but since this project has replaced those for most of the Summer, and since it was a project in many of the same ways that creating miniature armies are, I figured that it belonged on this blog.

Two Summers ago, we built a new patio to replace the truly crappy one that we lived with since buying our home in 2000. The new patio was great, but needed new furniture, so we invested in some Italian slate tables: An 8 foot long dining table, a small round coffee table, and a rectangular lounge table (you know, to put our drinks on when we were lounging).

The first two weathered our rather harsh climate beautifully and are still like new. The lounge table however wasn't made as well, and moisture permeated the crappy plywood understructure, warped it, and the entire table essentially fell apart.

Well, I liked that table and finding a replacement proved difficult, so I gritted my teeth and determined that I would tear the old table apart, rescue the slate and the legs, and build a new one!
The fact that I've never built anything in my life didn't give me a moment's pause...though it should have.

My first mission was to tear the wood off of the undercarriage and remove the slate pieces. This proved to be the first major obstacle. The liquid nails that the manufacturer used to attach the slate to the plywood proved more resilient than the wood. I was able to break the slate pieces away from each other and tear them from the wood, but I was left with big, hard gobs of glue on the bottom of the slate. Off to the internet I went to learn how to remove it.

I learned that alcohol is a good solvent for removing glues of all kinds. Aha! A new Summer project was just added to the list: Clean out the liquor cabinet. We had dozens of crusty, half used bottles in there from parties dozens of years ago, and now I could put them to good use. As my lovely wife Hectored me that 'that is never going to work', I poured the contents of bottle after bottle into a giant bucket, and then gently slid the slate pieces into the bucket.

Every few days I would go out to the sandbox at the side of the house to check on the progress. I would scrape and scrape at the stubborn glue, and little by little it came off one chunk at a time. Mostly due to my wife's incredulity I was as stubborn as the glue. I WAS going to get those slate pieces clean. After a few weeks and innumerable trips to the sandbox, they finally were...though during one particularly 'Hulk Smash' episode I cracked one of the pieces...

Now I had the clean slate pieces (minus one), and was ready to go to the store to buy the components that I would need. But what were they? I'm not very handy, and I had no real idea what I needed to buy other than 'wood' and 'glue'...so, off to the internet again. After taking some measurements and doing a crude little drawing, I went online and started learning. It really is amazing what you can learn via articles and videos. The process was a long one, and took many weeks, and many videos, and many trips to various hardware stores. Here is the list of components that I ended up acquiring:
* Plywood board for the base of the table (cut to size at Home Depot)
* 2 tubes of liquid nails (one to glue the undercarriage to the plywood, and one to glue the slate pieces to the top of the plywood)
* 8 screws of the exact size to fit the holes that would screw the undercarriage to the plywood (glue and screw is what I learned on my internet teacher...seemed like good advice).
* grout spacers so that the slate pieces would be spaced exactly right during gluing.
* a replacement piece of slate tile for the one I cracked during de-glu-ifying. Luckily I found one at a tile store that was exactly the same size and even color. Wow! Luckily the one I cracked was one of the small, square ones that goes in the middle (see below), and not one of the larger, irregular pieces.
* One bag of dark gray grout
* One bottle of grout mix (by using this instead of water, my grout would become 'Super-Grout', and would handle the outdoor environment on my patio much better.
* One bottle of grout sealant (Now it was Super-Super-Grout!)
* Wood for the top pieces of the table. After some...wait for it...online research, I learned about a cool wood that has many of the properties of Teak, but was prettier, and easier to work with. It's called Ipe, and apparently its native to Central and South America. It seemed like the perfect wood for a piece of outdoor furniture that I wanted to last for more than one season. I ordered the right amount from an online wood dealer...yes, they exist. After it was delivered to my door, I took them next door to Pat's House. Pat's House may look like an average, every-day suburban single family dwelling, but it's really a secret cache of every tool known to man, owned and operated by an engineer who looks at home projects like Scientologists look at confused college students. Pat not only helped me cut the pieces to the exact right size, but also sheered off pieces for side laminate (something I hadn't thought of), gave me clamps to hold the wood tightly together while the wood glue dried (something I hadn't thought of), came over and power-sanded the edges so that the laminate would fit flush (something...you get the idea), and came over again once everything had dried and routed the laminate edges so that they were perfectly flush with the table (yep).
* Wood Glue... you know, for the wood.
* Two grades of sandpaper and a holder to sand the wood smooth and even.
* One container of Danish Oil to put a deep, rich, natural color into the wood, and to protect it.
* One bag of lint-free rags to apply the Danish Oil in multiple coats without leaving linty pieces of lint in the finish.

Here, finally, is the finished piece in its natural habitat drying and waiting for the first frosty cold bottle of beer to be placed on it tonight: 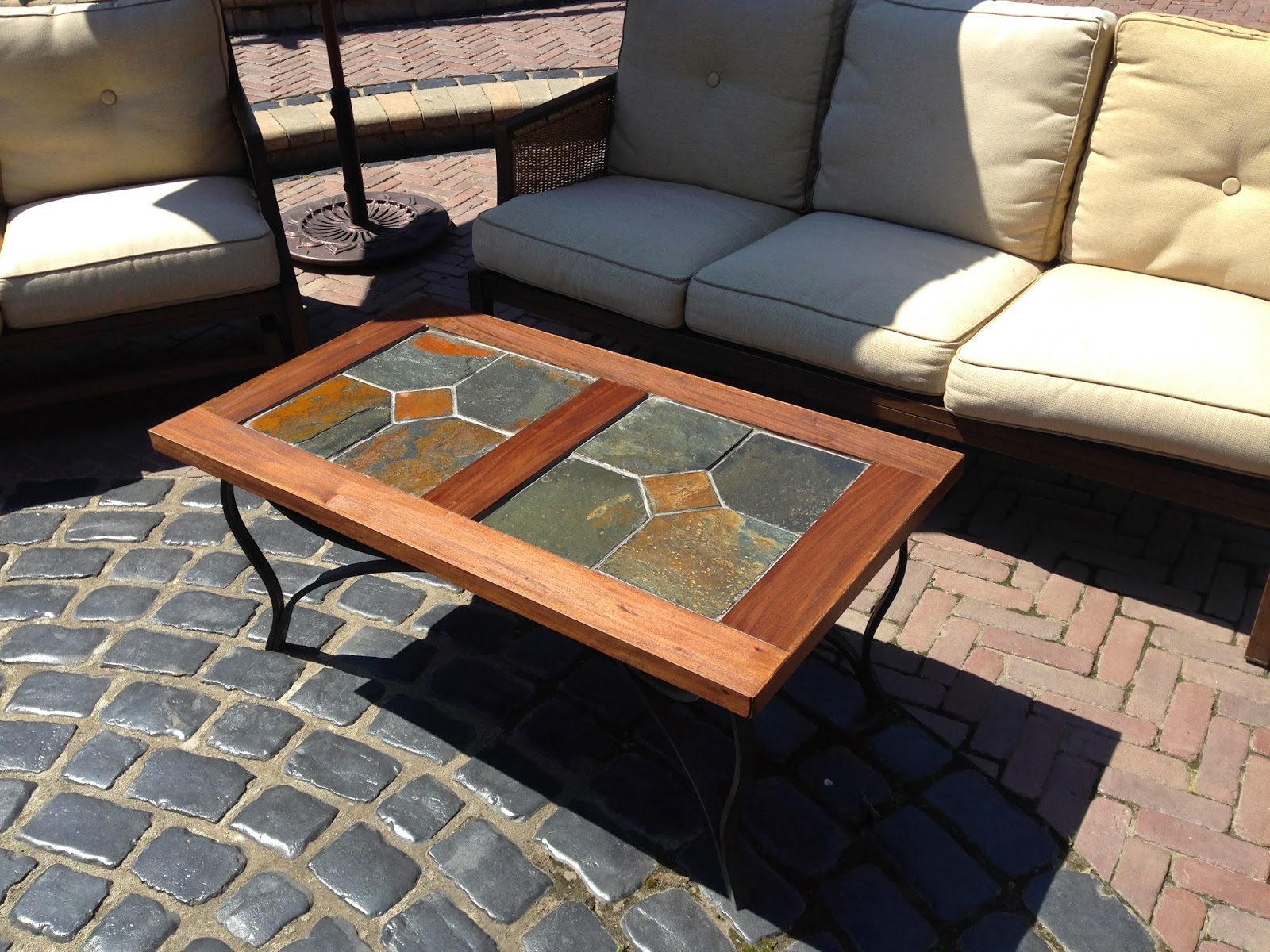 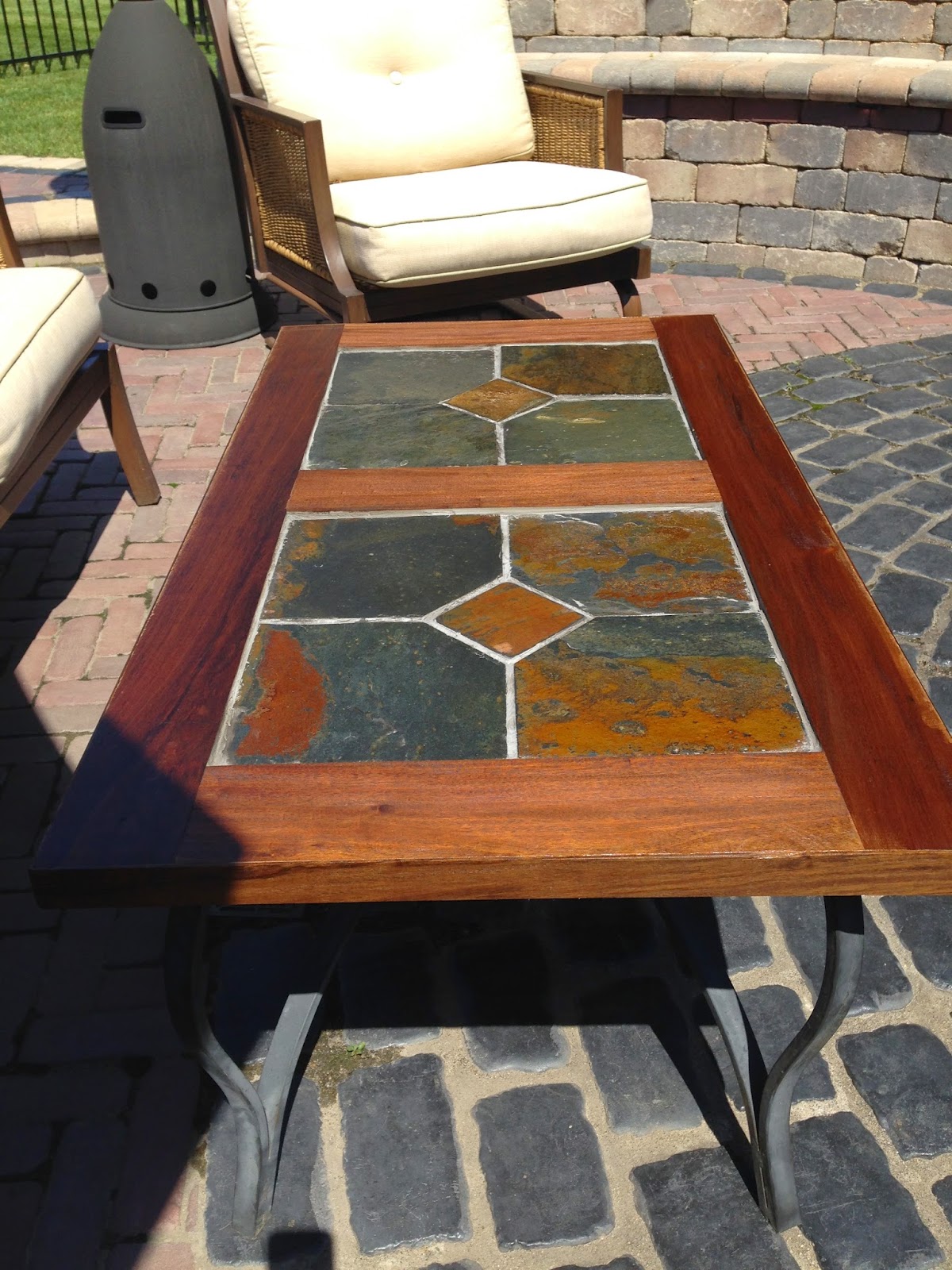 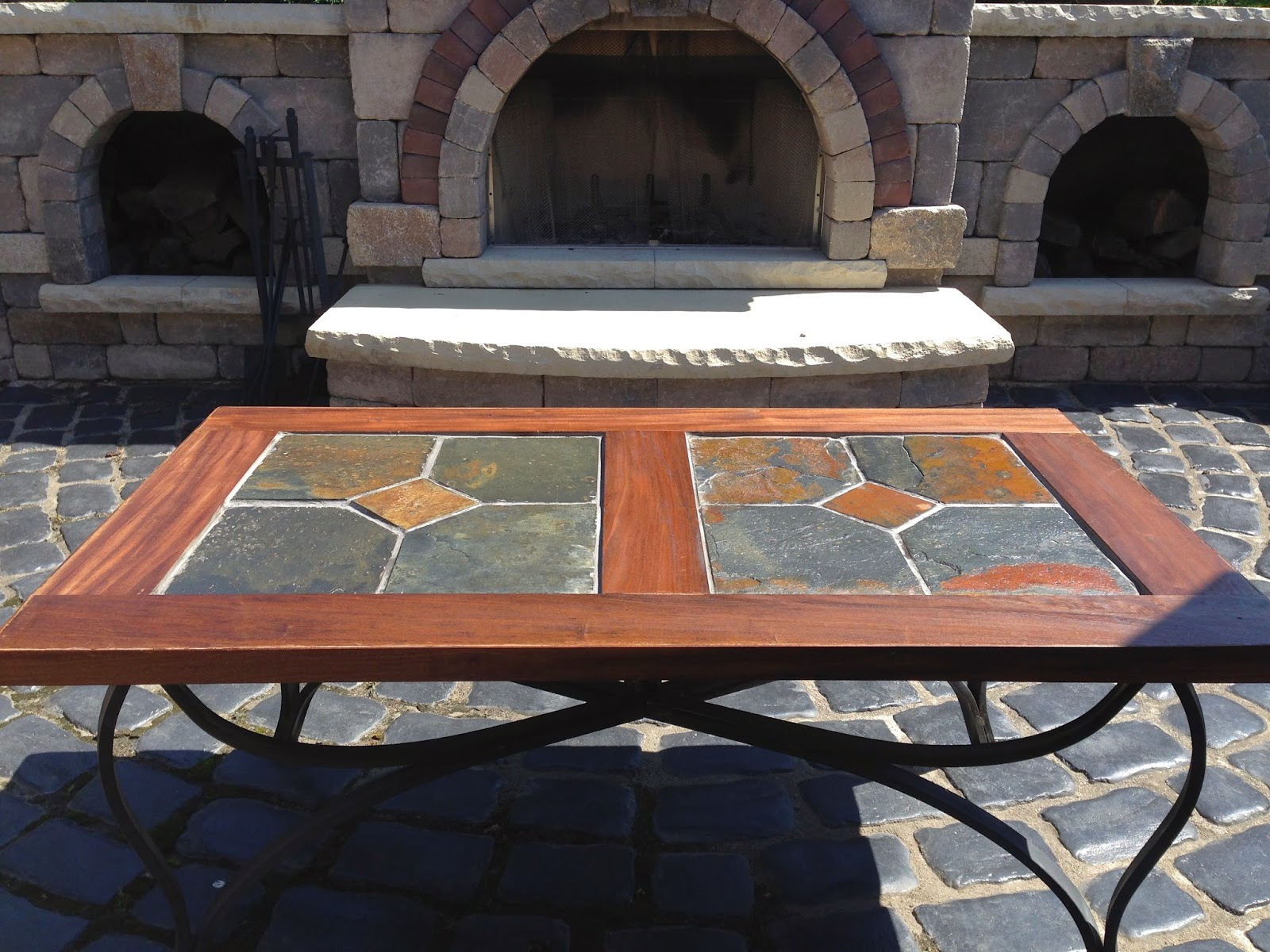 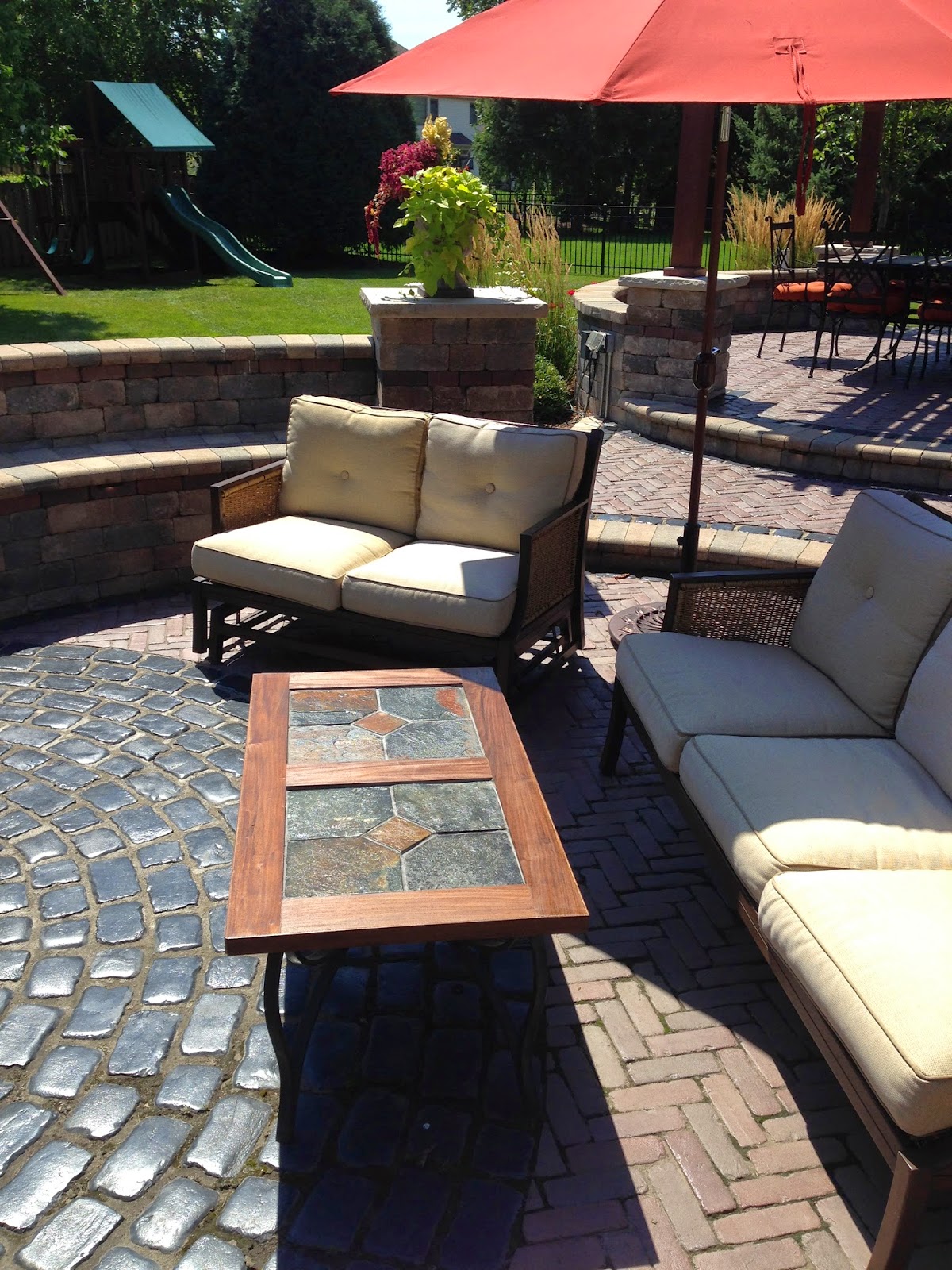 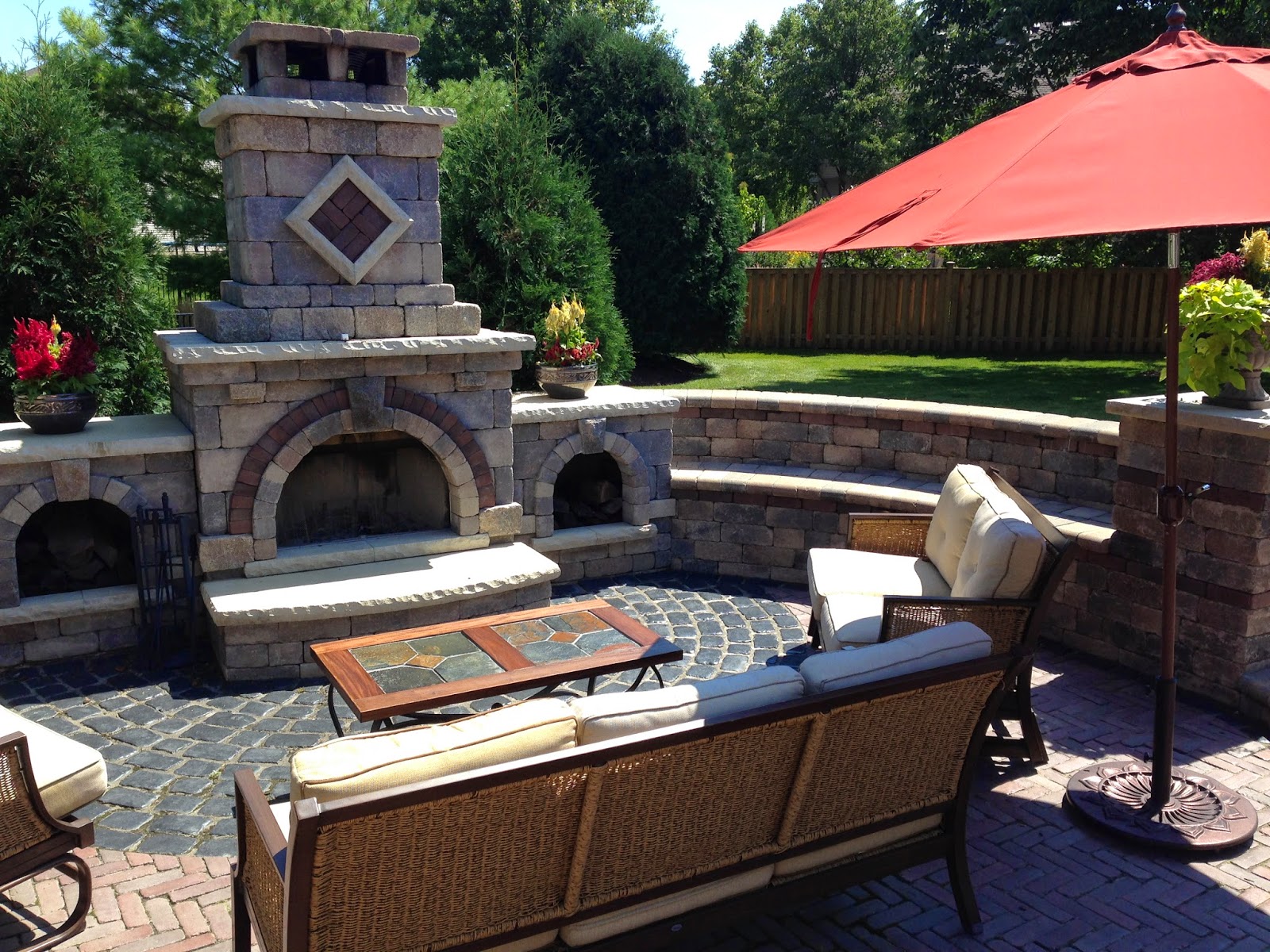