The short video of Pickett's Charge:

With the 150th anniversary of the great battle coming up, I started to plan our trip about a year ago.  I was able to find the website for the big re-enactment and book tickets, including seats in the grandstand.

We drove from Chicago to Gettysburg on Friday, July 5 and spent the next day walking the battlefield.  I wanted the kids to have the authentic experience before the re-enactment, which was held on a farm northeast of town instead of on the actual battlefield.

The town itself was still very crowded for the festivities on Saturday, and the battlefield roads were pretty full of cars as well.  I was able to find a parking spot somewhat out of the way, just north and a little east of Little Round Top.  We walked to Devil's Den and climbed the back side. 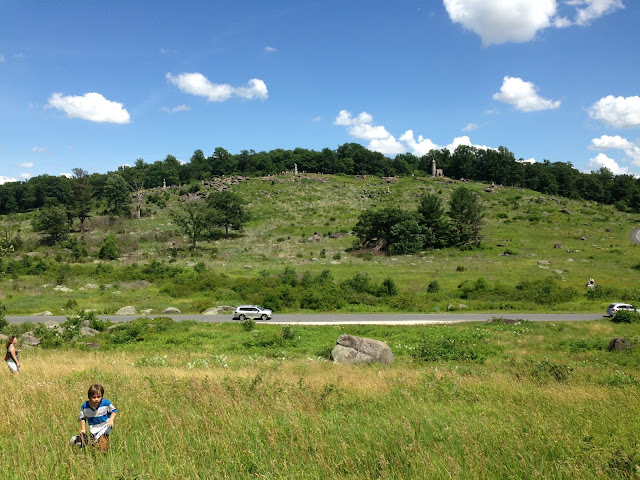 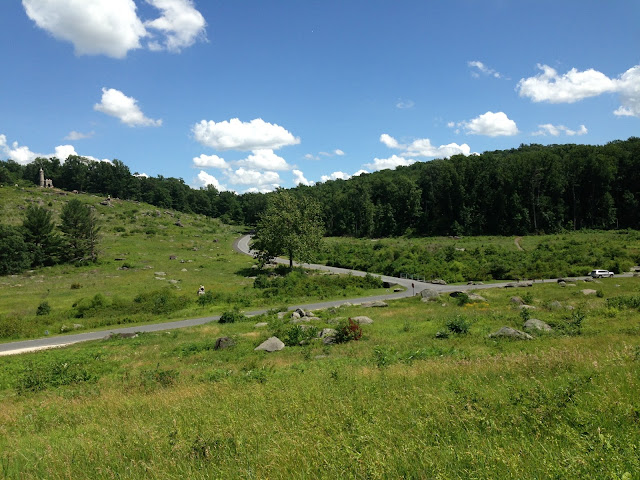 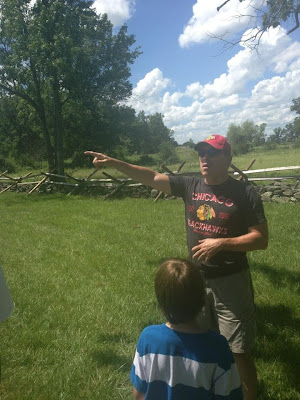 We then went from there up Big Round Top and then over to the south side of Little Round Top (where the 20th Maine fought. 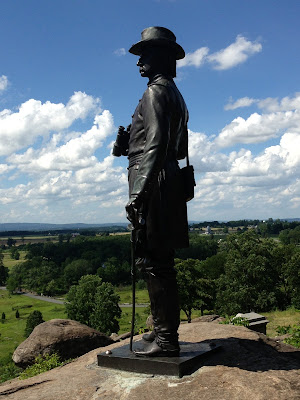 And finally to the front (west) face of Little Round Top for views of the battlefield.

It was a crazy hot day, and my poor transparent children were pretty flushed when we reached the car again.


The next day was equally hot, but worth it.
The morning included a cavalry action that featured approximately 100 horsemen. 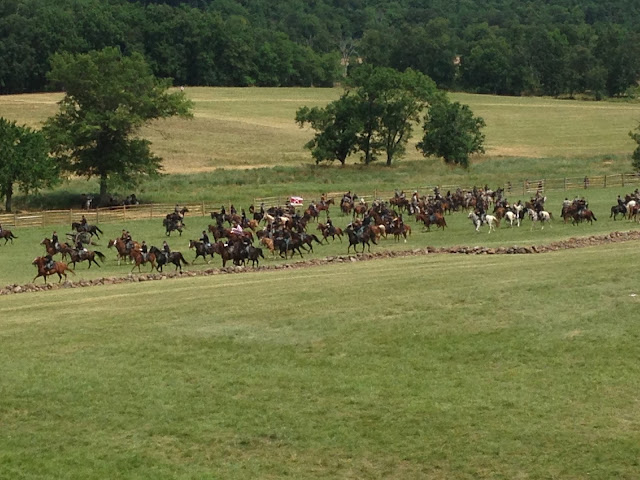 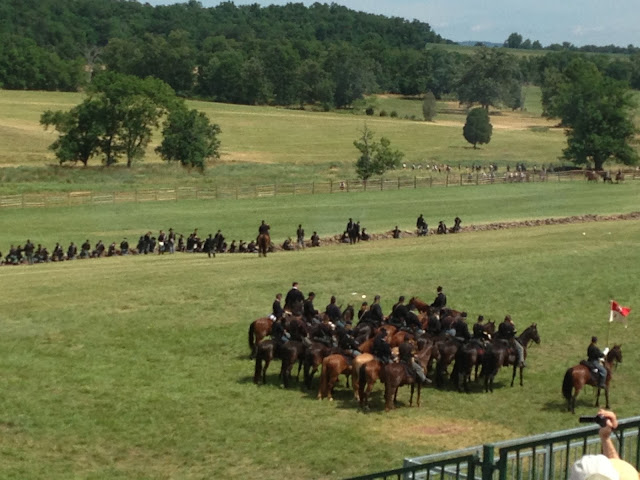 The afternoon's event was a recreation of Pickett's Charge. Almost 100 cannon banged away at each other for almost 30 minutes before a few thousand Confederate re-enactors formed up and advanced on the Union line.  The firing intensified and the Confederate losses piled up.  I actually got a bit choked up as the tide ebbed and they fell back.  It was a pretty incredible insight into the event itself. 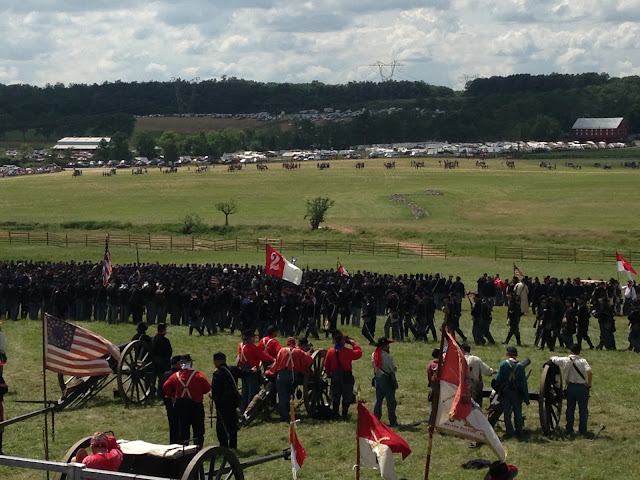 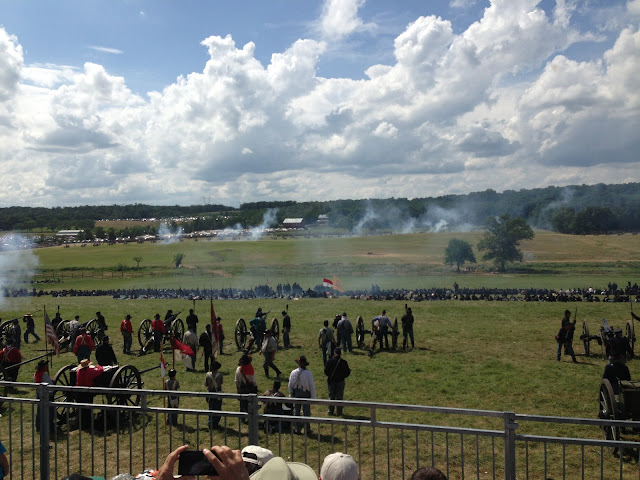 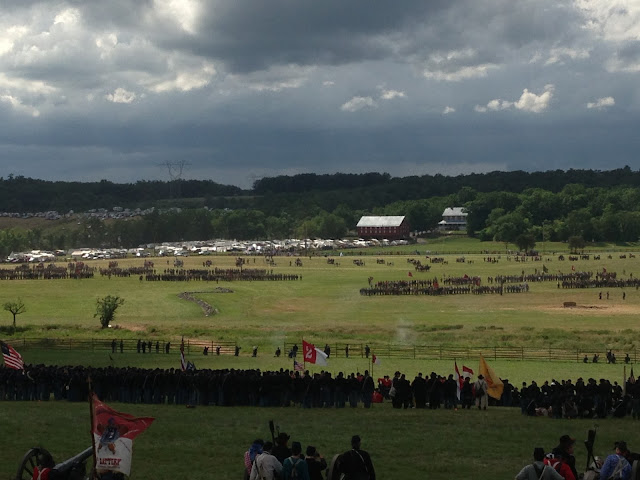 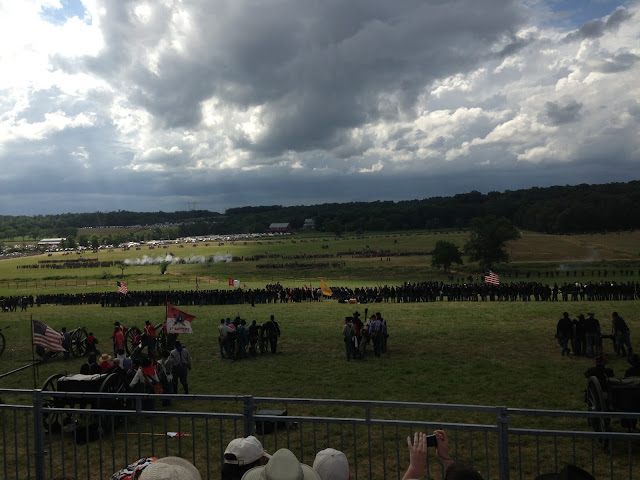 Academy Games has a new game out called 1775: Rebellion.  I pre-ordered it, and then had an idea:
What if I could get Scott MacPhee to paint up some 28 mm AWI miniatures from Perry and Foundry to use instead of the wooden cubes?

That would be cool.

But they wouldn't fit on the regular board.  Maybe I could make a big version of the board...you know, 6' long.  The figures would fit on THAT!

So I contacted Uwe at Academy Games and asked if I could get the file for the game board.
He was very obliging, so I sent the file to my graphic designer, Jim Provenzale at Fast Forward Design in Downers Grove.  He was able to make my monster 6' board.

So, the mad idea became a reality, and here is the result: 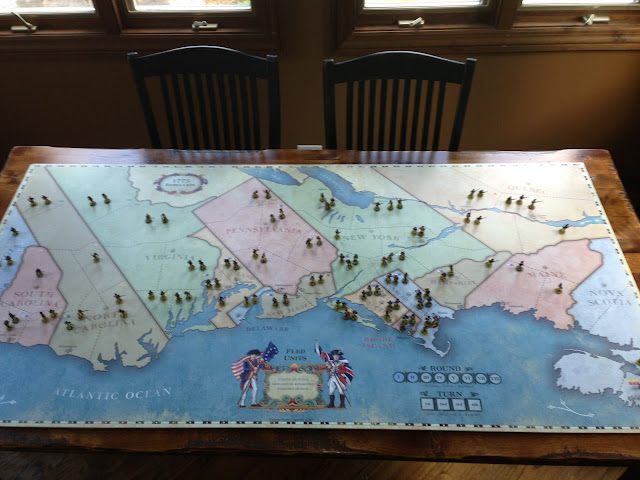 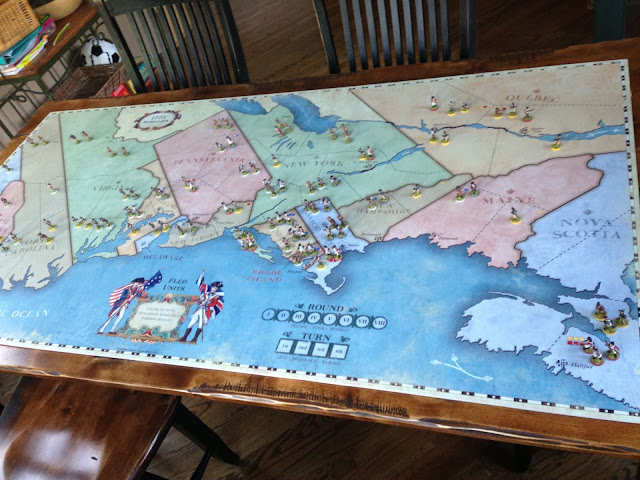 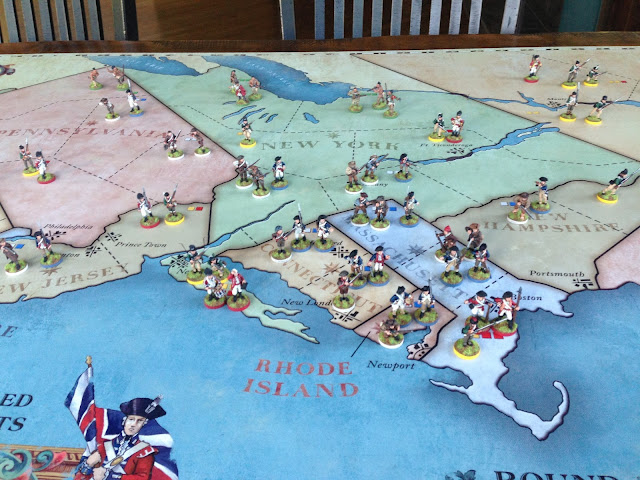 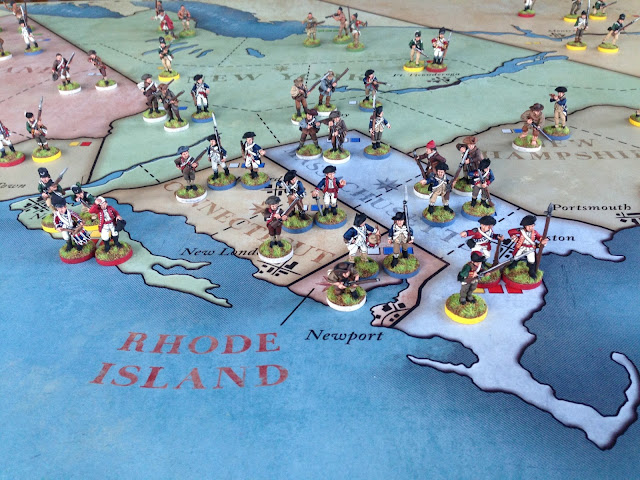 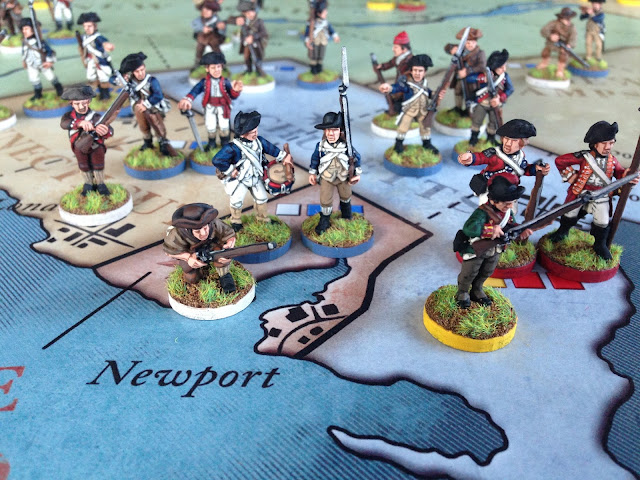 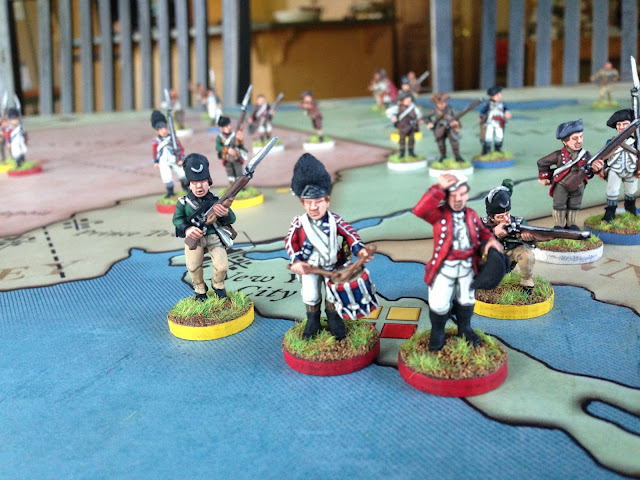 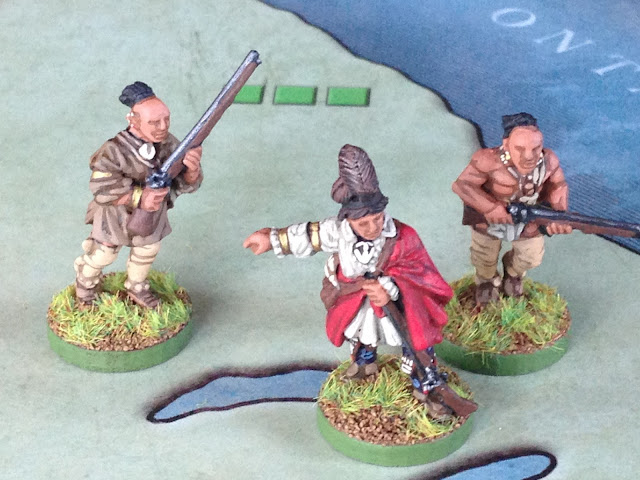 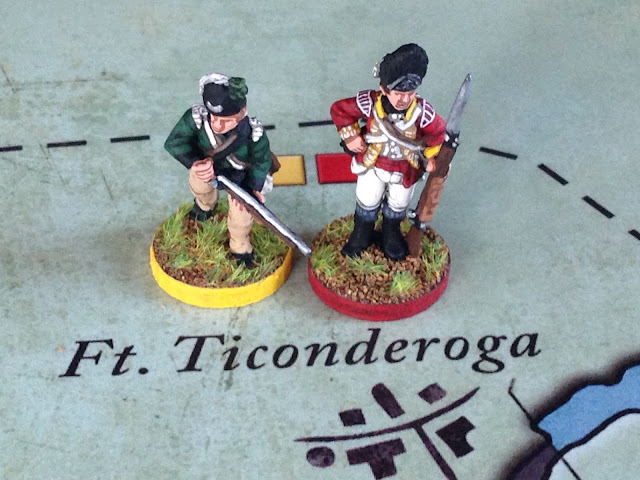 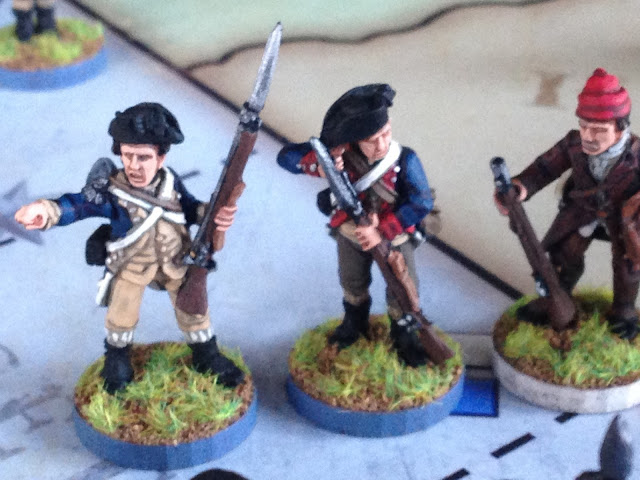 Thanks to all those involved in making this happen.

And to those who want to play,
I'll be bringing the game to Gen Con.