This year I finally decided to attend Historicon for the first time. I've been to Fall In once before, and to many Little Wars conventions, but somehow I have never found my way out to The Big One.
Well, this year I was determined to go and if I was going I wanted to put on a big game. Since my Austrian, Spanish, and Portuguese armies are fresh off the painting table, I now have the units to play pretty much any Napoleonic battle that was ever fought. After a little thought, I decided on Leipzig. It was on a grand scale and included armies from France, her German allies, Poland, Italy, Austria, Prussia, Russia, and even Sweden. In order to do the battle, I would have to make each unit the equivalent of a division. Even so, there were going to be just a ton of units on the table...and the table would need to be extra large (8' x 10') (compared to the one in my basement, which is 6' x 9').

Here are the orders of battle that I created and the units associated with them all laid out on my table ready to be packed for the show. 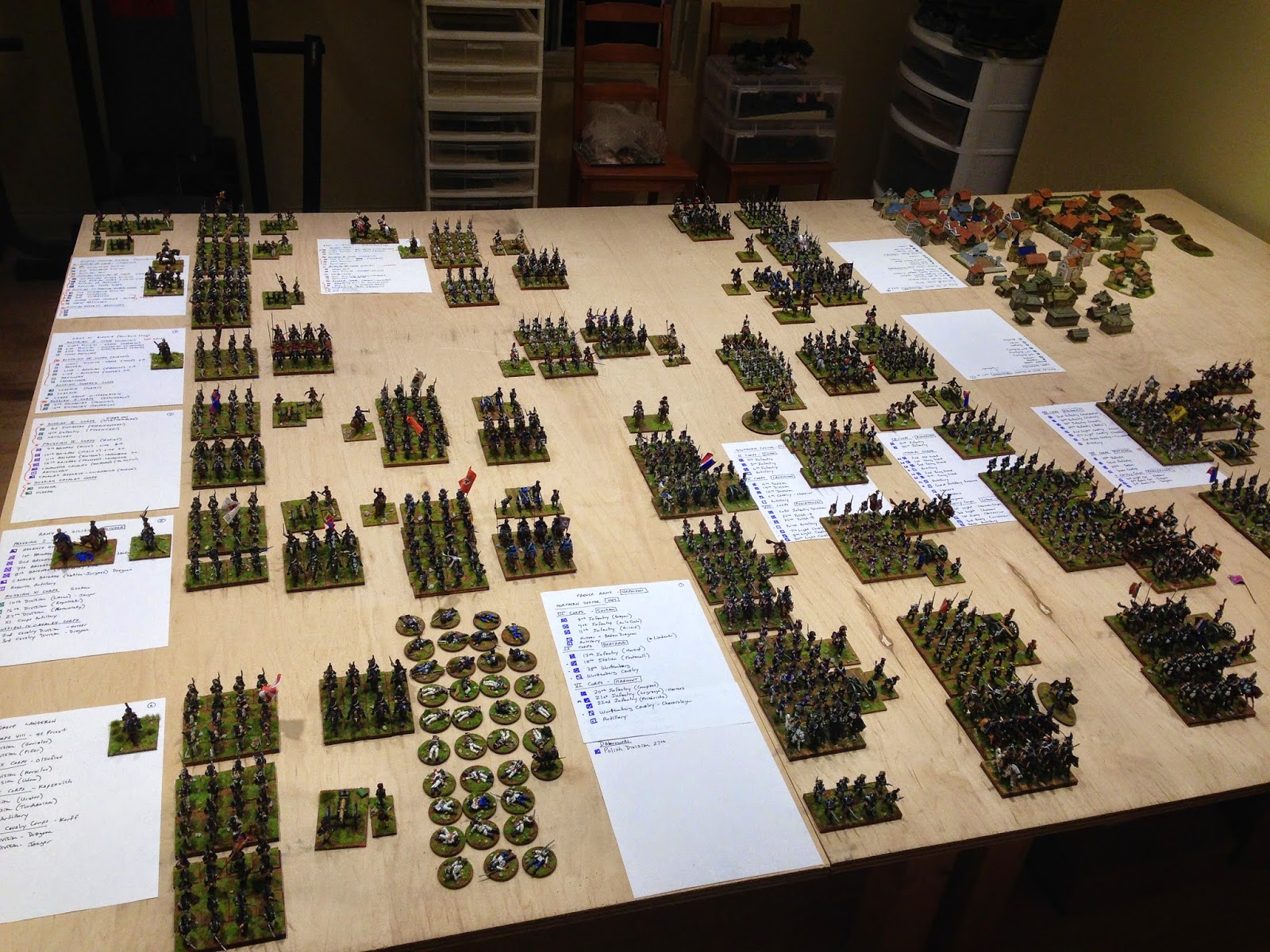 I scheduled the event to start at 12:00 on Saturday, and estimated that it would take 5 hours to play. I would divide each side into a Northern Front Commander (Blucher/ Ney) and a Southern Front Commander (Schwarzenberg/ Murat). There were eight players, so this worked out perfectly with teams of two each taking control of a command.

I arrived in Fredericksburg on Thursday evening after an all-day drive from Chicago. Friday I scouted the show and browsed the vendor hall.
Saturday morning I woke early and arrived to start setting up at 7:30 am. I needed almost every minute of the time to be ready for the noon start.

Here is the town of Leipzig represented by a Medieval village from Total Battle Miniatures, but painted to fit into the Napoleonic time period. I really love their 6mm buildings as they make great villages on my battlefields. 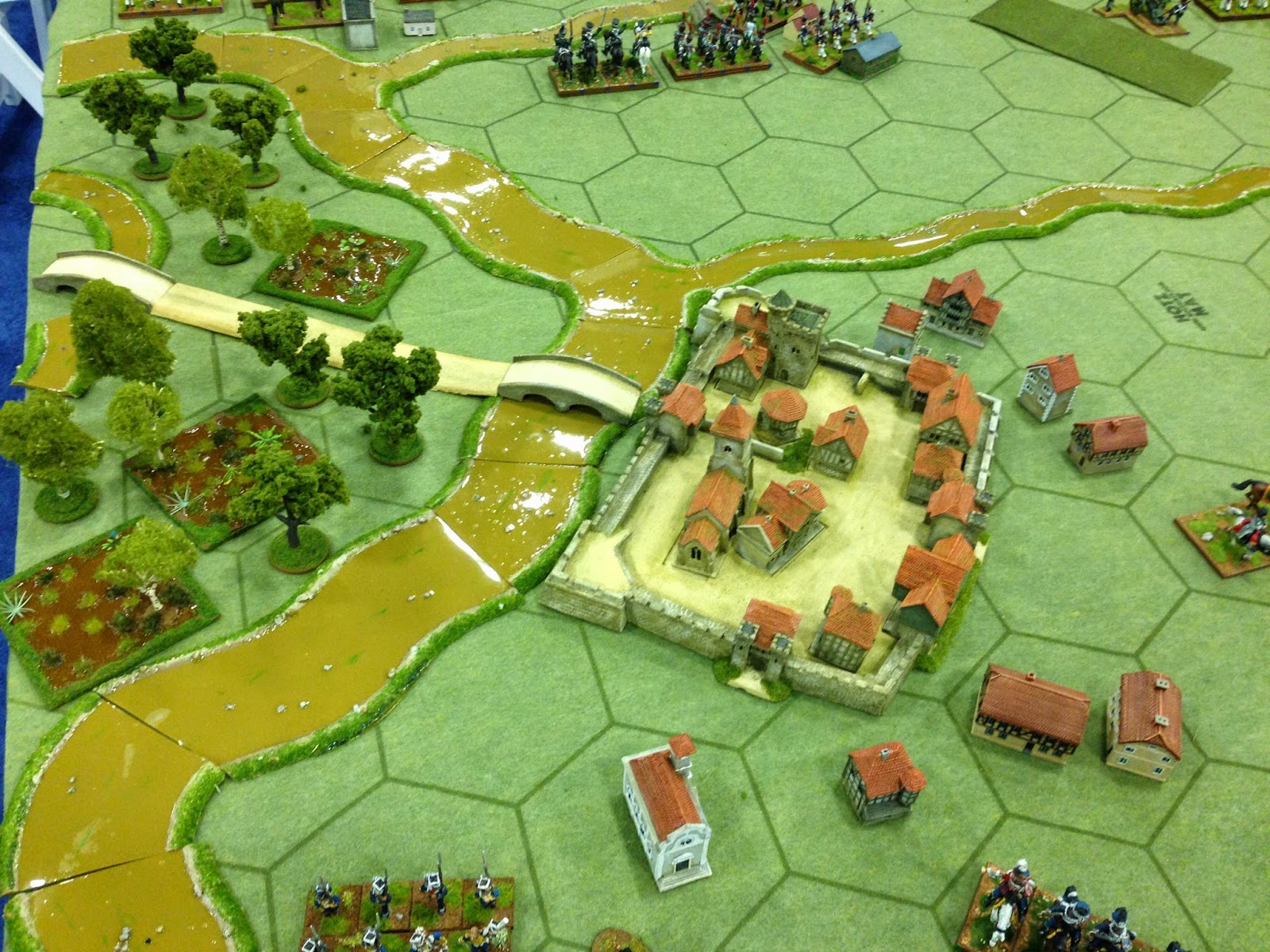 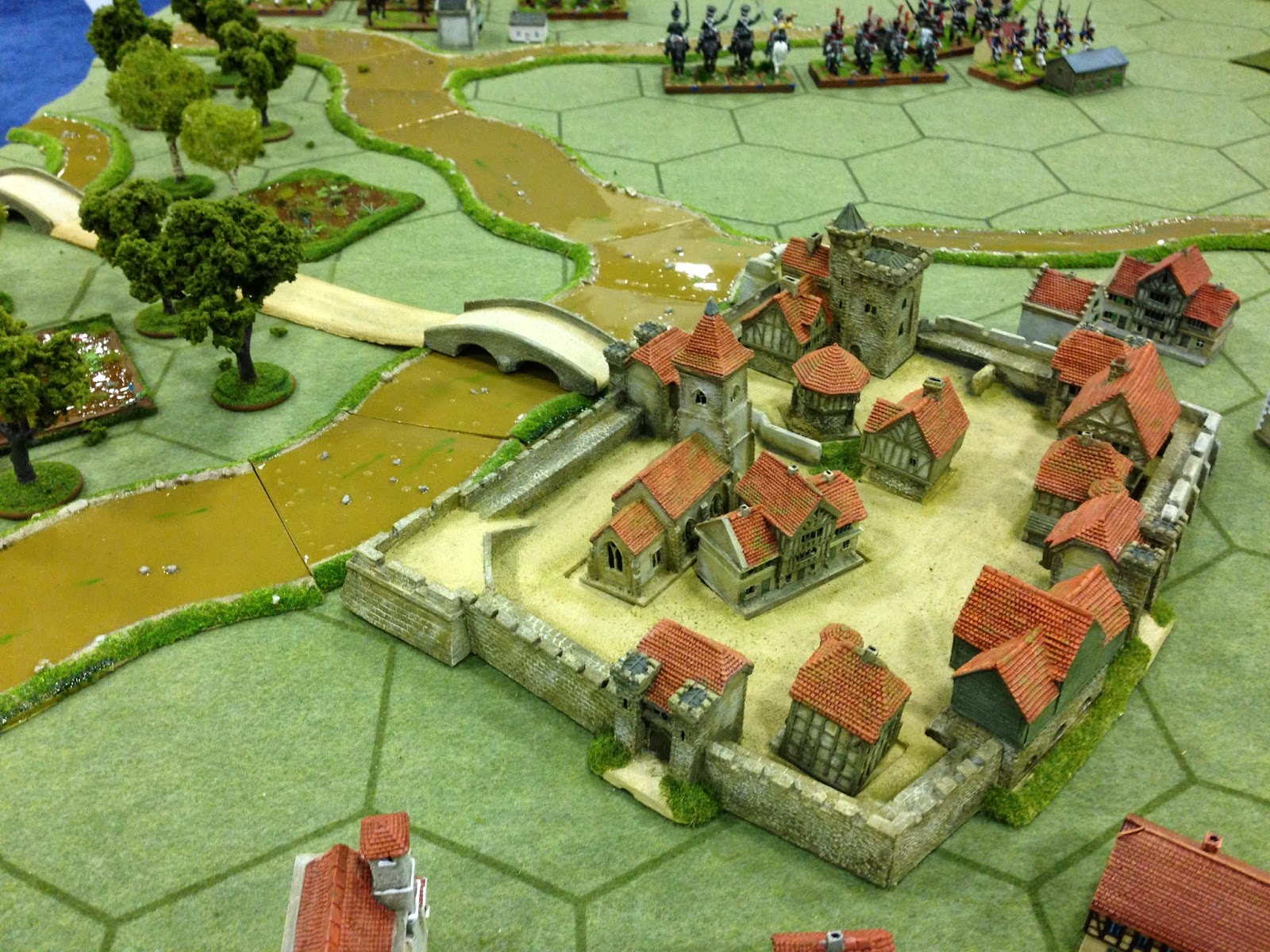 I know that the buildings sometimes look out of place with 28mm figures, but when each base equals something like 5,000 men, I really can't use buildings that are any larger and have it work. Here is the French Imperial Guard in the French center (Southern Front). 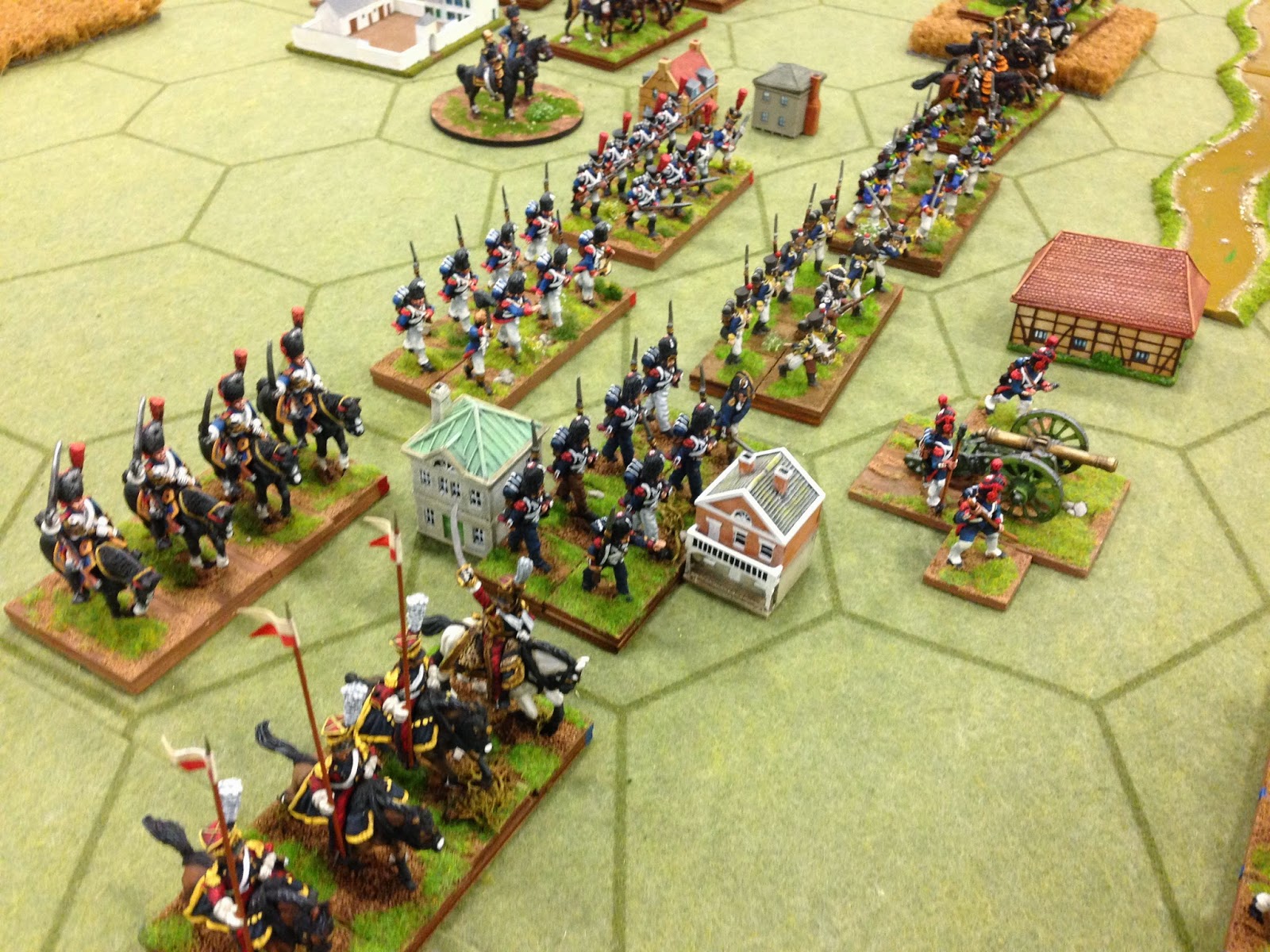 Here is a view from the Allied Reserve (note the Russian Cuirassier and artillery heading north to support the main line. 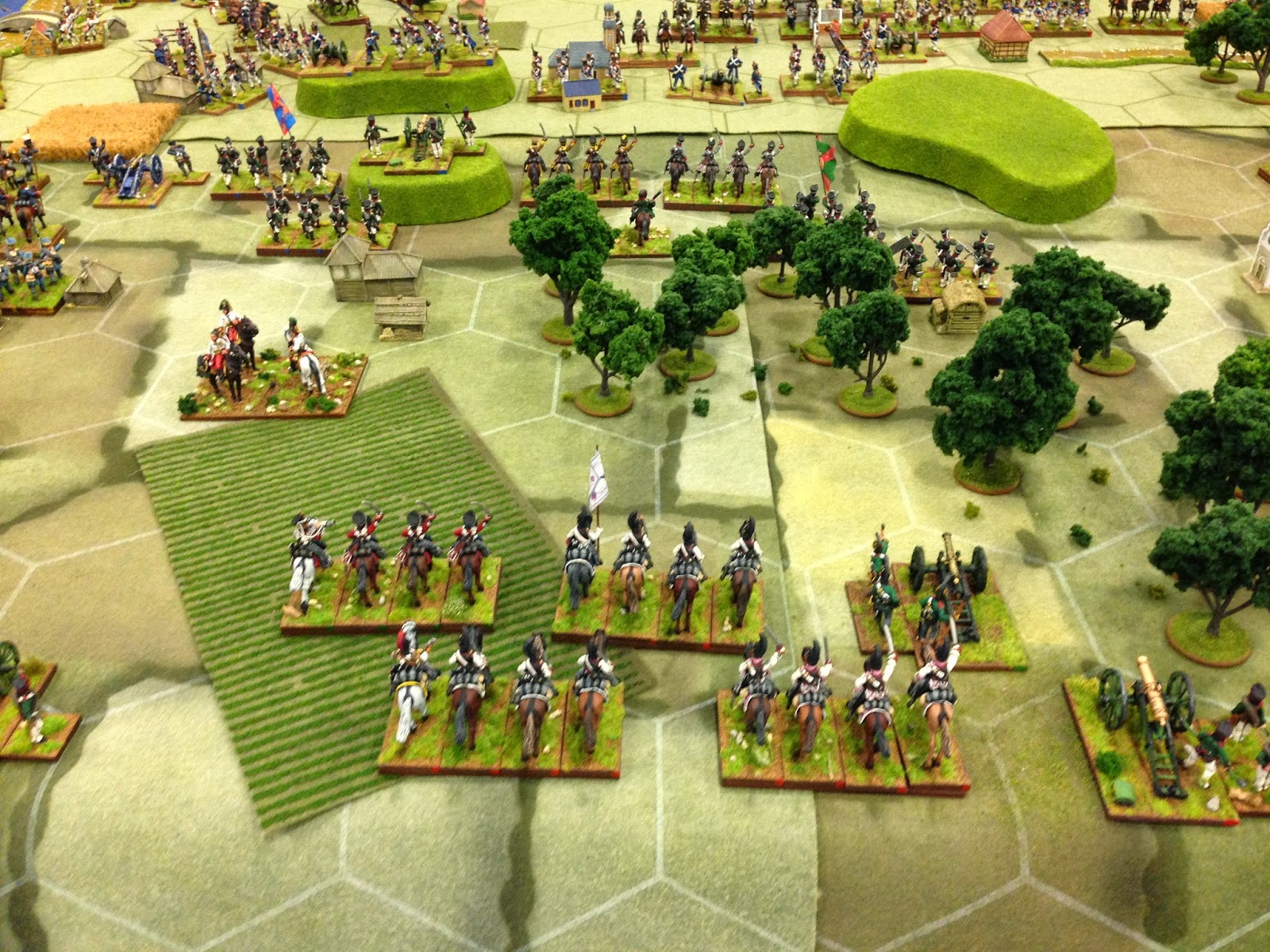 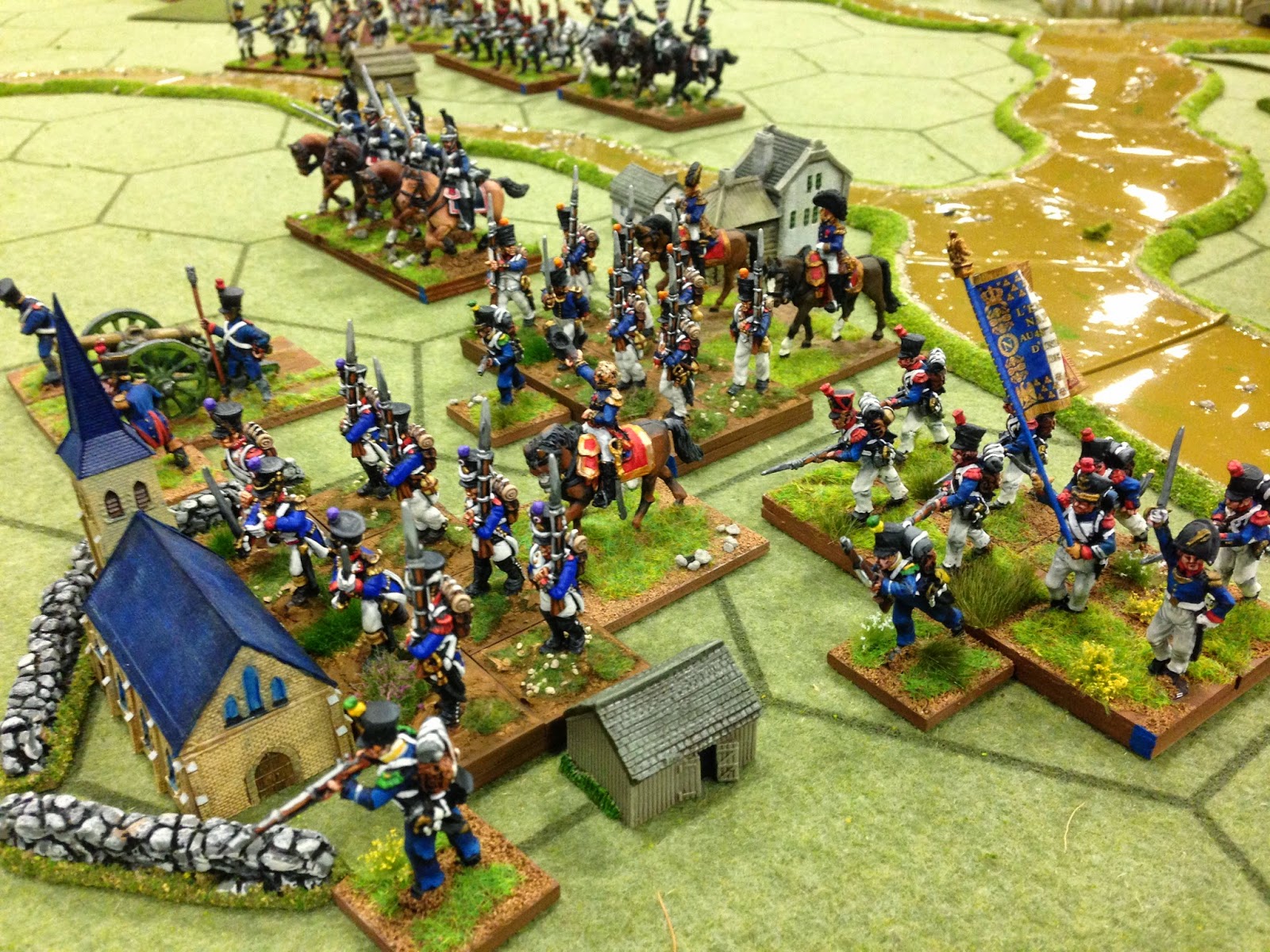 And here he comes... 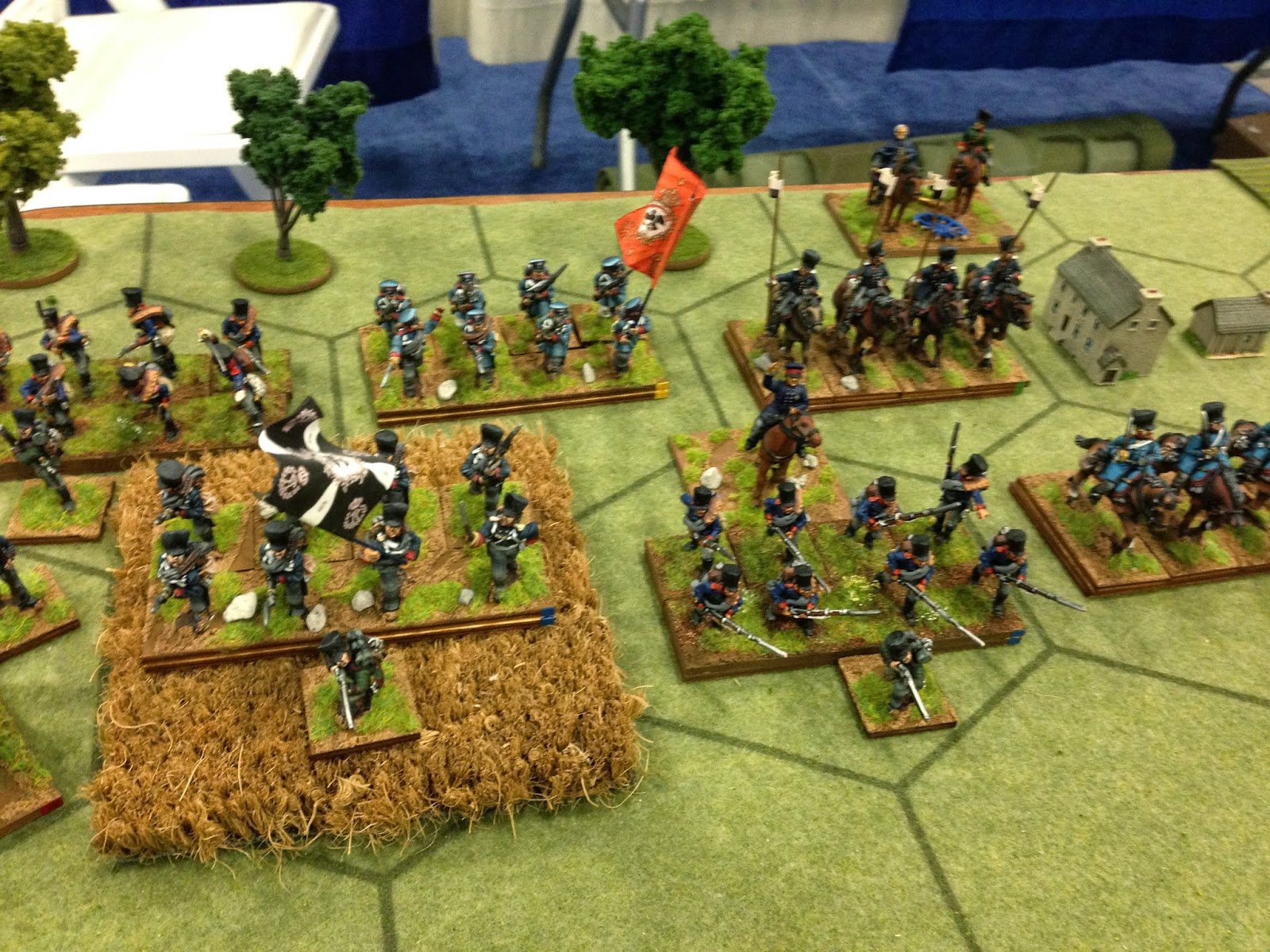 The game took 4 1/2 hours including rules explanation (as always, I used my version of Command & Colors: Napoleon). 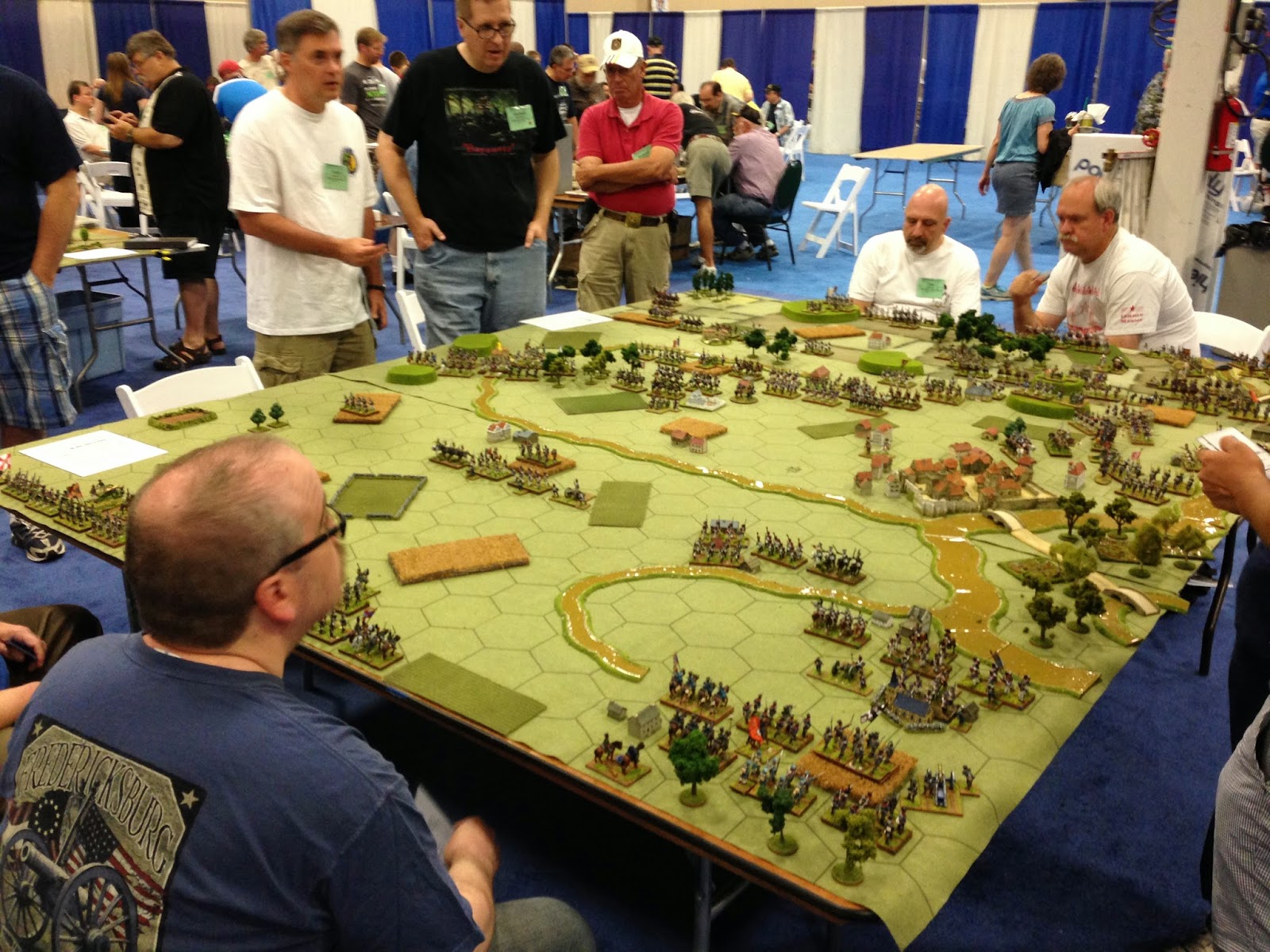 Results: In the North, the French chose to not send aid across the bridge to keep their line of retreat open (do or die!), and to send the Reserve Cavalry from the South to the North. This meant that they had plenty of troops to deal with Blucher. In fact, they destroyed York's Corps and drove Sacken and Langeron's Corps back with heavy losses. When Reynier's French Corps arrived on Day Two, the combined French attack almost destroyed the Russians. The result was a victory in the North that opened a new retreat route for the French army.

In the South, both sides charged and counter-charged; blasted each other with massed artillery, and generally mauled each other. It was a bloody draw with appalling losses on both sides. At one point, after the French losses had become very severe, three units of MacDonald's Corps (Westphalians, Italians, and Wurttembergers) fled the field.
Late on Day Two, after a last-ditch assault by the Guard petered out without a decisive result, and massive Allied reinforcements were nearing the battlefield from both North and South, Napoleon decided that he had better withdraw his mangled army while he was able.
The battle was a tactical victory for the French, but an operational defeat since they were unable to crush the Allies piecemeal.

I think that the players had a great time, and I certainly did, though I was pretty beat afterward, having been on my feet and jumping around for something like 11 hours.