I had the opportunity to put on my giant version of 1775: Rebellion (see the July post for details of the game) at Gen Con this year.  I ran it at noon on Saturday in the Miniatures area.  Here are some pictures: 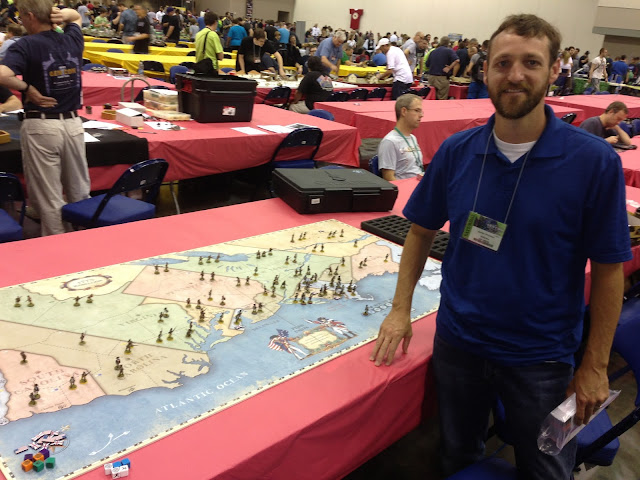 My buddy Jacoby helped me set up.  Thanks Coby! 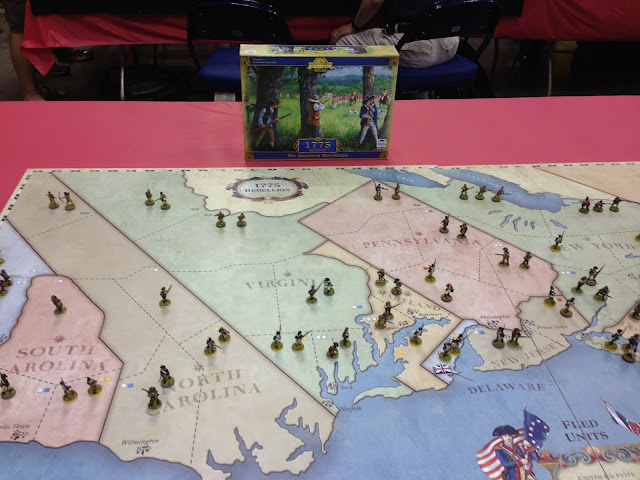 The game is ready! 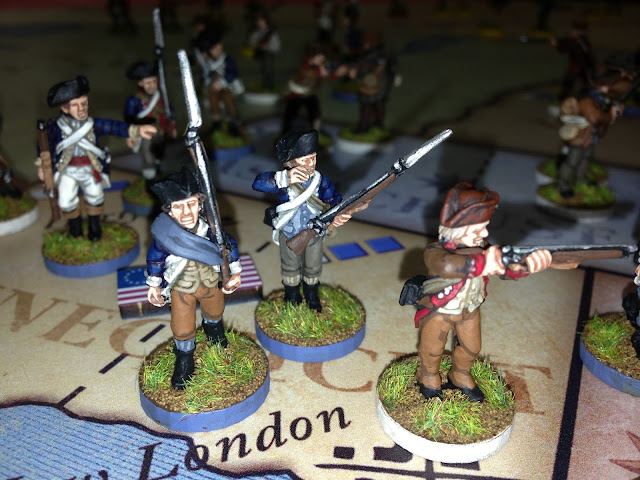 Close-up of the Connecticut Militia and Regulars. 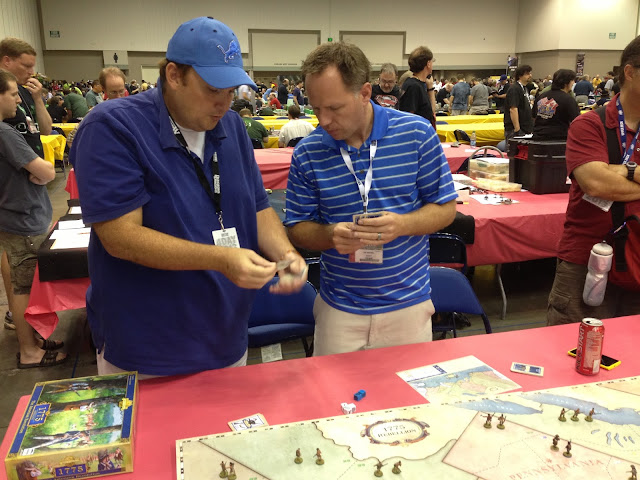 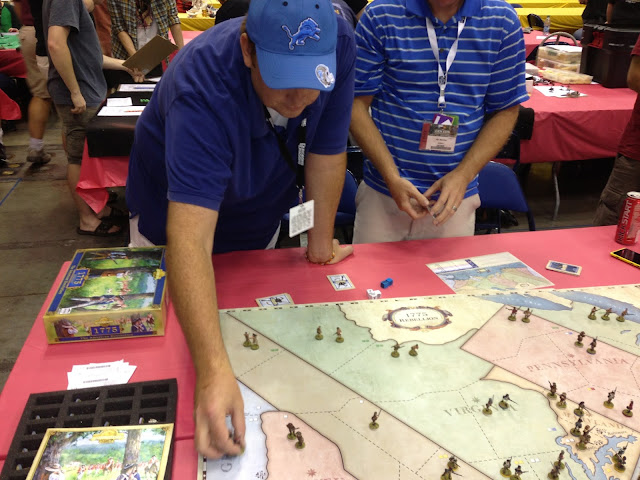 They opted for an early Southern strategy. 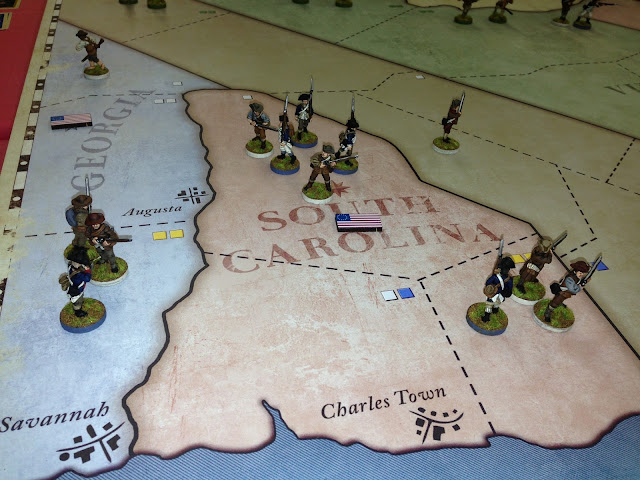 ...and took Georgia and South Carolina. 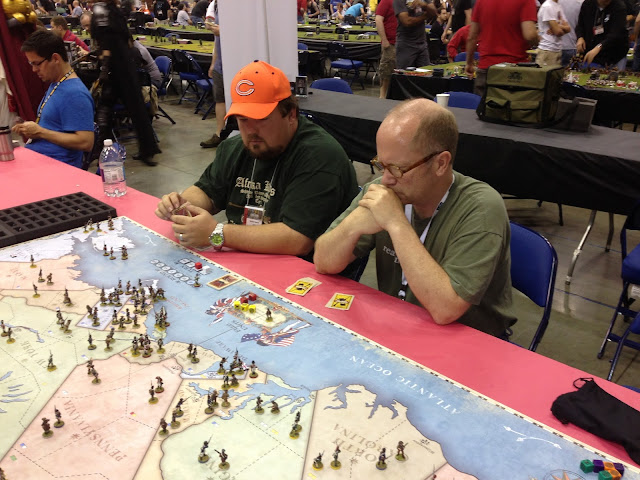 Team Britain countered with a robust attack from Canada and New Jersey.

After escalating battles around New England and the central colonies, the Americans won a couple of climactic battles to secure New England, and then used this as a base to drive north and win the game by a narrow margin.

The game took three hours as both sides were very deliberate in making their moves, but the quality of the strategies that resulted were very strong.  The momentum swung back and forth a couple of times.  All-in-all a fun day.  I really like this game and am glad to have a premium version of it.

Excellent figures by Calpe. I really like their chunky figures with lots of authentic poses. 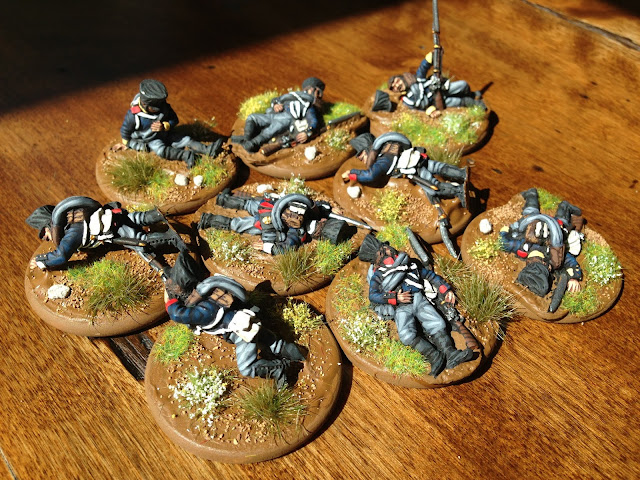 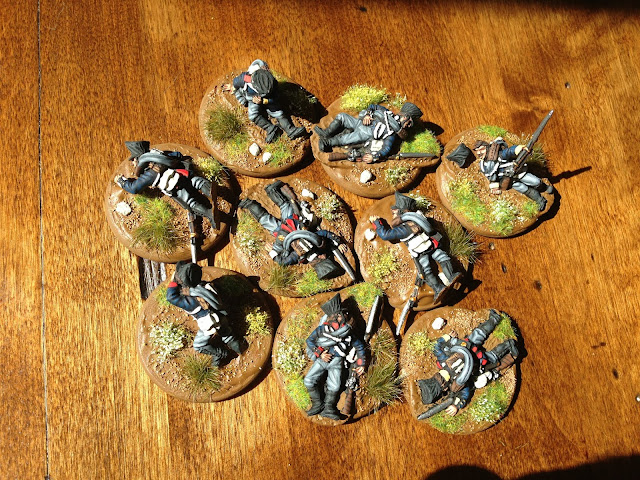 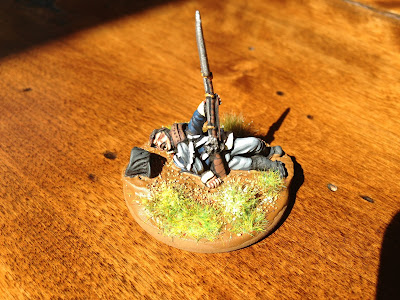 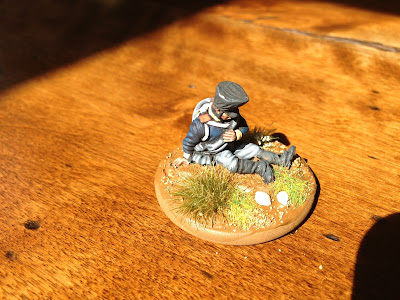 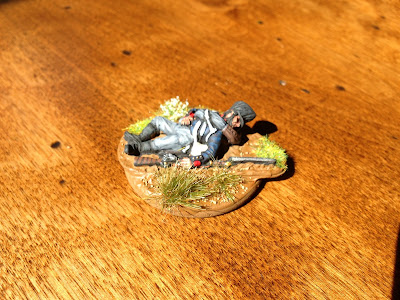 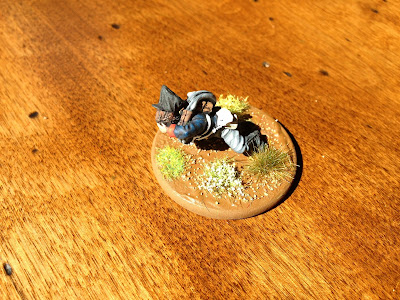 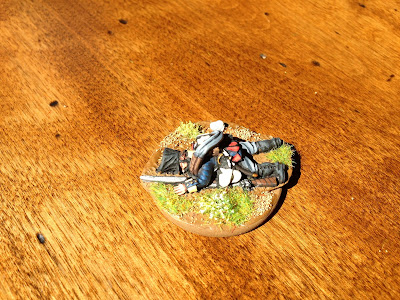 Posted by gdrover at 1:40 PM No comments:

While this wasn't the reason I acquired my new 15mm Napoleonic armies (I'll be posting about that in the next blog post), it seemed like a great opportunity to break in the new version of Napoleon from Columbia Games that just showed up last week. My friend Uwe Walentin was visiting from Germany and when we weren't hiking in the Cascades, we were war gaming (1775 and this).

The idea was to use the 15mm figs instead of the blocks.  Less secrecy for sure, but a really cool way to use the miniatures.  And then, when a battle occurred, we would fight it out on the tabletop with my 28mm armies and my homebrew Command & Colors rules. 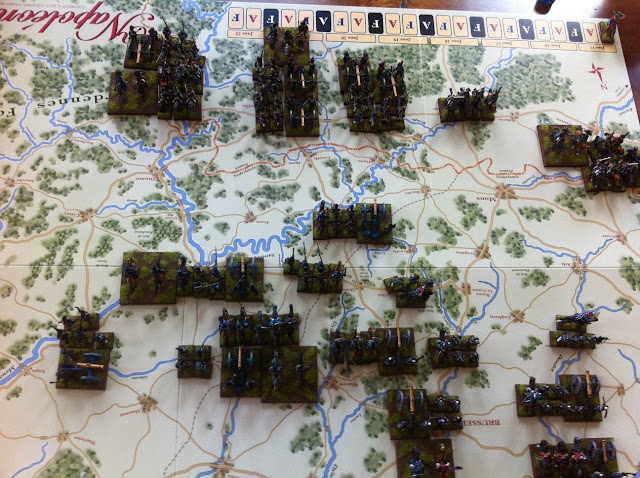 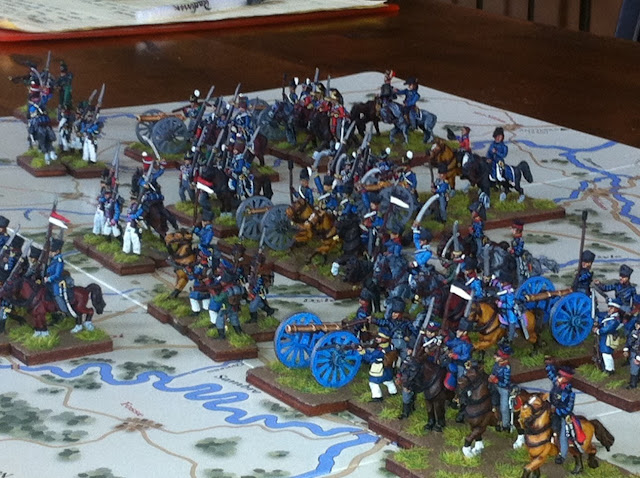 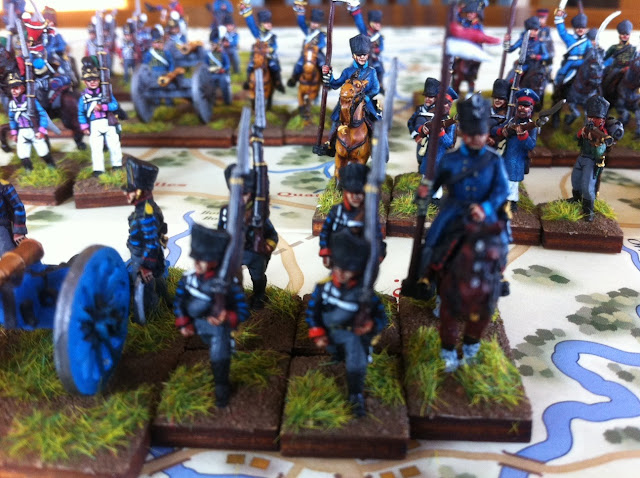 Figures painted by 15mm Napoleonic specialist Ron Redworth out of the UK. 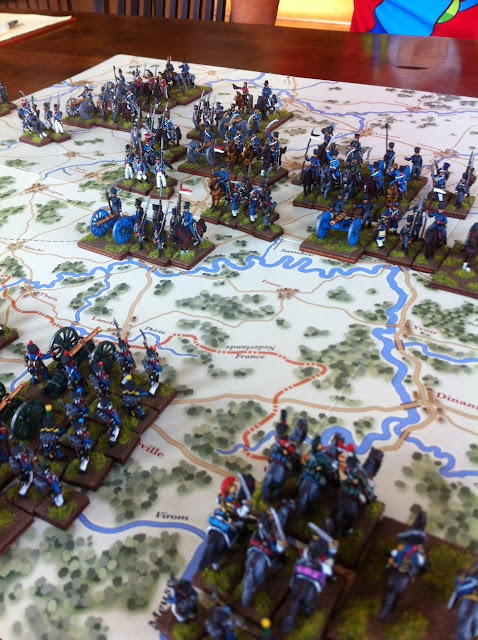 Uwe was the French and he maneuvered aggressively toward Liege, threatening the Prussian Supply Line.  He took it with a lone Cavalry Division after some hard force-marching. I drove them out with three Cavalry Divisions, and was then driven out in turn by a medium sized mixed force.
During all this, I was able to unite my British and Prussian forces and push Napoleon out of Charleroi.  The Prussian army would eventually disintegrate from lack of supply, but the time that would take would ensure that the French would lose the campaign.  Therefore, Uwe marshaled his forces and attacked Cherleroi with a small force of Imperial Guard troops as a vanguard, supported by a much larger force entering the battle slowly as reinforcements.

I gave up the advantage of the riverline defense and deployed forward to batter the vanguard before the rest of the French army could come up. 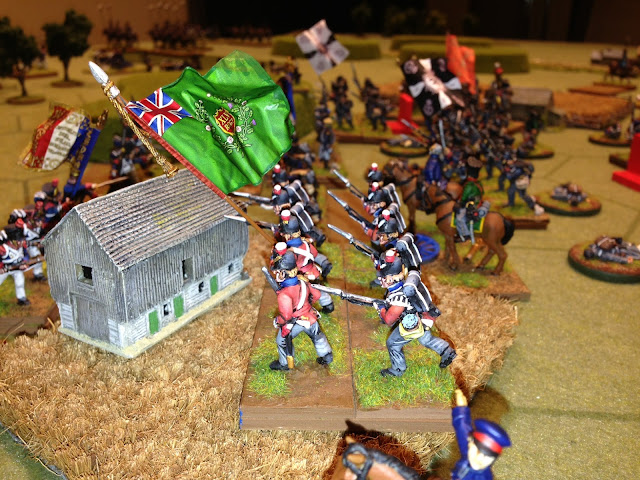 28mm units fight it out on the battlefield at Charleroi. 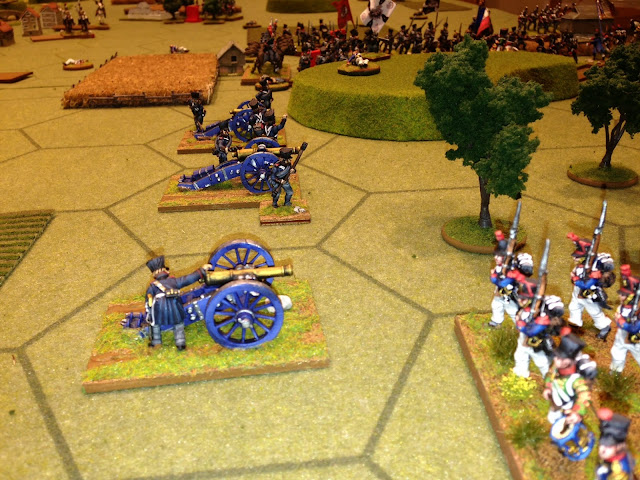 It was a bloody affair for both sides, especially for our cavalry forces, which charged repeatedly to keep the enemies infantry in square. The losses were very high. 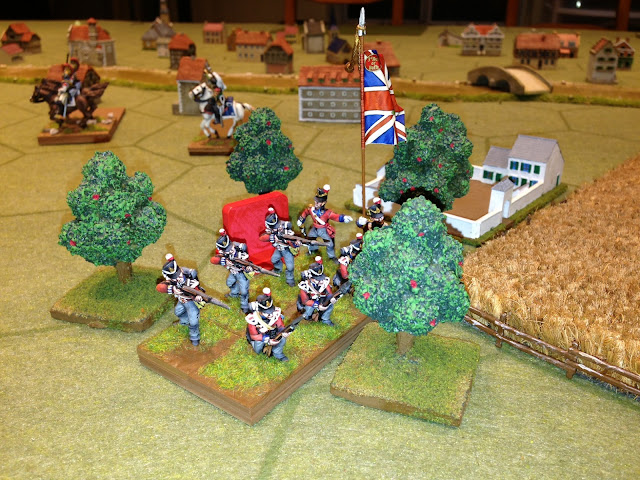 Here a British force stands in square in an orchard as French Cavalry run free in this part of the battlefield (they had entered behind the main action as reinforcements). 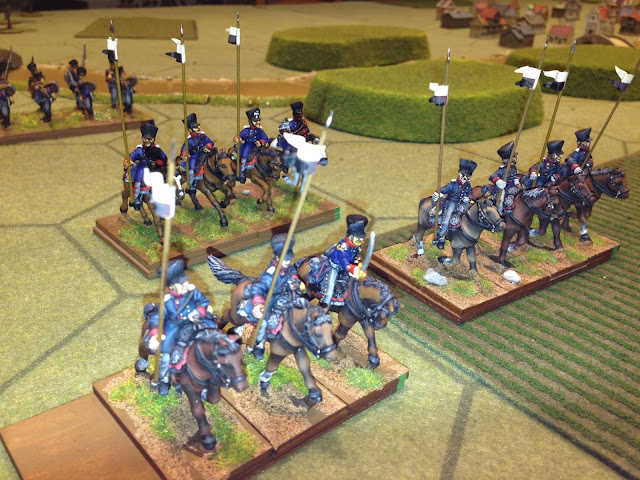 Here waits my remaining cavalry reserve on the other side of the field.

The battle ended in a bloody draw, which meant disaster for the French campaign. Time ran out and the French were forced to retreat back to France to defend their borders from the converging allied armies.