I opened a package that contained this proud figure on Saturday and his flag came spilling out. It had snapped off, and even worse, the decals on both sides had dried out and were cracking and flaking off.

I immediately sat down to see if I could rescue the flag. I used crazy glue liberally in hopes of keeping the bits and parts of the decal in place. I didn't have much hope that it would work, but to my surprise it did...sort of. It was a pretty ugly, cloudy blob, but at least the flag stayed intact.

Next, I glued the flag back on the post, and since I knew that it would never stay, had to also glue to to the side of the rider's busby (which I absolutely hated doing, but it was the only way!)

After that cured, I set about touching up the flag as best I could to restore the color and continuity that the cracking and gluing had destroyed. Again, it was somewhat successful. At least enough to rescue the figure as a flag bearer instead of an odd looking trooper without a sword in hand.

And lastly, I touched up the paint and changed a few things that needed it: such as his blanket wrapped around his torso. The factory paint color was gray, but Keith Rocco shows it as green in his famous painting: 'A Chasseur's Fate'. 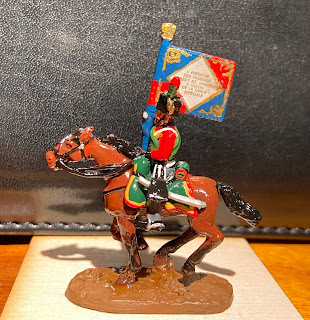 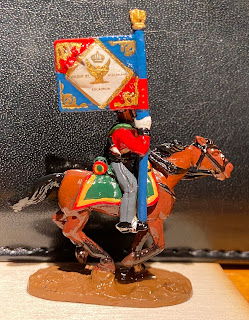 It's pretty easy to see the damage to the flag in these close-ups, but from a normal wargame table distance, the repair should be invisible. And if I position him in the middle of the three riders on his eventual base, it will hopefully prevent new damage from inadvertent gamer grabbing. Only a full-on drop will destroy my work. Let's hope that never happens to this survivor!

(Note: still need to touch up a couple of spots and do his base.)